It’s hard to lose an old friend with whom you’ve shared more than a  third of a century’s worth of experiences.

I’ll never forget the day it happened. I heard a coughing, spluttering noise, turned around and, sure enough, smoke was pouring out of the printer.

And not just any old printer – my trusty Epson MX-80F/T III, the first printer I ever bought.

At the time, I had a vague hunch about what had killed it – since confirmed by experience. It was a classic capacitor issue. Old electrolytic capacitors dry out and go on fire. Or at least up in smoke. Not that long after the Epson bit the dust, it happened to my wife’s 30 year-old sewing machine and I managed to fix that fairly easily. So I figured it was time to do the same with the Epson.

One of the reasons is that I want to use it. I always liked being able to print out program listings. And yes, I could print code on my laser printer, but it’s not the same. Program listings that aren’t on paper with perforated strips with holes at the side are just wrong. My plan is to make a serial-to-parallel adapter so that I can use a Raspberry Pi as a printer server. And I’ve taken some early steps down that road. But I need a working printer.

Getting inside wasn’t difficult. The main circuit board carries two sets of DIP switches, the settings of which, for reasons I can’t fully recall, I was always having to fiddle. I do remember that I often hauled the printer to various locations because of projects I was working on with non-printer-owning friends. It wasn’t uncommon for me to arrive somewhere, weak at the knees and sweating profusely because of carrying the dot matrix printer in one bag and a BBC Micro and disk drive in another. Laptop computers couldn’t come fast enough for me. 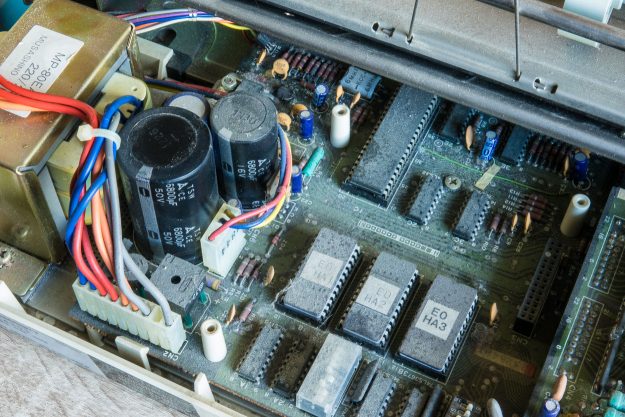 The top’s off. The biggest of those three big capacitors is the prime suspect in this investigation. But first I might have to do something about a third of a century’s worth of crud. Ugh! 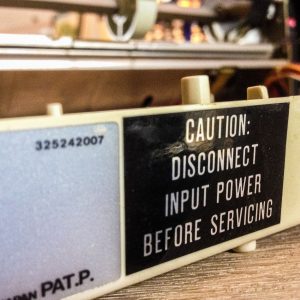 Anyway, the upshot was that I had to delve inside the printer so often that I didn’t bother replacing the screws that held the top half of the case to the bottom, and these screws were lost many years ago.

It’s interesting, by the way, that you were positively encouraged to open the case and configure the DIP switches. No manufacturer would do that today on a mains-powered device where the power supply isn’t fully encapsulated. Back then it was considered sufficient just to put a sticker on the back of the machine saying: “Caution: disconnect input power before servicing”.

Maybe printer owners were a tougher, smarter breed then. Or maybe they just died of electrocution in larger numbers and nobody cared. 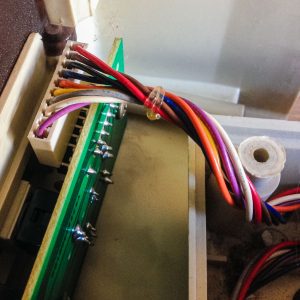 My first job was to take photographs of all the connectors. Not all of them are keyed, and while the way the wiring looms are arranged makes it difficult to plug them in the wrong way around, if there is a way to do that, I’ll find it.

(Side story: One day, back when I was deputy editor of MSX Computing magazine, I was chatting to a guy from a software vendor that specialised in solutions for farmers. The company had adopted MSX computers because they came with slots for software cartridges. And the advantage of the cartridges was that there’s only one way to insert them. “We tried with floppy disks,” the guy said. “But it turns out that, even with 3.5in disks, there are eight different ways to insert them, only one of which is right.” That software vendor didn’t have a very high opinion of farmers’ intelligence but there was no doubting their strength.)

Getting the main PCB board out was surprisingly easy. There was just one screw holding the board itself in place. Two more loosened the main printer hardware and I had to take out a couple more for a heatsink. 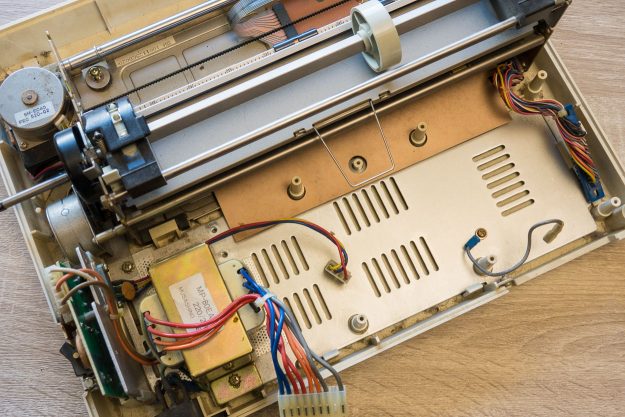 Board out. By my calculations that metal plate weighs just under a gajillion kilos. On an unrelated note, I’m not good at maths.

Service engineers must have loved this machine – not just because it comes apart so easily but because, in spite of having so few fasteners, it’s built like a tank. Everything is rock-solid. Underneath the main PCB is a thick steel plate that acts as a ground and a heat sink. It’s also the reason my knees got so wobbly carrying this thing around. 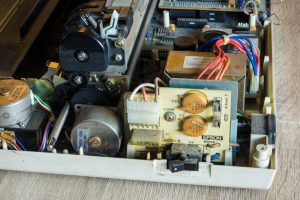 The electronics are delightfully old school. I spent a fair time scrutinising the PCB for dried-out solder joints, but also quite a lot of time just admiring it as a work of art. There’s something about old resistors and capacitors…

I also tried to see if I could identify the chips. Most are standard 74-series logic. There are three with labels that are obviously custom ROMS. And there are three 40-pin NEC chips. The D8041C is a microcontroller that the manual (found on Archive.org) refers to as a ‘slave CPU’ driving signals for the print head stepper motors. Next to it is a D8155C which I’ve found described as a ‘2048-bit static MOS RAM with I/O ports and timer’. The manual says it operates under the control of the 8049, which we’ll come to in a moment. The 8155’s PC2 port is used as the input port for the strobe pulse and ports PA0-PA7 are used for incoming data. The 256-byte memory is the printer’s buffer. 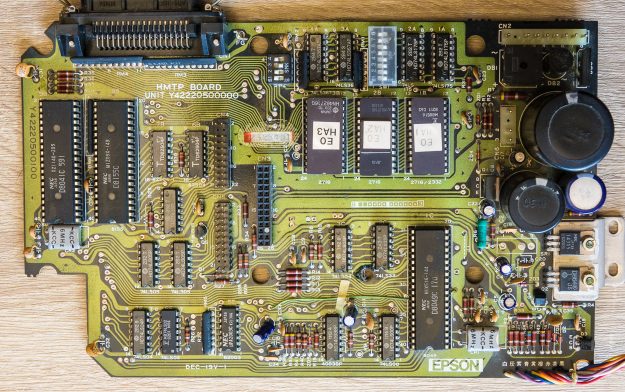 On the other side of the board is a D8049C. Googling for this chip I kept getting routed to eBay auctions by people who clearly know nothing about it but think it’s valuable, or to those scummy datasheet sites that claim to have a datasheet but don’t. Google throws up lots of hits relating to Korg synthesisers – I’ve seen the chip described as a ‘key assigner’ or ‘keyboard processor’. I also found a reference to it as a variant of the Intel 8048 microcontroller, and I did see one reference to it as a ‘mask ROM CPU’.

When I finally found the manual it said it’s the printer’s main controller, running at 6MHz. So mystery solved.