I’m building a rig to digitise my large selection of 35mm transparencies and negatives and in the process I’ve encountered what could be one of the worst electronic products I’ve ever bought. And in the spirit of the ineffable Big Clive, I thought I’d share my adventures in taking it apart.

In some ways this belongs over on my photography website, but at least some of the stages of this project might be of interest to people here.

So here’s the thing: I have a large and expensive Nikon scanner. But it’s in desperate need of a clean, uses an obsolete Firewire interface and is glacially slow to use. I also have a 36MP DSLR camera and know of other people who’ve had great success using their cameras to re-photograph slides and negatives. But you need a rig to hold the camera and film securely and repeatably in place.

One solution is to repurpose old Beseler slide copiers, and I know one photographer who’s done just this. But the solution set him back a couple of grand in the end. 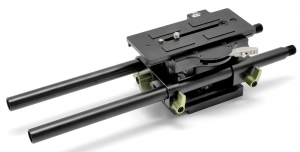 I already have a way of mounting the camera on a rail system – it’s the rig I use for shooting video. The camera is held securely on a baseplate with rails sticking out the front for attaching accessories. It’s possible to move the camera forward and backward to make small adjustments. With my 105mm macro lens attached, all I need is some way of mounting the film in front of the camera (we’ll worry about lighting later).

I do have the slide and film holders from my Nikon scanner, but the orientation of the images doesn’t quite work. So I googled ‘film slide holder’ and found holders designed for other scanners that might do the job. But there were two snags: a film holder and a slide holder would cost around $20 each; and I still have to rig some way of holding the holders – that is, attaching them to the rails. 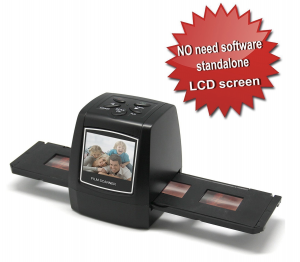 And then, quite by chance, I stumbled across the Digitnow! picture ‘scanner’. The quote marks are mine because, of course, it’s not a scanner. It was perfectly obvious from the design that this is a webcam in a box. What’s more, as the description boasts, it’s ‘No need software standalone’. I don’t know what that means, but I’m sure it’s nice.

Okay, I do know what that means. You don’t need any software on your computer. In fact, you don’t need a computer. Plug in an SD card (not supplied), slide in a slide, and press the button. The image is saved to the card.

Now, I knew this wasn’t going to solve my slide digitisation needs. It’s only 5MP resolution (10MP if you’ll accept interpolation, which I won’t) and it saves to Jpeg. Plus, at this price, I had a hunch the image quality wouldn’t be up to much.

Oh boy was I right.

Here’s a slide scanned with this device. If you squint really hard you can just about make out an image. This must have been what the early pioneers of photography felt like. 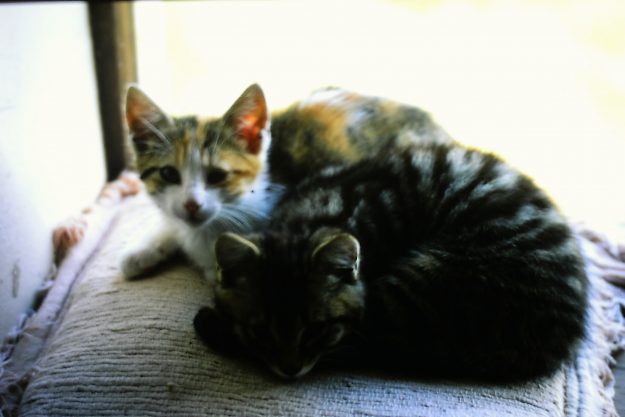 Trust me, the original slide is very sharp and actually had shadow detail. Here’s another gem: 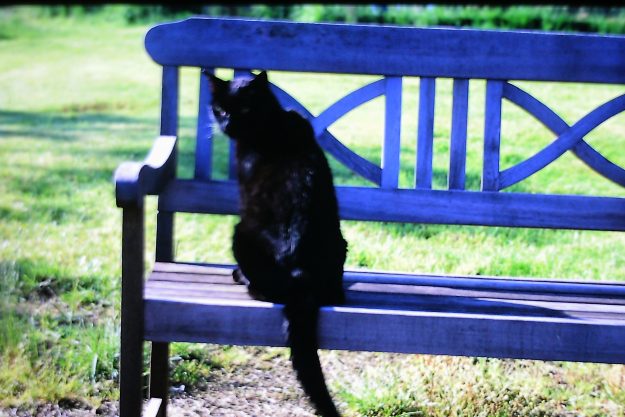 Note the gross over-saturation of colours as well as the glorious ‘shot through the bottom of a beer glass’ effect. These are just random snapshots I had lying around but even so the Digitnow! isn’t doing them justice. I mean, my expectations were low, but this product came in well below them. In short, it’s shit.

But that’s okay because it was always my intention of gutting it. For the price of two film holders I got two film holders plus the box they are designed to slide through. Cut off the top, cut a hole in the back for the light to come through and lo! You have something I can bolt to the rails of my camera rig.

So out came the screwdrivers and spudgers and apart came the Digitnow! (I do like that exclamation mark – it’s the best feature of the product.) 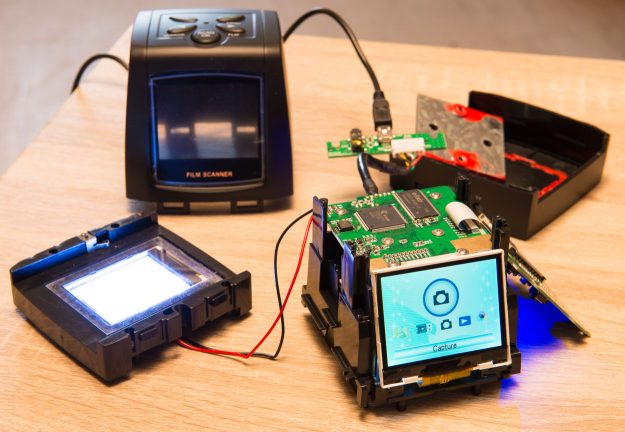 And it turned out to be pretty much what I was expecting.

At the very bottom was a heavy metal plate put there, I presume, purely as ballast to stop the poor little thing tipping over when you use it.

Just above that was a module providing a light source and also a spring that drops into notches on the film holders. This makes positioning of the image surprisingly easy and positive. 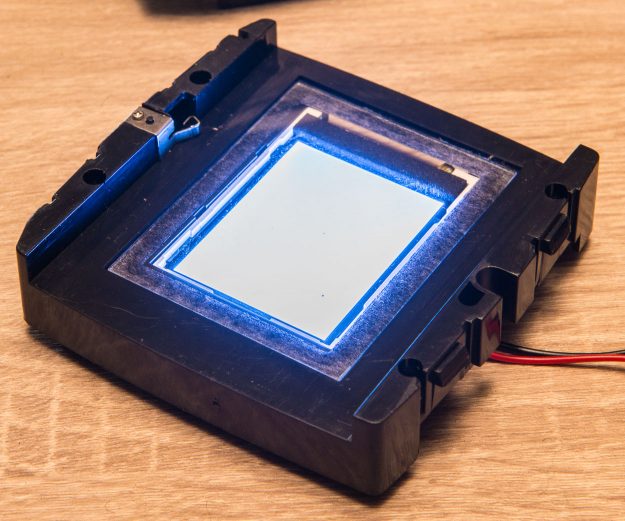 The light source itself is a daylight balanced, full-spectrum, wide-gamut photometric panel.

It’s a backlight unit for a cheap LCD display – or put another way, it’s an LCD panel without the LCD. The chances of you getting any kind of decent colour rendition from this are below zero. But it produces quite a lot of light from a 3V3 supply, so it might be fun to play with. It’ll be going in the bits box.

At the top of the device were two circuit boards, one on top of the other. The top one holds the SD card reader and the top-panel buttons. The board below does all the work. 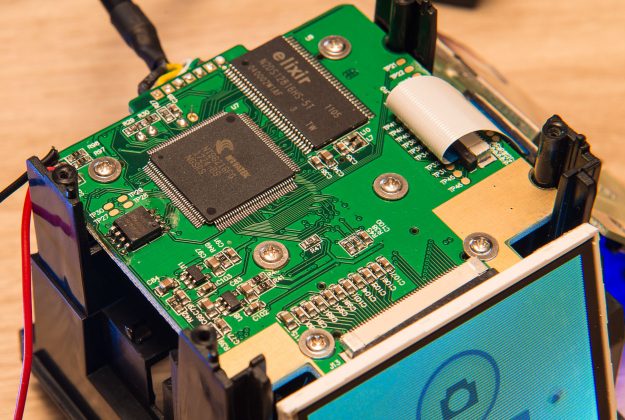 There are two main chips on this board, both somewhat obscure. One is the Novatek NT96216FG and the other is the exotically named Elixir N2DS12816HS-5T. 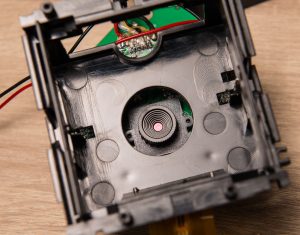 Googling for these availed me little. Novatek Microelectronics is a Taiwanese firm that seems to specialise in LCD display driver chips, so I’m guessing that that’s what this one is doing. It may have much of the image-processing capability built in. The Elixir’s name first suggested to me that it’s a RAM chip of some kind, but I’m now thinking it’s perhaps a microcontroller. There’s another eight-pin chip that turned out to be a Winbond 25032FVSIG 32Mbit serial flash memory.

Underneath this board is the camera. And that’s all I want to say about that.

The good thing is that this device came apart rather nicely. The only thing that was glued (apart from that metal weight) was the main display on the front, and that popped off easily enough. So the whole thing still functions. Could I use it as a camera? Here’s a photo I took of my work bench. 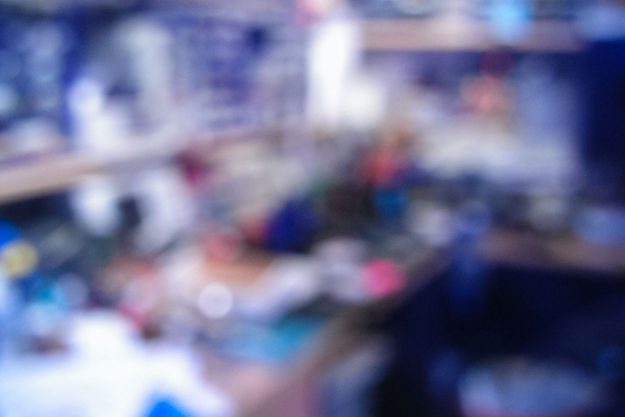 Spotted the problem? Yup – it’s designed for macro ranges. Still, it’ll be fun to play with. And, importantly, I now have those film holders and something to hold them. 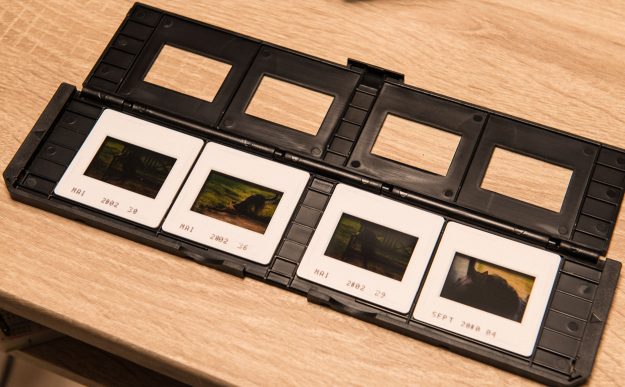