In Part 1 we got the SPI bus set up on an AVR ATMEGA328P microcontroller. Now let’s start using it.

Before we get going, we need to set up the pins for the SPI bus on the AVR (which we’re using in master mode). I’m using the ATMEGA328P here, so I’m going to define some macros to make things clearer. You can adapt these to your needs if using a different microcontroller.

Now let’s use these to set up the pins.

To simplify matters later, we might also want to set up a couple of macros to control the SS line.

Now we’re set up, let’s look at the register that does all the hard work.

This is the third of the key SPI registers and it works like magic. Just write a byte to this register and the AVR will fire up SPI and send the whole byte of data down the wires without any further work on your part. And thanks to that dance between shift registers that I mentioned in the first part, when it’s done doing that, that same SPDR now contains the incoming data. So an exchange of data between master and slave consists of the master doing this:

That’s it. How do we know if the exchange is complete? Simple – the SPIF bit in the SPSR register gets set. So all you need do is wait for that. In the example below we simply hang around in a while loop. That’s blocking and you might find it wasteful of clock cycles if your microcontroller is hard-pressed. If so, you’ll want to look into enabling SPI interrupts that will get triggered when SPIF gets set. You can then get on with other things while the SPI data exchange takes place. But that’s a bit advanced for this post.

So here’s a bit of code that sends a byte of data over SPI and gets one back.

And that’s it! SPDR now contains whatever was sent back by the slave – most likely nothing of any interest.

And that’s the bit about SPI that can catch you out. The byte that the master just sent to the slave may have been a command of some kind. To get the slave’s response, just send another byte of any arbitrary value and the slave will send you its response.

In fact, you might have to send and receive multiple bytes. I mentioned in Part 1 that I’d messed around with a serial RAM chip. Here’s how you go about writing a value to a memory location on that chip:

So in this case, all the traffic is one-way and all the data coming back from the chip (actually just zeroes) is thrown away. Now let’s read a value from a memory location. This is what you do:

The value held at the memory location is now in SPDR.

And here’s what that looks like on an oscilloscope. 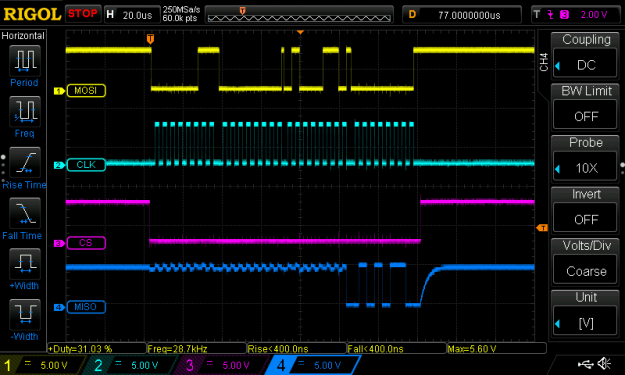 That might seem like a lot of work to get one byte of data from the memory. But the 23LCV512 is typical of many SPI devices in that, once the initial contact is made, continually prodding it will return more information.

So, for example, if you wanted to get 32 bytes of data, you’d use the same process as described above, just sending the start address, but at step 5, instead of sending one byte’s worth of junk data – in order to prompt the slave into sending data back – you’d send 32 of them. But not all at once. After each byte, you’d need to retrieve what’s been set in SPDR and store it somewhere because that’s about to get overwritten after you send the next junk byte.

And that’s it for basic SPI use.