Some mechanical keyboard enthusiasts talk about the ‘end game’ – finally reaching the perfect combination of layout, switches and key caps. Others say you never get there – that there is always another keycap set to buy, always another switch you haven’t tried, always a layout you hadn’t considered.

I don’t care about any of that crap. I just want a good keyboard that doesn’t make my fingers hurt.

Which is why, I guess, that my only way of reaching any kind of end game is to run out of money. Because there are always more keyboards.

I thought I’d tried all the ones that matter. I turned to mechanical keyboards because of my issues with osteoarthritis in my finger joints. By and large, my choice came down to Cherry MX blue or brown switches. Which one is better depends on my mood and I’ll change keyboard every couple of weeks or so.

My experiment with Topre-like switches on the Plum keyboard wasn’t an unmitigated success. I try it again every now and then. And I like it for a day. But somehow the thwok-thwok of the ‘rubber domes with hype’ approach starts to annoy.

But there is another option that I hadn’t tried – or, at least, not lately.

Back in the day, I used an Apple Extended Keyboard II with my Mac Quadra. I enjoyed typing on that board so much, I ended up writing a novel. I still have the keyboard, although the computer was stolen. (Yep, without the keyboard. Nobody said burglars had to be smart.) I can’t use it, though, because it’s way too big for my workstation setup. 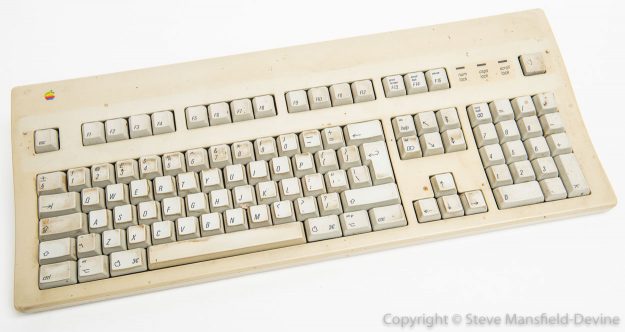 My Apple Extended Keyboard II – and yes, it needs a bit of a clean…

Then I read about Matias keyboards. Long story short – Canadian firm Matias produced keyboards using the same Alps switches used in the best Apple keyboards. When Alps went out of business, Matias first bought up the remaining stock of switches, then turned to manufacturing a clone of them.

Getting my hands on a Matias keyboard turned out to be a lengthy process. Matias itself wanted a ridiculous amount for shipping the board to France. I found a UK company that sold them, but didn’t have them in stock. But I put in an order anyway. And about four months later I had the Mini Tactile Pro plugged into my iMac. 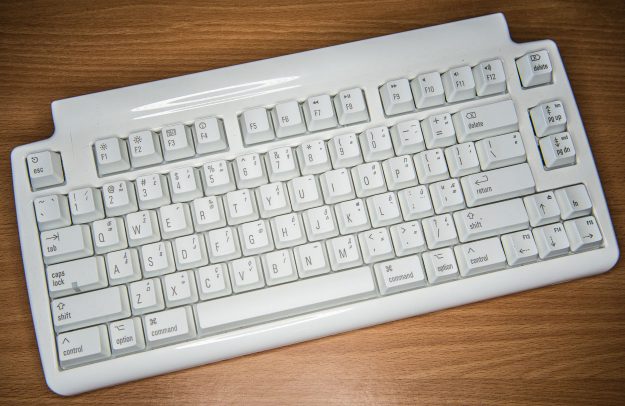 Immediate impressions are good and bad.

This keyboard is designed specifically for the Mac, so no compatibility issues. And special functions, such as volume control, are easily accessible via a function (Fn) key.

The keys require a fair amount of activation force, so I’m having to change the way I press down, otherwise I think the effort needed will be too tiring and painful. If you don’t have arthritis and prefer a slightly stiff action to keys then you may like this.

This probably counts as a 70% keyboard. You have proper function keys, cursor keys, page up and page down (doubling as home and end via the Fn key, and a forward delete key. So it has only four (by my counting) fewer keys than the ten keyless (TKL) layout I’m accustomed to with my Code and KÛL boards, which are the ones I use the most. And the functions of those keys – and plenty more besides – are available via special key combinations. I found myself quickly adapting to the very compact layout.

The keycaps are terrible. I think they’ve chosen a font to echo the original Apple keyboards, and if they’d stopped at printing the main legends it would have been fine. But Matias has also added the special symbols you can type using the Opt and Shift-Opt combinations. Sadly, these are printed so small it’s hard to find the symbol you want and they just end up making the keys look a mess. It’s not helped by the fact that the legends are printed in grey on white. Readability was clearly not at the top of the designer’s priority list. 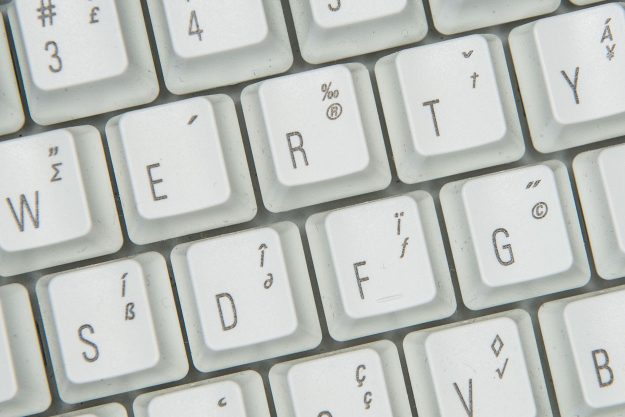 This wouldn’t be a problem if it wasn’t so hard to find attractive third-party keycap sets compatible with Alps-type switches.

One plus, though, is that the Caps Lock key has a built-in LED. And another is that the board comes with two USB ports, one each side, towards the back. Back in the day, this is exactly where you would find ADB ports on the best Apple keyboards, allowing you to plug in a mouse for left- or right-handed use. It also meant one fewer wire snaking to the computer. On the Matias board, both USB ports are free (the connection to the computer is via a micro-USB socket on the keyboard) so you can plug in a mouse and, say, a flashdrive, phone or camera. 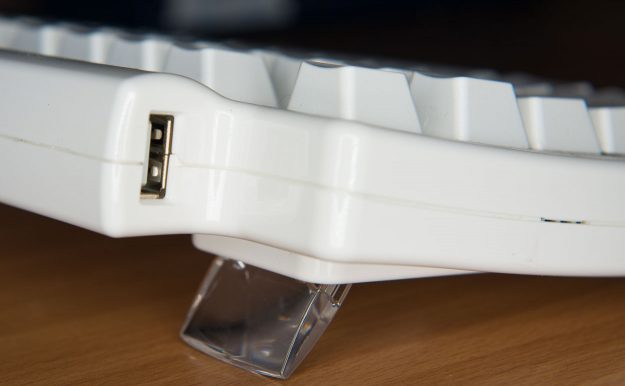 USB port – one of two

So what’s it like to use the Matias Mini Tactile Pro? Does it feel like my old Apple Extended Keyboard II?

I’d say the Matias has a harder and slightly more clunky feel – somewhere between the Apple board and the IBM Model M. (Which is to say, what I remember the Model M feeling like – I haven’t got one.) It’s also loud, which doesn’t bother me as I work from home in my own office (although my More Significant Other did call up to me last night from the living room to say, ‘what on earth are you doing?’). If that sounds negative, I don’t mean it to be. In fact, if I needed to pick just one word to describe the feel of typing on this keyboard it would be ‘positive’.

A little too positive, perhaps.

I can see how anyone who likes tactile keys would easily fall in love with this keyboard. It has the two enviable qualities of a tactile board – click and thunk. If you prefer a compact board and can find some alternative keycaps for it, the Matias Mini Tactile Pro is a winner.

With my arthritis, though, I’ve yet to be won over. The keys require just a little too much force for my liking. Nevertheless, I’m typing on it now and thinking that I might include it in my keyboard rotation, swapping regularly between this, the Code and the Kûl (and maybe the Input Club K-Type – but more of that later).