I’ve wanted an Altair 8800 for a long time now. It’s not that you can do much with it. But it is such an important part of computing history. 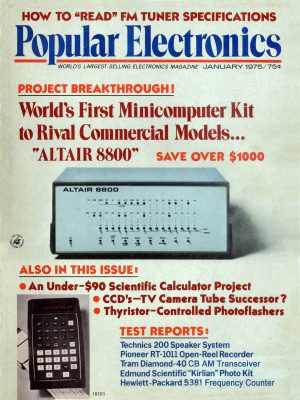 Famously, the January 1975 edition of Popular Electronics featured the Altair 8800. Or rather, it featured a non-working prototype. The first working machine had gone missing in the post.

The magazine was keen to give its readers a home computer project because a rival had already done so. Radio-Electronics ran a story on the Mark 8 computer, based on the 8008 processor chip, in its July 1974 issue.

But history works in mysterious ways. Geeks endlessly argue about which was the first ‘real’ computer and which was the first home computer. What’s clear, though, is that the Mark 8 has become nothing more than a footnote in computing history while the Altair 8800, based on the more powerful 8080 processor, began a revolution. It opened the computing world to ordinary people and beget a community and a movement that would soon give us names like Apple and Micro-Soft (as it then was). 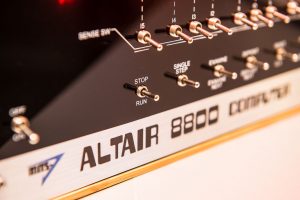 The Altair’s manufacturer, MITS, also started the trend in computing for taking orders for products that it couldn’t and wouldn’t fulfil for many months. It was a tradition that some of us would later enjoy with products such as the Sinclair Spectrum.

I was still at school with the Altair came out and not interested in electronics or computers, so its arrival passed me by. My first encounter with it was when I read Steven Levy’s seminal book Hackers. Although later raised on relatively simple computers, such as the Spectrum and BBC Micro, I had trouble getting my head around the idea of a micro with no keyboard and no display.

When those hardy, desperate souls who bought and built the original kit finally threw that power switch, their only way of interacting with the machine was to enter machine code programs one opcode or data byte at a time, laboriously setting the 16 front panel switches to control each bit. Even a very simple program might involve dozens of steps. And the output was always nothing more than a number represented in binary on the panel’s LEDs.

It was no way to live.

So it wasn’t long before people started hooking up teleprinters, tape readers and the like. The Altair also led to the creation of the hugely popular S100 bus, used for plugging in expansion cards – a foretaste of what we would all being doing for decades on machines ranging from the Apple II to the IBM PC and its countless clones.

The idea of being so ‘close to the metal’ fascinated me. And so did the fame and significance of this machine. I wanted an Altair.

Buying a working Altair 8800 was always out of the question. When decent samples become available they sell for thousands of dollars.

There is a very tempting clone – it matches the look and feel of the original, huge metal case and all. It’s built using modern components (nearly all of the box is empty) so there’s no S100 bus, if that’s important to you. And it’s still quite pricey for what is bound to be little more than a toy – over $600, and that’s before you start adding extras.

So I was thrilled to discover the Altair-Duino. This kit replicates the Altair using an Arduino Due – yes, a microcomputer replicated on a microcontroller. The front panel is slightly smaller than the original (5cm narrower and 2.5cm less in height). And it’s housed in a shallow bamboo box (which is optional if you want to find a nice big steel one). So it’s a lot less faithful to the original in looks, as well as architecture. But the experience is much the same – and it looks great. 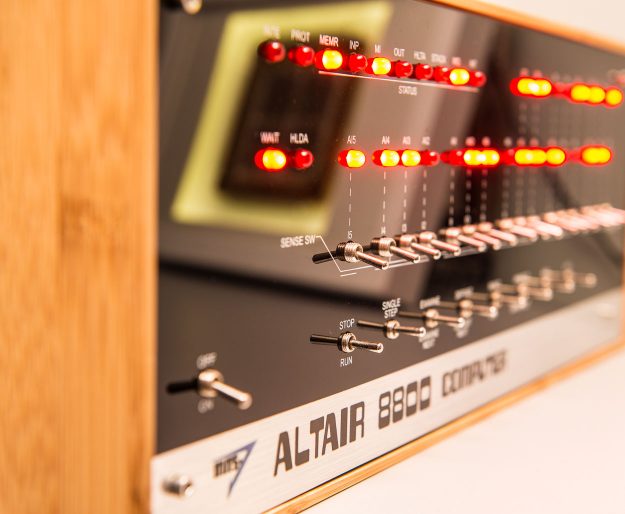 It is a kit, which means you’ll need to fire up the soldering iron. There’s no tricky soldering to be done – it’s all through-hole and very basic. But there’s a lot of it. I reckon I made 485 solder joints, but I may have forgotten a few somewhere along the way.

It’s all about connections

I went for the Bluetooth version of the kit. It seemed like the easiest way of getting a serial connection to it from a modern machine. The kit’s designer warns that, because of licensing issues, the Bluetooth connections won’t work with iOS devices. But the comments in the (lively and helpful) forum suggest that many computers have problems connecting, or dropping established connections. That was certainly the case with my iMac. A serial port version is also available, and it may be possible to convert from one to the other. However, it’s just as easy to use the Arduino’s USB port as a serial connection. 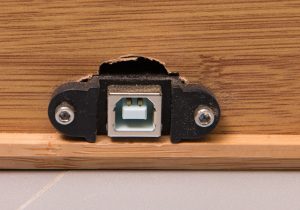 To make this easier, I’ve installed a short converter cable with a micro-USB plug at one end and a panel-mount USB Type B socket at the other. The latter is mounted on the back of the box. While I was waiting for this cable to arrive (on a slow boat from China) I simply drilled a hole in the back of the box and threaded a USB cable through it. When the panel-mount cable arrived, I realised it would have to be mounted flush with the bottom of the case to get clearance from the kit’s PCB. This resulted in a bit of the original hole appearing above the USB socket, which is ugly. I’ll pretty this up later because I have it in mind to paint the box. 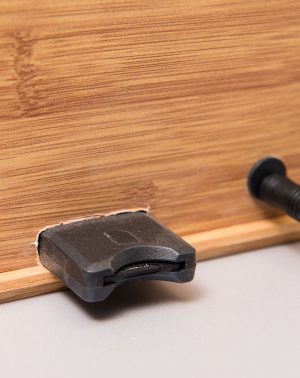 If you really squint, you can pretend the SD card is a floppy disk.

I also added a ribbon cable that has a micro-SD connector at one end and a box with an SD card slot at the other. This gives external access to the system’s SD card reader. I can imagine I’m slotting in floppy disks.

This is very much a toy, unlike my other replica, the PiDP. The latter is powered by a Raspberry Pi which is available for other tasks (I’m currently running the Mosquitto MQTT broker on it for some ESP8266-based IoT stuff I’m tinkering with). But the Arduino in the Altair-Duino is fully occupied running the machine.

But who cares? It’s a toy worth having and takes me just a little bit closer to understanding the excitement, back in 1975, when computers finally became available to everyone.