There’s a tough decision awaiting anyone who, like me, is about to get into designing their own printed circuit boards (PCBs) – what software to use.

An Electronic Design Automation (EDA) package is pretty much essential for any serious PCB work, and quite a lot of non-serious work too (which is where I come in). For those not familiar with the concept, EDA software is a form of computer-aided design (CAD) specifically for creating electronic circuits. You can draw schematics – your circuit represented in an abstracted form – and turn them into physical board designs. From these you can output files you can send to a fabrication (fab) house for manufacture of the PCBs themselves.

I started down this journey a year ago when, for my needs, the answer was easy. Eagle. But as we’ll see, things have changed and now KiCad seems like a viable alternative.

Why bother choosing? After all, both packages are free and available on all major platforms. The fact is, learning how to use one of these packages demands a major investment in time and effort. I was anxious about making the ‘wrong’ choice, which is why I’m writing this – to clarify my thoughts.

Eagle has become something of a standard among hobbyist users and smaller firms. (Higher-end professionals tend to go for weapons-grade EDAs such as Altium.) It started life with German company CadSoft, which was bought by Farnell in 2009 and was then sold to Autodesk last year – a move that has brought both improvements and controversy.

The reason for Eagle’s popularity among hobbyists is that you can get a free version, albeit with limitations. Boards are restricted in size to 100 x 80mm, with only two signal layers. There are limitations, too, with the handling of schematics. None of these seemed insurmountable problems for the kind of projects I had in mind.

But over the past couple of years I’d toyed with other EDAs, including KiCad, gEDA and even Fritzing – all of them open source, which is a thing I like. None of them looked like a serious candidate. Fritzing is easy to get to grips with but its limitations become apparent very quickly. And it seems to be developing at a snail’s pace (no new versions for over a year now and the last update was pretty meagre). KiCad was obviously more capable but its user interface was unintuitive (it still is, but more of that later). And gEDA looked like a brave but ultimately amateurish attempt.

Although I started messing with Eagle a year ago, I shelved it because of, you know, life. A few days ago I decided it was time to restart. And the first thing I did, of course, was check for an update. That’s when I encountered Autodesk which in turn got me thinking about my choice of EDA.

SPOILER ALERT: If you’re hoping I’m going to tell you which software to use … well, it’s not that easy.

The Eagle has updated

Now, even if you use the free version of Eagle, you’ll need a (free) Autodesk account. And the software does seem to do a lot of phoning home. 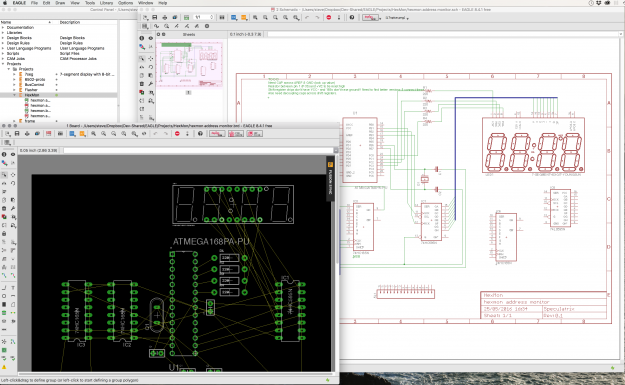 Project, schematic and board windows open in Eagle on the Mac.

I have version 8.4.1 installed and, according to smarter people than me, the move to version 8 did bring with it a lot of extra features and improvements. That’s the positive part of the acquisition by Autodesk. As arguably the world’s most famous CAD software firm it has the resources to do great things with Eagle.

On the other hand, Autodesk has introduced subscription-based charging for the paid-for versions of the software, much to the annoyance of huge numbers of people. And I feel their pain. As a photographer, I was intensely annoyed, a not a little impoverished, by Adobe’s switch to a subscription system for Lightroom and Photoshop.

On the face of it, Autodesk’s move doesn’t affect me. I’m using the free version. But nagging away at the back of my mind is the possibility that, at some point, I’m going to bump up against one of those limitations. And then there is KiCad.

KiCad has gone through a refresh too. The bump to version 4 is even more significant than Eagle’s graduation to 8. It feels to me like a step-change in the seriousness of the software. And if you want to be convinced about whether you can achieve great things with this software, just look at the ‘Made with KiCad‘ page. 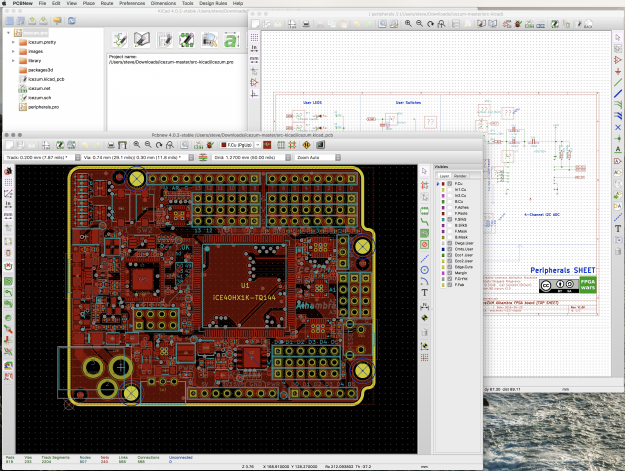 An example of KiCad in use.

What has given weight to this sense of KiCad growing up is the support it’s now getting from the likes of CERN and the Raspberry Pi Foundation.

There’s another factor, too. I was put off KiCad by the clumsiness of its UI. And while that hasn’t improved much, in the meantime I’ve actually tried using Eagle and found it’s every bit as bad, if not worse.

When you’re at an early stage of learning about electronics, either package is going to meet your needs. KiCad puts far fewer limits on your ability to grow, but who knows what the state of free EDA software will be when you get to the point of testing Eagle’s boundaries?

So how do you choose?

Well, here’s what I’m going to do. I’m not going to choose. I have a project in mind and I’m going to implement it in both packages. I hope that by the end of that experience I’ll have a clearer idea of which EDA software is right for me. And obviously I’m going to blog about that, so come with me…