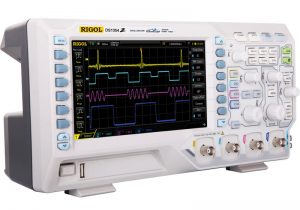 Most of the books about electronics for beginners in my library say something like this in the first chapter: ‘you don’t need an oscilloscope’.

Well, maybe need isn’t the right word. Yes, you can laboriously chart voltage levels from a capacitor by measuring at regular intervals with a multimeter (at least two of the books have you do this). But how much more satisfying it is to attach a scope probe and have it do all the work for you.

If, like me, your fascination with electronics is more about exploring and understanding than any ambition to be a professional, an oscilloscope is going to give you endless hours of fun. (And before you say anything, I know many people recommend a logic analyser rather than a scope for doing the kind of stuff I do, which is mainly about logic circuits, but it doesn’t have to be an either-or situation.)

It doesn’t have to be an expensive scope, either. As a birthday present to myself (yes, you’re allowed to do that, especially for birthdays ending in 0), I grabbed myself a Rigol DS1054Z. It’s very much an entry-level scope. But these days, ‘entry level’ means something very different to what it did even five years ago. This is basically a small computer and the features it offers, for around €330, are quite astonishing.

It’s also ungradeable. You can buy options such as serial decoding, where the scope displays the actual data being transmitted (in various forms, such as ASCII text or numeric values) for protocols such as I2C, SPI and more. You can also boost the bandwidth limit from 50MHz to 100MHz, increase the recording memory, add advanced triggers and more. All of these options are already present in the machine – they just need unlocking. Once you buy an upgrade, you just enter a key code into the machine and the option becomes available. Naturally, people have hacked this process and I believe you can find key generators online to unlock the options for free, but I’ve no idea where you’d find such things.

The first thing I did was hook it up to a little project I’m working on that involves a Teensy controlling an MCP23017 port expander. The chip is controlled via I2C, so this was the perfect opportunity to check out serial decoding.

I learned a couple of things early on. Be careful where you set the trigger level, and also set a suitable trigger. The I2C bus works by the lines being held high (using pullup resistors) and the data  and clock lines are pulsed by pulling them low. A trigger set for a falling edge therefore works better than one for a rising edge.

It’s also important to properly compensate the probes when you first get the machine. This is easy enough to do and this video is a good guide:

And as a general guide to getting going, this video ain’t bad either:

There’s a lot to learn, and the Rigol’s manual doesn’t provide much help beyond switching it on. Fortunately, we now have YouTube instead of manuals. Rigol itself has a whole bunch of useful videos here.

After just a few hours of poking around circuits with this thing I can see how useful it’s going to be. But more important, I can see how it will allow me to understand how circuits work and what they’re doing.

If you’re sitting on the fence about buying a scope – thinking, perhaps, that’s it’s too advanced for what you do – you might want to reconsider. After all, life isn’t just about the things you need.