Okay, so here’s a tip for anyone who, like me, prefers to make up their electronics projects as they go along – who simply doesn’t have time for all that planning and designing nonsense. Buy yourself a desoldering station.

Seriously – buy it before you even buy a soldering iron, just to be safe.

A quick recap: I decided that my Dreambox project would double as a reading light. I’d already built a circuit board that included a 12-channel PWM LED driver board to power four RGB LEDs. 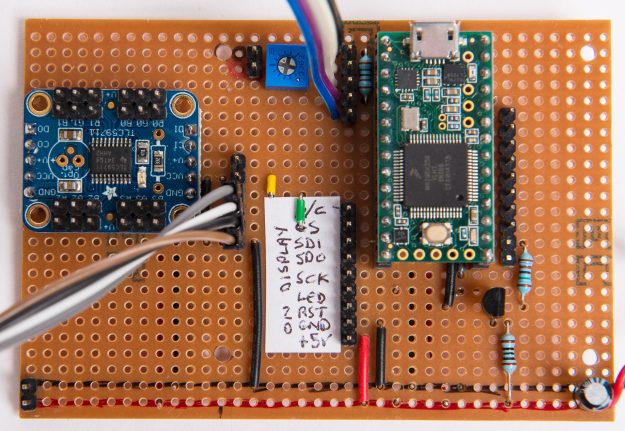 The circuit board for the Teensy

Now I’ve decided that breakout board is in the wrong place.

Here’s the thing. The new plan is to have a light panel inside the Dreambox. This will hold 16 white LEDs driven by a 16-pin I2C port expander, the four RGB LEDs and rows of 12V strip LEDs controlled by a mosfet transistor.

Connecting the light panel to the present circuit board would require 16 wires, just for the RGB LEDs. That’s a lot of wires to route around inside the case. Then I have to think about where to put the port expander chip and the mosfet.

The obvious solution is to build another circuit board that can attach to the back of the light panel. That will then connect to the main board via a single ribbon cable. I need to run only 7 wires:

That’s going to be a lot cleaner and tidier, and makes the light panel a discrete unit.

So, time to warm up the desoldering station and pull the breakout board from the current Teensy board.

For the record, I know that one day I’m going to have to be more careful about planning. Currently, my electronics projects are very simple and almost certainly sub-optimal. The truth is, my knowledge of electronics hasn’t yet progressed to the point where I’ll need to calculate and actually design circuits, rather than just throwing them together. For the moment, I’m just happy if no magic smoke comes out.