Topre switches are a divisive issue in the mechanical keyboard community. To some they are the apogee of keyboard switch development. To others they are rubber domes with hype.

Topre switches combine the slider mechanism of mechanical switches such as Cherry MX with a spring plus rubber dome capacitive actuator. So some people like to refer to them as ‘semi-mechanical’.

If you want to find out for yourself, there’s a high price of admission. Only a limited number of boards are built with them. Topre boards obviously use them, but they definitely tend towards the expensive end of the market. The Happy Hacker keyboard uses Topres. But that’s an overly compact board – worse even than many 60% keyboards – which rules it out for me. It’s also ludicrously expensive, especially given that you don’t get many keys for your money.

Attempts have been made to overcome this limitation. There was the Cooler Master Novatouch TKL board that had a lot of people raving – right up to the point where it went out of production. This combined Topre switches with new stems that could accept both Topre and MX keycaps. The keys also had a fairly light actuation force, at 45g. I searched high and low for one of these boards, until I realised it was no longer being made. Mind you, even when it was in production, it was very pricey.

I considered a Topre Realforce board – the 87U tenkeyless (TKL) model. But a couple of things put me off. Most of the ones I could find in stock had a relatively high actuation force – 55g. You can find some with lighter keys – 45g – but that lack of third-party keycaps kept deterring me, especially as the caps supplied with the boards were often so dismal (such as grey on black – how depressing).

The other issue I read about was the way the keys are actuated. I even saw messages specifically mentioning that they are bad for people with arthritis. All the resistance of the Topre switch is right at the top of the keystroke. Once you overcome that, the rubber dome collapses and the key (and your fingertip) plummets like Donald Trump’s popularity ratings until the final, and inevitably fatal, impact.

But still, I’ve pretty much explored what Cherry MX switches and their clones have to offer. I know what cheap rubber dome keyboards are like (not good) and I even have experience with Alps switches, thanks to my old and much-cherished Apple Extended Keyboard II. I figured I owed it to myself to check out this technology. 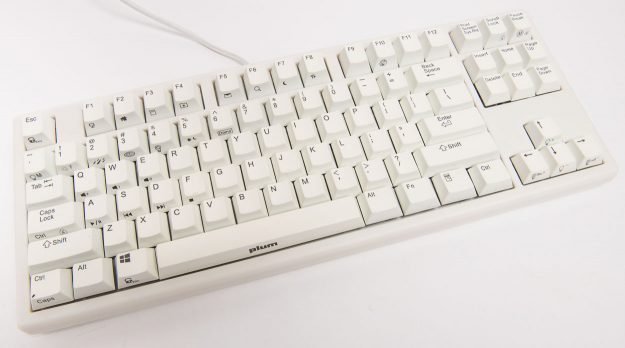 And then I discovered the Plum 87 with 35g switches.

Like the Novatouch, this has Topre-like capacitive switches combining spring and rubber dome but with a slider that will take both Topre and Cherry MX keycaps. Finding it in stock anywhere was a struggle. I eventually found a vendor on AliExpress. Apparently there’s a new version out that’s waterproof – presumably for people who dribble when they type – so stocks might get more plentiful soon.

This is my first RGB board: each switch is backed by an RGB LED (you can get the board cheaper without LEDs). The keyboard comes equipped with a number of lighting modes, so that the keys flash or fade in a variety of entrancing ways – all of which become tedious after about five minutes.

The board is equipped with PBT doubleshot keycaps. In case you don’t know what any of that means, I’ll just say that they’re very high quality. The surface of the keycaps is very smooth so that, combined with the softness of the 35g Topre-clone switches, the typing experience is best described as silky.

The caps are shine-through, to make the most of the RGB backlighting. Even so, I’m already tempted to replace them. And one of the reasons is connected with the biggest problem I have with this keyboard – its poor Mac OS X (macOS) compatibility.

To the left of the spacebar are the usual Ctrl, Windows and Alt modifier keys. I swapped the Alt and Windows keys around and made an adjustment in System Preferences on OS X and now those keys work as they should, with the Windows key standing in for Cmd. It’s not such a rosy picture to the right of the spacebar, though. There we have Alt, Fn, a special key showing a menu, and Ctrl.

On other TKL boards I use (notably the Code and the KÛL) you just swap around the Win and Alt keys, like I did on the left, with the ‘menu’ or ‘Fn’ key being used to access the board’s special functions, such as media controls. It doesn’t work that way with the Plum. Having made the change in System Preferences, the Alt key now works as Cmd, as I’d expect. But the ‘Fn’ key sits where I’d expect Alt to be, yet it still carries out the ‘Fn’ commands. This means I now have no Alt key on the right of the board. The Ctrl key works as expected, but the special ‘menu’ key seems to do nothing at all. So that’s annoying.

If you search online you can find a utility for programming the keyboard. Predictably, it’s a Windows utility and it won’t work via a Windows 10 VM running on a Mac – ask me how I know. I fired up my old Win7 laptop and had a go at remapping the FN key to ‘left alt’ and the menu key to Fn. I also tried a custom colour layout.

This did not go well.

The colours were fine, but when I tried using the remapped keys not only did the keys retain their old functions, the board would stop working after a while – the Mac would simply think there was no keyboard attached. I figured this was because it was attached to an unpowered USB hub. Connecting the board directly to the iMac seemed to do the trick. But when I rebooted the iMac later, the Plum’s backlighting refused to work (input from the keyboard was fine) until I did a full factory reset of the board. So there are a few issues.

I bought the white version of this keyboard because I’m sick of depressingly dark boards. The plastic case is textured and, although solid, looks a little cheap. Unusually, the USB cable is not detachable. It does, however, have a braided covering. That seems to matter to some people who do keyboard reviews – I have no idea why. The cable is long and thick and looks like it will stand up to a lot of wear & tear, if you’re the kind who regularly transports a keyboard between locations.

The Plum with my choice of colours. My wife thinks it looks like a gay parade. I’m fine with that.

Mac compatibility aside, what’s this keyboard like to use? I have to confess I like it, a lot.

For a long while, I used a board with Cherry MX blue switches – very clicky, very loud and with a highly distinct tactile feedback. I fitted O-rings to the keycaps – not so much to reduce noise (I work alone in my home office so there’s no-one here to annoy, more’s the pity) but to reduce the impact of bottoming-out each keystroke. That’s hard on my osteoarthritis.

Lately I’ve been using a board with Cherry MX brown switches, which have a similar weighting to the blues (at 45g to the blue’s 50g) and still have a tactile ‘bump’ without the very positive click. And I’ve been fairly happy with the browns (to which I’ve also added O-rings) now that I’ve learned to type lightly.

The Topre-like switches on the Plum are very different. The activation point – the moment at which the keystroke is actually registered – is close to the top of the stroke. That means you can tap very lightly without missing keystrokes. There’s still a tactile response, but because it’s right at the top, in many ways these keys are more akin to linear switches, in which there’s no feedback bump at all. It’s an odd hybrid approach, but it works.

The very light weighting (35g) of the switches, and the fact that the bump is encountered high up, means that I still do bottom-out a bit more often than I’d like. At first, I thought that the design of the key stems would rule out fitting O-rings to the keycaps. In fact, it works just fine.

I do have some sympathy with people who think Topre-style switches are just over-hyped rubber dome designs. But, in my experience, rubber dome keyboards tend to be cheap, rattly devices, built down to a price. To be sure of registering a keystroke you really have to mash down on the keys. If you have arthritic hands, that’s A Bad Thing.

The Plum keyboard is like a high-quality, high-precision rubber dome board on which you can type with confidence and ease. I find it a genuinely pleasant experience and one that’s easy on my fingers.

The one thing preventing me from saying this is my new go-to keyboard are the slight Mac incompatibility and those issues with programming the board. I have, of late, gone back to my Cherry MX Blue board (the WASD Code), but I find myself pining for the Plum from time to time. It’s nice to have options.