My doctor keeps telling me to stop typing. As a professional writer and enthusiastic coder that’s not going to happen any time soon.

But it’s true that, for me, typing is a pain – literally. I have osteoarthritis in all the joints of both hands (and many other places) so constantly hitting keys is not a joyful experience.

What I plan to do here is a quick roundup of a few of the things I’ve tried to make life more tolerable and allow me to work without undue pain. None of this is scientific – what you read here are just my subjective experiences. 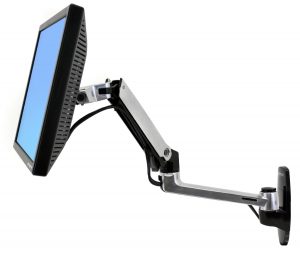 The arthritis is what drove me back to buying a desktop computer, after having used laptops for several years. With osteoarthritis in my neck, which leads to cervical vertigo, I can’t sit for hours at a desk in a normal office chair. Instead, I work in a recliner – albeit only slightly reclined – with my iMac on an adjustable arm – the Ergotron LX, which is as fine a piece of engineering as you’re likely to encounter.

The recliner chair and its footstool also vibrate, which is nice… sometimes a bit too nice… the cat loves it.

I’d tried doing something similar with a laptop – sitting in a lawn chair with the computer on a padded lap tray. The angles were never quite right, though. 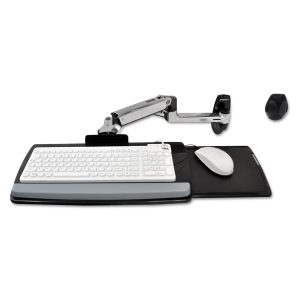 Once I’d hit on the idea of an iMac on an arm, this raised the issue of the keyboard and mouse. The first step was to put the keyboard on its own arm. Ergotron makes another arm, also in the LX range, which comes fitted with a keyboard tray and slide-out mouse support (it slides out of either side for both lefties and righties).

You might think that a keyboard on an arm might be a bit too bouncy – and you’d be right. But in my setup, the keyboard tray rests lightly on my lap, which stabilises everything nicely.

The one problem I did have was that the mouse was a little too far away for comfort. I kept wanting to move it off the bottom edge. So I bolted a stiff piece of plastic to the Ergtron to extend the mousing area towards me. It works beautifully. 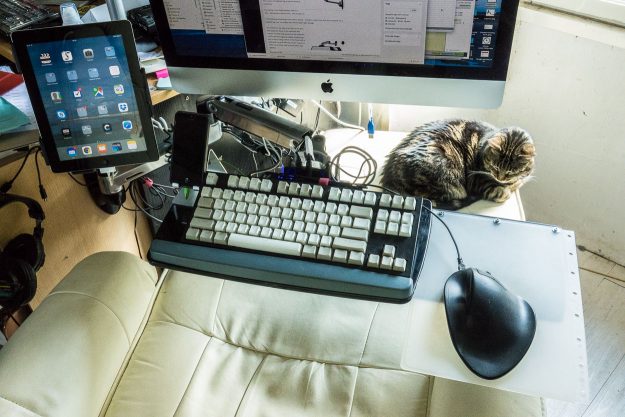 The keyboard and mouse on the Ergotron LX arm. The iPad is on a separate arm.

There’s also space on the keyboard support for a USB hub (no more reaching around the back of the iMac to plug in a USB stick) and a stand for my iPhone.

Laptop keyboards are rubbish. All of them. The best I’ve used in recent years is actually on a tatty 13in Lenovo that I still use for running the Tails operating system. (The computer is nastily cheap in every respect other than its keyboard.)

The problem is the degree of travel of the keys. While the keys on my MacBook Pro are fairly light to actuate – ie, they don’t require much force to press, which is a good thing – there’s only about a millimetre or so of movement before they ‘bottom out’, which is a bad thing.

Bottoming out is where the key reaches the end of its travel and comes to a sudden stop. The small shock of each key hitting the base of the keyboard may not seem like much to anyone with healthy hands. But when your joints are sensitive to any knocks or bumps, it can quickly become painful.

The iMac came with a Bluetooth keyboard that is a lovely bit of design but is essentially the same laptop keyboard but in its own case. 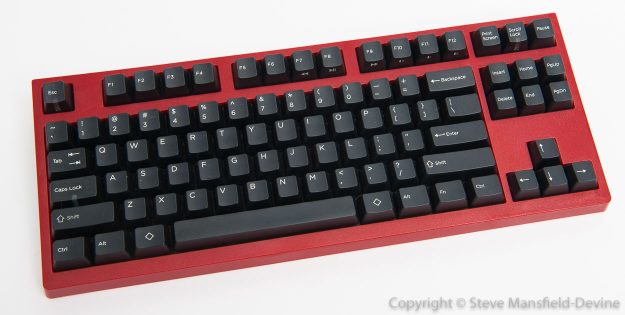 I’ll be writing more on the subject of key switches, but for now I’ll just say that I find it hard to make up my mind between the Cherry MX Blue, Cherry MX Brown and the Topre clones used in the Plum keyboard. My solution is to change keyboard every week or two. 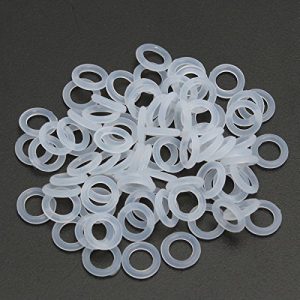 On all of them I’ve fitted O-rings to the keycaps, to soften the landing a little. O-rings use rubber of varying hardness, measured in ‘Shore’, with higher numbers being harder. There are also ‘A’ and ‘D’ ranges. O-rings for keycaps are usually in the A range and my current favourites have a hardness of 40A Shore.

The O-rings definitely make a difference when you bottom out. However, it’s best not to do that, so I’m trying to train myself to type lightly. My career as a journalist started with me hacking out long articles on old manual typewriters. And, never having learned to touch-type, my typing technique isn’t so much hunt-and-peck as search-and-destroy. So it’s taking a while for me to learn new habits.

The MacBook Pro’s touchpad is worse than the keyboard. I mean, it’s a fine example of its type, but tapping the hard surface in order to actuate mouse clicks (and worse, double-clicks) can quickly become agony for me. The same is true of swiping. I found myself longing for the old days of using a real mouse. That was a sign. So I bought a mouse.

The iMac came equipped with Apple’s Magic Mouse 2 which is, again, a beautiful object. There’s no scrollwheel – instead you just stroke the top of the device. In fact, you can set it up to obey all manner of gestures. It’s effectively a curved touchpad. It also has a beautifully light but positive click.

However, as much as I like the idea of stroking my mouse (and that has to be a euphemism for something), the curve of the Magic Mouse’s top surface is somehow too gentle. I find I hold my hand hovering rather uncomfortably above the mouse. It just didn’t work. 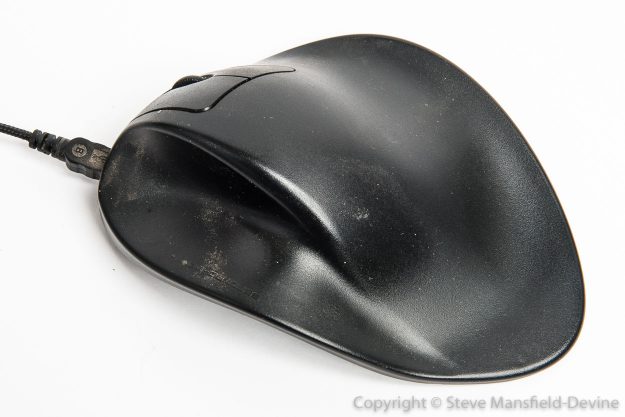 The Hippus HandShoe mouse, showing signs of wear after two years of continuous use but still working perfectly.

My solution was to buy the Hippus HandShoe Mouse, the result of a lot of research by Dutch academics. I’ve been using it successfully for a couple of years. It fully cradles the hand, meaning that you can relax the muscles. It’s designed to relieve issues with carpal tunnel syndrome and repetitive stress injury (RSI) but I find it’s very effective for arthritis pain too. 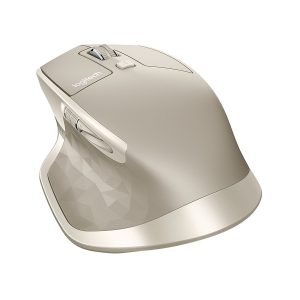 Just recently I also experimented with the Logitech MX Master mouse. Superficially, this has some similarities to the HandShoe mouse, such as giving you a place to rest your thumb. It’s also fairly large, which is good.

(I have a bunch of Genius Micro Traveler mice that I use with Raspberry Pi setups. They’re conveniently small, but painful to use for more than a short period.)

The Logitech is an excellent piece of kit and the extra buttons and rollers are easy to program, even on OS X. Being Bluetooth, it also does away with one one cable, which is never a bad thing. It doesn’t offer quite the same level of comfort as the HandShoe mouse, though, which is why I continue using the latter for daily use. Every now and then I’ll switch to the Logitech just to change things up.

All of these measures have enabled me to continue working, although none of them relieve the pain entirely and the best solution is still to not use the computer.

Oh, and before someone mentions it, yes I have tried using voice recognition systems. In fact, I’ve used them on and off since the 1990s. But they don’t match the way I work and are therefore of limited use. That said, as the arthritis worsens I think I may give them another try…

2 thoughts on “Computing with arthritis – keyboards, mice and more”