Recently I discovered a cache of articles I’d written for (mostly) computer magazines back in the late 1980s and early 1990s. I’m going to be sharing the more interesting ones here (the first is already online).

These pieces were written for a range of magazines, including Personal Computer World, Micro Decision, What PC? and something called PC Amstrad. Not only had the existence of that last one slipped from my memory, so had the fact that I wrote for it. There’s a couple of pieces I did for The Times and Business Traveller, too. It’s only a tiny fraction of my output from this period, and what I kept and what has disappeared seems entirely random. Among the surviving articles are reviews of software and computers that rapidly disappeared into obscurity, so why I bothered archiving these files is a mystery.

But there they are and, naturally, I was keen to read them and get them up in the blog.

Fortunately I already have the tools I need to do this, with one minor challenge. Or maybe two. 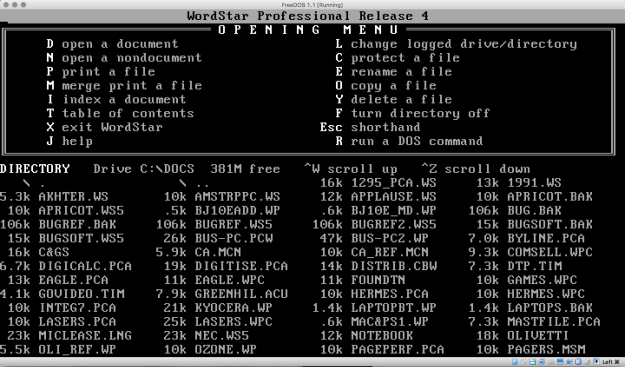 The opening screen of WordStar 4.

Being old, a geek and prone to nostalgia, I naturally have a couple of MS-DOS virtual machines running on my iMac. In VMWare I have an MS-DOS 6.22 VM that I found somewhere. I don’t use it much. In VirtualBox, however, I have a copy of the excellent FreeDOS, a DOS-compatible operating system with a bunch of useful extras, such as a TCP/IP stack,courtesy of mTCP, and an FTP server.

I used CyberDuck on the iMac to push the files to the FreeDOS VM. This took a bit of figuring out. The FTP server on FreeDOS kept disconnecting me. It wasn’t until I realised the ‘Connect Mode’ on CyberDuck needed to be set to ‘Active (PORT)’ that I got a reliable connection.

The majority of the files were in WordStar 4 format. I already had WS4 on the FreeDOS VM, so opening and reading the files wasn’t an issue. The thing is, I needed them in a more usable format.

Wordstar liked to mess around the high bit in characters which made it a pig to use its files in any other program. It had a ‘non-document’ mode for handling plain text files, but anything already created in the normal ‘document’ mode was trickier to handle.

I did a quick Google search to see what solutions others have found for exporting WS4 files. Boy, some people really like to make life hard for themselves. Many of the techniques involved writing Perl or Python scripts to convert the files byte-by-byte. I guess this is for those who don’t have a copy of WordStar to hand.

Because it turns out that not all of my brain has atrophied. Slowly it came back to me how you get a plain ASCII text file out of Wordstar. You print it!

From the main menu you select print, select your file, go through the pointless process of telling the program how many copies you want, whether you want it to pause for each page and so on, and then, finally, select ‘ASCII’ as your printer. This saves out a plain text file called ASCII.WS. 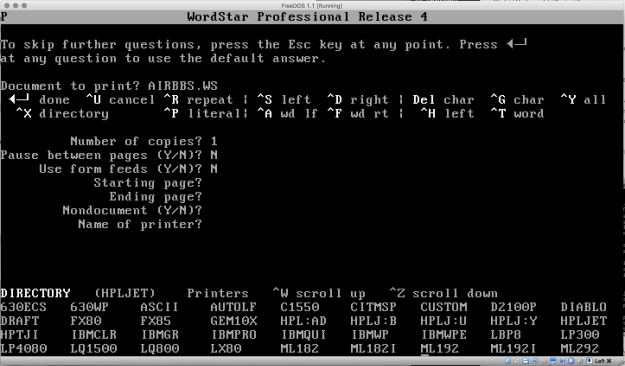 ‘Printing’ to an ASCII file in WordStar 4.

Then I ran the FTP server again, logged back in and pulled the ASCII.WS file on to the iMac. After a minute or two of editing in Word, it was ready. That was okay for the first one, but doing every file this way would be tedious, with all that dropping out of WordStar, firing up the FTP server and what-not. So after I saved out each file to ASCII.WS, I’d rename that export file to something more sensible and worry about downloading the converted files as a batch later.

Some of the files, it turned out, were created in WordStar 5. I’ll be writing more about this in a forthcoming post. Having downloaded a copy of WordStar 5.5, the process was similar to that above, except that the later version of the word processor allows you to specify the name of the output file. 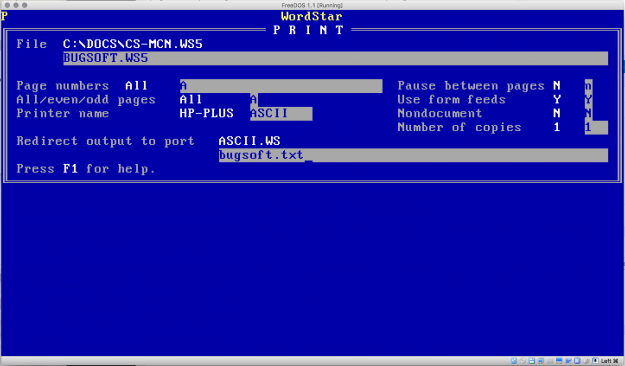 ‘Printing’ to an ASCII file in WordStar 5.

There were also a number of files in WordPerfect 5.1 format. Outputting ASCII text files is easier still in this program. With the file loaded, you hit Ctrl-F5 (Text In/Out), hit 1 to select ‘DOS Text’, another 1 to select ‘Save’ and then give the file a name. Easy. 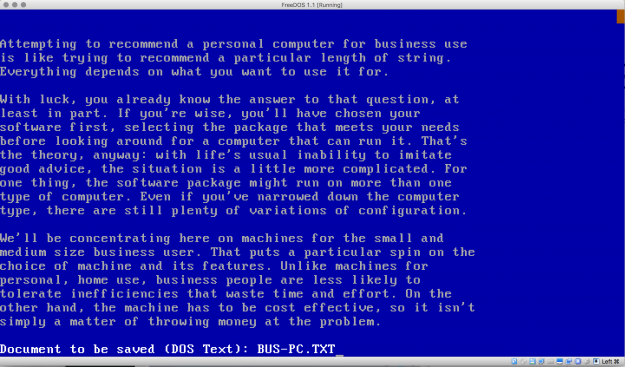 Saving a text file in WordPerfect 5.1.

In the process of doing all this, I was reminded of just how far we’ve come. Running the DOS screen at 100% scaling on my 5K iMac screen made for a rather small window. 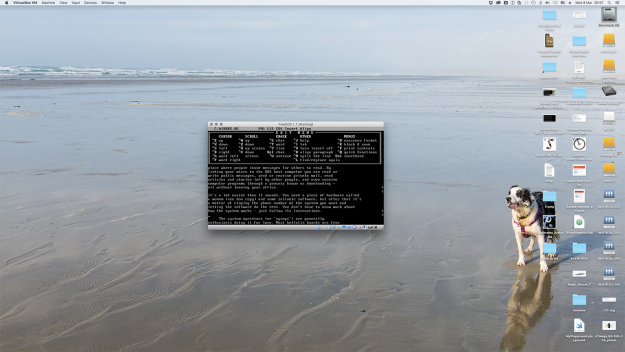 That used to be all the screen real estate we had. That confined window was my entire world for years.

As a writer and editor, I’m now accustomed to having multiple documents open at once – Scrivener, Word, a couple of PDFs and, of course, a browser and email client. Yet I do remember the exhilaration I felt when TSR (terminate and stay resident) programs first appeared, giving us the illusion of being able to run two programs at once!

Ah well, we were a simple folk then…