This was not a serious purchase. I bought this keyboard purely for its looks. I mean, why wouldn’t you? 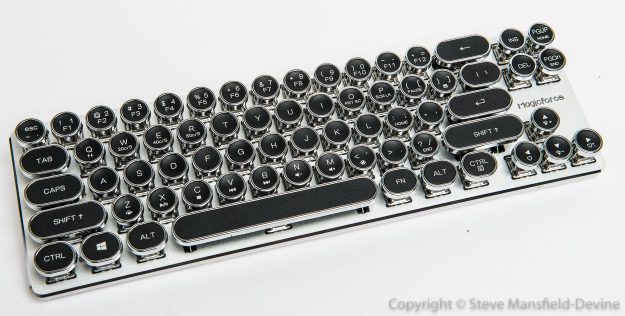 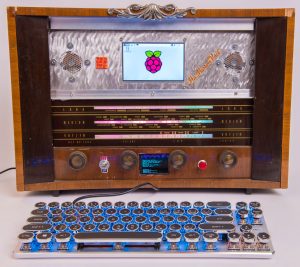 The version I opted for came with retro-style keycaps that mimic a 1920s or 1930s typewriter. They look fantastic with a retro-styled project such as my HMV1960 Raspberry Pi case.

Are they great for typing? Not so much. Because of the design, there is absolutely no profiling to the keys. With a lot of keycap designs you’ll find that if you look at the key surfaces from the side, the keys describe an arc, with the bottom row and top row sitting slightly higher than the middle rows. The keys are said to be contoured. This is why something like a number key, say, from one keyset can’t be used with a different keyset – because it will sit too high or low. How pronounced this arc is depends on the key design and different people have different preferences (and often strong opinions) about this. The Magicforce with the retro keys, however, is completely flat.

The keycaps are also a bit small, making it easy to mistype.

But if I ever get bored with them it’s no big deal to sling a bunch of conventional keycaps on this board. It uses standard Cherry MX switches.

The 68-key layout is something of a compromise between tenkeyless (TKL) compact boards and even more key-deprived 60% mechanical keyboards.

The function keys have gone, so you access F-key functions via FN and the number keys. I couldn’t live with that on my Mac, where I use F-keys a lot. But as a Linux keyboard it’s not so crucial, and Linux is what my Raspberry Pi is running..

Critically, unlike 60% keyboards, you don’t lose dedicated cursor keys. On Linux I’m constantly using the Up and Down arrow keys to scroll through my Bash history. Having to use FN with, say, the W, A, S and D keys, as I have to do on the 60% layout, is annoying. The Magicforce also keeps dedicated Page Up, Page Down, Insert and Delete keys. Personally, I don’t use Insert much, but Delete is something I always missed on my laptop keyboard. For Home and End you need to use the FN key. 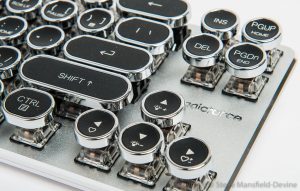 Note the ‘floating key’ design where the keys stand proud of the baseboard. Using FN with the arrow keys lets you control the backlighting.

The Magicforce is a floating key design, which means that the case does not come up around the keys at all. The keys stand tall and proud and, on this board with its round keycaps, seem like strange mushrooms. Or maybe I’ve been eating too many mushrooms.

This has two effects: one, the crap that falls into the keyboard has a good chance of falling out again, so you need to clean less often; and two, the crap that doesn’t fall out is far more visible, so you have to clean more often. How often you clean, then, is determined by your tolerance for visible hair, dust and whatever the hell that stuff is that builds up in keyboards.

The keyboard came with (mostly) blue LED backlighting, the brightness of which you can easily adjust. The W, A, S, D and cursor keys have orange LEDs so that gamers can find the keys most important to them without the aid of a guide.

With opaque keys like this, LED lighting is just a gimmick – it serves no useful function. In fact, the silver on the edges of the keys reflects the LEDs making for a somewhat dazzling and distracting effect. In the case of the W, A, S, D keys it’s especially confusing. Each LED tends to reflect off the keycaps in the row above, so the orange LEDs of the WASD cluster seem to be associated with the 2, 3, Q, W, E and R keys. Don’t buy this version of the keyboard if you’re a gamer with a WASD addiction.

Because of the floating key design, the light also spills out on to the desk surface, which is nice. But mostly I work with the LEDs off.

Backlit keyboards often offer a variety of LED modes, but the Magicforce has only the one – a so-called ‘heartbeat’ mode in which the LEDs pulse from fully off, fading up to maximum brightness and then fading down again, over and over and over (sometimes also called a ‘breathing’ mode). Who the hell uses this? It’s extremely annoying. You can change the pulse rate, but why would you? Seriously, if you’re so easily amused by shiny, flashy things, buy yourself a cheap set of christmas tree lights and forget about computers. You’ll be much happier. And while you’re at it, get off my lawn…

The keyboard is also available with conventional keycaps with shine-through legends, albeit with an horrendous choice of font. (With backlit keyboards, manufacturers often choose these weird, futuristic fonts, presumably because they think they appeal to gamers. Nearly every YouTube review I’ve seen castigates the manufacturer for such a lousy decision and recommends changing the keycaps.)

The switches I chose are Gateron browns. I was curious to see how they compared to Cherry MX browns. Now, you will find people online who claim they can easily tell the difference. Frankly, I think a lot of them are making it up. Yes, when I sit and obsessively and gently poke the keys on my switch tester (more of that in another post) I can tell the difference. The tactile feedback of the Cherry MX switches is slightly crisper than that of the Gaterons. If you held a gun to my head and forced me to make a choice, I’d go for the Cherries. But in the heat of typing, say, a quick blog post about keyboards, I think I’d be hard-pushed to really know the difference.

The overall build quality of the Magicforce keyboard is good. The top surface of the board is aluminium, so although it’s slim the keyboard is very rigid. There are two fold-out feet on the bottom. Given the flat profile of the keys, you’re probably going to want to use these even if you normally prefer your keyboard to lie flat.

The USB cable is detachable (which matters to people who like to carry around their keyboards for reasons even they probably can’t explain) and connects via a micro-USB port on the underside.

The 68-key design and the fact that the board barely extends beyond the keys mean that this is a very compact board without sacrificing too much in the way of convenience. If I’d bought it with conventional keycaps (which I may fit one day) I’d probably be using this as my main Linux keyboard. With these gimmicky-yet-appealing typewriter keycaps, though, the Magicforce gets only occasional use. But it brightens up the office.