There seems to be an obsession with many mechanical keyboard enthusiasts to make the keyboard as small as possible. I can go along with this only so far. 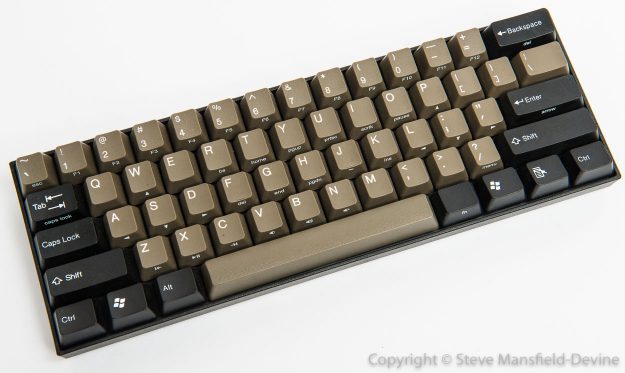 As you can see here and here, I’m already a fan of the tenkeyless (TKL) form factor, which dispenses with the number pad but keeps everything else.

The KB Paradise V60 takes things further. This is a 60% keyboard, so as well as dumping the number pad it has also deep-sixed such fripperies as arrow keys, the normal Insert, Delete, Home, End, Page Up and Page Down cluster and function keys. (The Print Screen, Scroll Lock and Pause keys are also gone, but who cares?) Even Escape has escaped.

That’s not to say the functions these keys normally provide aren’t available – they are. Welcome to the concept of layers.

Actually, most people are already familiar with this idea. If you use a laptop, it’s highly likely that some keys do double duty. It’s common, for example, to have function keys also provide media control (play/pause, mute, volume etc) via the use of an FN key. On my MacBook Pro, forward delete (ie, Delete) is achieved using FN + Backspace. I got used to that, but I never got to like it. 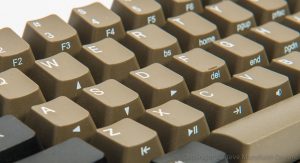 Many functions, including the cursor keys, are accessed via an additional ‘layer’ – using the FN key plus alpha keys

And so it is with 60% boards. On this KB Paradise board, to move the cursor around you use FN with the W, A, S and D keys – which is something of a convention, especially in gaming. Alternatively, you can use FN with P, L, semi-colon and comma. Media control is via FN plus the Z to N keys. And F-keys map to the number keys, so F1 is FN + 1. Even the Delete and other keys from that cluster are available on this extra layer. Escape is via FN plus the backtick/tilde key.

Some of this is configurable via DIP switches on the underside of the keyboard. For example, if you don’t use the backtick or tilde characters much (ie, you’re not a programmer or *nix admin), you can flip a switch and get that key to work as Escape by default, with the backtick and tilde still available via the FN key. You can also reconfigure the arrangement of the left Tab, Caps Lock, Shift, Ctrl, Alt and Win keys – there’s about six variations to choose from. And there are four arrangements for the right Alt, Ctrl, Win and FN keys.

All of this makes for a very compact board. KB Paradise has emphasised this through a case that adds almost no extra width or height.

I ordered the board with Cherry MX brown switches. In fact, the pleasant sensation of typing on this keyboard is what persuaded me to order brown switches for the KÛL ES-87 TKL keyboard I bought recently. The keycaps are in the Dolch colourway, which I think gives it a very 1980s business PC look.

So why did I buy the KÛL when I already had a keyboard with MX brown switches?

Well, for me the 60% layout is a step too far in compactness.

I got into mechanical boards because I was seeking comfort. Constantly having to use the FN key, especially for moving the cursor around, just adds to the number of keypresses I need to do and often results in uncomfortable contortions of the hand. I’m sure you’d get used to it if you use this as your main keyboard, but I don’t.

I can’t fault the board itself. It’s superbly well built. And there is only one additional layer: I’ve seen boards that use multiple layers accessed via various combinations of FN, Ctrl, Alt etc. That would drive me mad, frankly.

The compact size means there’s no cable channel to keep things tidy – the mini-USB cable connects directly on the back of the board, near the left-hand end. But at least it’s detachable.

For such a small keyboard it’s quite heavy, which is a good thing as it stops it moving about when you type. There are no flip-out feet on the underside, though, so you either lay it flat or need to find something to prop it up at the back. The top of the board is already angled a little and the profile of the keys means I find it’s actually pretty comfortable without any additional angling.

The ABS doubleshot keycaps that came with it are high quality with a pleasant texture. My one grumble about them is that they include Windows keys. I prefer KÛL’s approach in which they have an OS-agnostic design for this key.

Although it’s not destined to become my go-to keyboard, it’s still useful. I have a whole bunch of Raspberry Pi projects I have on the go. The V60 and a mouse remain plugged into the USB ports of my Dell monitor which in turn connects via a single USB cable to whichever Raspberry Pi I’m working on at the moment. The small size of the V60 means it’s easily stowed out of the way when it’s not in use.

If you’re happy with the concept of layers and are looking for something that takes up the minimum desk space and eschews gimmicks (like RGB backlighting) for simple quality, then I’d have no hesitation in recommending the KB Paradise V60.

[UPDATE 01/09/2019] I keep putting this keyboard aside and picking it up again. While I like its space-saving nature, constantly having to access certain functions (especially the cursor keys) via extra layers plays havoc with my arthritis-riddled hands.

It’s back in use for the moment. I’ve set up my LattePanda Alpha as an electronics test bench machine, along with a 12in display and Bluetooth mouse. The whole point of this rig is that it’s small but more flexible – in terms of where I place things – than a laptop. So this keyboard is a good match on that basis. But I’m using it only because I don’t do much typing on this machine. If I did, this 60% board would soon have my fingers screaming for mercy…