The Das Keyboard 4C impressed the hell out of me when I first got it. But over time, as I’ve become more familiar with mechanical keyboards and what they’re capable of, disillusionment has set in. 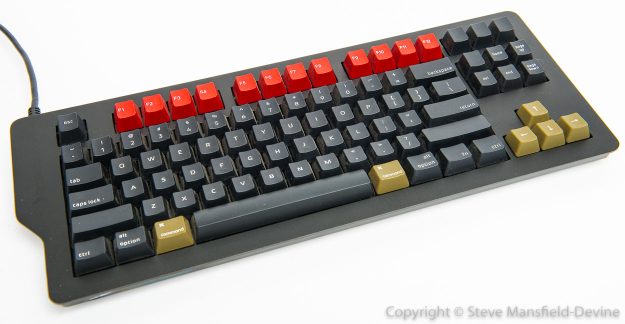 This is not how the keyboard comes – I have messed around with the keycaps a little.

Having decided to explore the idea of using a mechanical keyboard I started trawling the interwebz, as one does, and the name of Das Keyboard kept cropping up as a quality brand. I initially invested in a Das Keyboard 4 Professional for the Mac. This has some excellent features, including dedicated media keys and a large volume control knob. But it’s a full-size board and I was quickly becoming aware that my requirement was for something more compact.

I eventually went for the Code keyboard as my daily driver, but I was also drawn back to the Das, for some reason. So I bought the compact version, the 4C Professional, which is a tenkeyless (TKL) design. This isn’t specifically for the Mac, but swapping the Alt and Win keycaps and a quick trip to macOS’s system preferences soon sorted that.

One bonus is the presence of two USB ports, making it easy to plug in a mouse and some other peripheral such as a memory stick. Annoyingly, though, both ports are on the left-hand side. As a right-handed person, this means I need to run the mouse cable all the way around the keyboard. It would have made so much more sense to put one USB port on each side (I’ve seen this done elsewhere).

The keyboard’s USB cable is captive, which makes carrying or storing it less convenient. It’s sturdily attached, though, so a broken cable is an unlikely event. 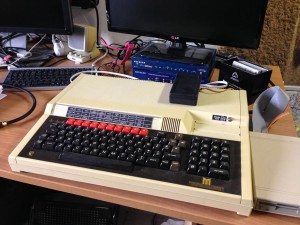 I’m not going to give you the full story of the keycaps in the picture above, but it’s important to note that the image does not represent the keyboard I received. I made the mistake of ordering the 4C Ultimate, which has blank keycaps. All the black keys that have legends that you see in the picture have been salvaged from my earlier Das Keyboard. The red and olive-coloured keys are those I’ve added to vaguely mimic the keyboard from my beloved BBC Master (late of this parish).

I don’t much care for the Das keycaps, frankly. The font is small and weedy and just looks cheap. Das says the keys have a UV coating, but I’m not convinced they will stand up to a lot of wear and tear. 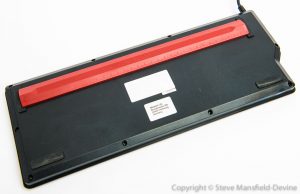 There are no fold-out feet on the underside. Instead, Das provides a magnetically attached red plastic ruler. The company doesn’t say why it made it a ruler; instead it just claims “you’ll thank us later”. Well, I’ve had Das Keyboard products for a couple of years now and I’m still waiting for a reason to thank them. Having a ruler clamped to the underside of your keyboard is not convenient and it does little to raise the board into a comfortable typing position. And because there’s no rubber on the ruler, the keyboard can have a tendency to slide. In my opinion, this is a gimmick that hasn’t worked.

On the other hand, the general build quality of this product is excellent. The top surface of the keyboard is anodised aluminium and the whole thing feels bullet-proof. The compactness of the TKL layout is very slightly undermined by a wide area of top plate running around the board. It space is tight, this might not be the board for you.

But finally to the aspect of this board that I feel lets it down most – the switches. Like most board makers, Das gives you a choice of switches – blue or brown in this case. But these are Greetech switches. These are clones of Cherry MX switches. Clones are common these days, and some of them have won enviable reputations. Many mechanical keyboard enthusiasts are loyal fans of Gateron or Kailh switches.

On its web site, Das Keyboard makes a very big deal about its choice of Greetech switches. But it’s almost a case of protesting too much. I feel the firm is trying to make a virtue out of a failing. I’ve seen the opinion voiced ore than once that Das chose Greetech as a cost-saving move. And I can believe it.

There’s something about these switches that just doesn’t feel right. I chose the Greetech browns and they down have the same tactility as the Cherry MX browns that I’m typing on right now (on the KÛL ES-87). The Greetech’s feel almost linear. It’s a subtle thing, and I’m sure many people would be happy with the Greetech’s, but they weren’t what I was seeking.

I’ll have more to say about switches in a forthcoming post.

To round up, the Das Keyboard 4C Professional is an extremely well-made keyboard. I’m glad to have it and will continue using it. But I feel it’s let down by a few design decisions – the silly ruler idea, the placing of the USB ports, the over-large top plate, the keycap printing and, above all, the choice of Greetech switches.