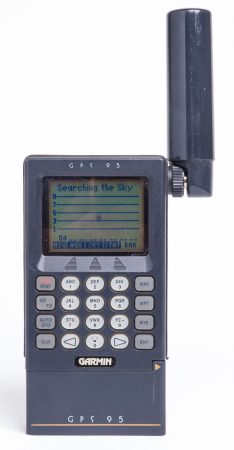 GPS seems an almost mundane technology these days. It’s in your smartphone and possibly your camera. You can buy cheap GPS receivers to work with your Arduino or Raspberry Pi so that robot you never seem to have time to build never gets lost (or is that just me?).

But yes, I am old enough to remember when the Global Positioning System seemed almost miraculous.

I got my pilot’s licence in 1990 and for the next three years my safety would be entirely dependent on maps (or charts as we prefer to call them in the aviation world because that sounds more expensive). GPS units were confined to very big or very luxurious aircraft and were always panel-mounted. But then handheld units started to appear and, if you cared very little about your financial security, they were finally within the grasp of individual hobby pilots like me.

I bought this Garmin GPS 95 when it first came out, in 1993. That makes it 24 years old, which puts it firmly in the ‘vintage technology’ category as far as I’m concerned.

I can’t remember how much it cost, but I do recall sitting in the office of the avionics specialists at Stapleford airfield and breaking into a cold sweat when they called my credit card company to approve the sale (yep, all done with phone calls then). A magazine clipping I found online suggests it sold for around $1,600. That would equate to £1,000, which sounds about right.

It was a marvel. There was a built-in database of the locations of all UK airfields and navigation beacons. I think there may have been some data about airspace classification, too, but I’m not sure. And you could program in and store routes with multiple waypoints. In terms of graphics, think late 1970s 2D wireframe. If you’re imagining something with maps, think again – those wouldn’t arrive for some time after this device. It was crude, but it was accurate.

As well as in the air, I’d use the Garmin whenever we drove long distances, such as down to Cornwall for Christmas. There’s no data about ground features in the machine’s database, and entering lat/long coordinates could be tedious, so our waypoints – which gave us our distances to travel and ETAs – were airfields that lay abeam various points on our route.

The lack of detail, including the total absence of ground detail other than locations of airfields, meant that I never fully trusted it as my primary means of knowing where I was and where I was going – something we pilots like to call ‘navigation’ in our more pompous moments. This was a good thing. As these devices started to become popular, the UK Civil Aviation Authority (CAA, or Campaign Against Aviation as it is popularly known) felt impelled to issue stern warnings about using GPS only as an aide to navigation. You should, they said, still carefully plan your routes on a chart, draw up a route plan, get your weather forecasts and do all the traditional stuff of calculating crosswinds, heading, leg times, fuel burns and so on.

Actually, I liked doing that stuff. And combined with the paucity of information provided by the GPS, the CAA’s warnings seemed to me like stating the obvious. Yet I did meet pilots who had ditched their charts (or failed to update them each year) and simply plugged their routes into a GPS and took off.

The problem with a GPS is that if you get something wrong, such as entering an inaccurate set of coordinates, it will take you efficiently, unerringly and with great precision to the wrong place.

It wasn’t a huge surprise, then, that when GPS units became common in cars we started seeing stories about people following them slavishly into dangerous or damaging situations – turning into rivers or the wrong way down one-day streets, that sort of thing. There is a word for this sort of person, one inherited from those map-free pilots who went before them – idiots.

A classic example of the kind of trouble you can get into was provided by a friend of a neighbour a couple of years ago. She arrived at Caen and entered the name of our friend’s house into her car’s GPS. She didn’t suspect anything was wrong for a long time. A very long time. I mean, this journey was taking hours. It turned out she’d entered the right name – but it was the name of a town way to the south of us that just happened to be the same as our neighbour’s house. Actually, it’s not an uncommon name. She’d overshot by about 150km.

That’s the problem when you use technology without engaging your brain. You should never fully trust the output of any machine.

In a car, it can be embarrassing, or damp (if you do the river thing). In an aircraft, it can be very, very dangerous. On one occasion I made a mistake with the GPS which, if I hadn’t been repeatedly cross-checking my position on the chart on my lap would have led me into Heathrow’s Class A airspace. If you’re flying a Cessna and get into an argument with a Boeing you’re generally going to lose. 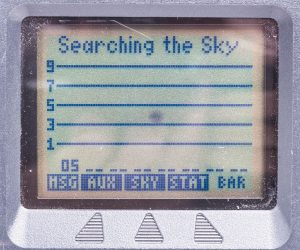 For old times’ sake I stuck four AA batteries into the Garmin and fired it up. To my surprise it booted, albeit with a warning that the built-in database expired in 1994. I can’t remember how you upgraded the database on these things – there was no such thing as USB or SD cards in those days. As far as I can see, there’s no removable media at all. I suspect an upgrade was a ‘return to dealer’ affair. There was also a warning that stored data had been lost (possibly an update and almost certainly my list of favourite routes).

I also have a rechargeable battery pack for it, but I’m assuming the NiCad cells are long past their prime. I do remember that this thing chewed through AA batteries like nobody’s business. A set of four would last about 90 minutes. I always flew with the NiCad fully charged and two spare packs of AA alkalines.

There’s a slight dark spot in the middle of the screen, but otherwise it worked fine. I left the device sitting on a windowsill and came back an hour or so later to see how many satellites it had acquired. The answer was … none. Oh well, it’s been a long time since I’ve flown and I wasn’t planning on going anywhere with it.