This piece was written for Which PC? when the Amstrad PPC first came out in 1988. I can still recall to this day how the Amstrad creaked and groaned. This was probably the cheapest-feeling computer I’ve ever encountered.

And as for powering it from 10 C-size batteries – holy crap. Given the lousy battery life – you’d have to carry around at least one spare set – that seriously affected the machine’s portability, not to mention cost of ownership.

It was really meant as a transportable, of course. Note the endearing way we still referred to these computers as ‘micros’ back then.

This has to be the strangest portable computer I’ve ever used. It’s unconventional to the point of perversity, yet the impression is of a carefully considered design. And the oddest thing about it is that it caries the Amstrad name. 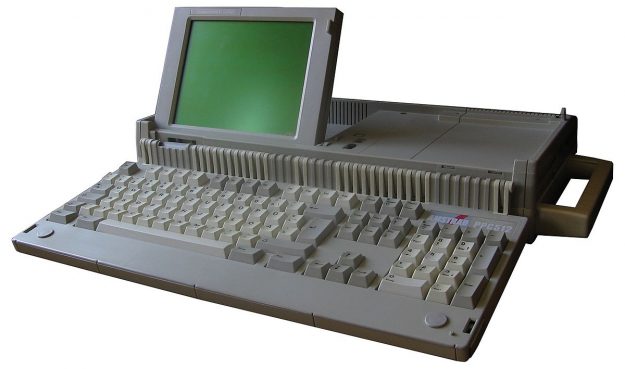 Well look at that – a ‘laptop’ with a full-size keyboard. This is the 512K version of the machine.

As far as design is concerned, Alan Sugar’s machines aren’t noted for their pioneering approach. Amstrad is better known for successfully packaging and pricing old technology, the eight- bit CP/M-based PCW and the PC clone being cases in point.

Not long after Amstrad got into the PC market, rumours appeared concerning a laptop machine. Now, with the PPC range, the rumours have been confirmed, although you’re going to need a pretty large lap.

There are two main machines in the range, the PPC 512 and the PPC 640. The numbers refer to their memory – 512k and 640k respectively. But the more significant difference is that the 640 comes equipped with an internal modem. The machine supplied for review was the 640, but all the comments, apart from those relating to the modem, apply equally to the 512.

I suppose this machine really isn’t meant as a laptop, but as a compact transportable. All the same, people will still try to use it on trains and planes – well, good luck to them.

At first sight, the PPC takes some working out. Most laptops are square – like the Zenith and Toshiba micros – or slim, A4-size slabs looking for all the world like overgrown calculators. Amstrad’s micro is nothing like that.

To start with, it’s a very elongated oblong, with a fixed handle on one of the short sides, next to a couple of 3.5 inch disk drives. As you carry it, the depth is around 18 inches, which might be a problem for anyone with short legs. If you find that size difficult to imagine, think of the size of a standard AT keyboard – because that’s exactly what you find when you unfold one of the long sides.

The side contains the keyboard, attached to the main unit by a massive hinge running the length of the machine. On the machine itself, underneath where the keyboard was, is a small square LCD panel, which itself hinges upward to give the best possible reading angle.

A panel running the whole length of the back unfolds to reveal the machine’s interfaces. These are: video; parallel printer port; serial port; two expansion sockets; DC in, for connecting the mains adapter; monitor DC in – of which more later; and, on the PPC640 I had, a BT socket to plug in a telephone.

On the top plate, next to the screen, are two thumbwheels, for volume and screen contrast, a switch for selecting external or internal power source and a set of LEDs. Two of these are busy lights for the disk drives, which saves you having to crane your neck round the side of the machine to get confirmation of disk activity.

Behind this lot is a cover. Prising it open reveals, on the PPC 640, a standard telephone lead ending in a BT jack plug. It doesn’t take a genius to work out this is for the internal modem. Considering the low price of the machine, the modem is highly impressive. It has all the features you expect these days, plus a bit more. It’s Hayes compatible, with auto-dialling and auto-answer. And it’s a V21, V22(bis) and V23 device, meaning that it operates at all the useful speeds – 300, 1200/75, 1200 and 2400 baud full duplex. The last two are particularly important. For those of you not conversant with modem jargon, this model is fast. Indeed, modems this fast have only recently become common for normal dialup communications, and are still generally quite expensive.

The keyboard is quite good, although some people will dislike the lack of response – it’s very soft and ‘plastic’. The pitch and angle of the keyboard are also good, and I got up to high typing speeds even with my usual two-fingered style. (I might have done better if I’d used both hands). Having a conventional keyboard is certainly a help – there’s no doubling up on key assignments, and everything’s where you expect it to be.

Four power sources can be used. A mains adapter is supplied and is the logical option for use around the house or office. However, unlike most laptops, the Amstrad does not use internal, rechargeable NiCad cells for power on the move. Instead, you plug in ten C size batteries – Amstrad insists on alkaline cells. An alarm warns you when the power gets low, but in any case the manual suggests using external power sources whenever possible, and keeping disk activity to a minimum while on batteries.

The micro also comes with a lead for plugging into a car cigar lighter, although you’re told not to use the modem at the same time. Finally, if you already have an Amstrad PC, you can use the monitor as a power source – this is what the ‘Monitor DC’ socket is for.

Portable machines have a habit of being slow, and this one is no exception. I suspect the LCD panel is the limiting factor as far as processing is concerned, but the disks are nothing to write home about either. That’s not to say it’s bad – just average.

The general design and construction doesn’t do the machine any favours. The all-plastic case looks like some kind of hi-tech vacuum flask. It feels weak – more like a toy than an expensive business computer. But I had no reason to doubt the machine’s resilience or reliability during the time I had it – these are just first impressions.

Without doubt, the machine’s weakest point is the display. There’s no real problem with the size – it’s only slightly smaller than the displays on machines such as Zenith’s laptops. And the shape of the screen is the same as a conventional monitor, so there’s no distortion. It’s just that you can’t read the damn thing half the time.

Amstrad has used a supertwist LCD, which gives it a head start over older laptops. That makes the character definition good, and in reasonably bright light the screen is quite good. But once the light level goes down, so does the definition.

I found myself using the micro most often at night, in normal room lighting and found that I had to either place the machine where there was a lot of light falling on to the display – with all the consequent problems of glaring highlights – or move it out of the glare and have to squint to read the characters.

All of this could have been avoided if the display had been backlit. This would shorten the battery life and put up the cost, of course, but I think I’d suffer that in order to have a readable display. Given the machine’s size and propensity for falling off one’s knees, it’s unlikely to be used a great deal on trains and planes.

What I want out of a micro like this is the ability to use it at home or the office, in the hotel or the living room – in other words, places where I could plug it into the mains. Indeed, in the time I had the micro, I didn’t use the batteries once, so short battery life would not be a problem. Cost is something else. At #599, the machine is good value, which it might not be at another #100. Oh well, I suppose you can’t have everything. You can always plug the machine into a monochrome or colour monitor – the display is CGA compatible. The default selection of LCD or monitor can be made by setting dip switches on the side of the machine, and you can switch between the displays from the keyboard at any time. A light comes on when the monitor is selected.

The expansion slots on the back are an interesting little extra. They open many possibilities, as they connect directly with the main bus. The first application will probably be an external unit for add-on cards.

Fortunately, at least in the opinion of this reviewer, the machine does not come encumbered with GEM, as does its desktop predecessors. This is hardly surprising. It’s hard enough to keep this machine on your lap without wondering what to do with a mouse! However, that doesn’t mean it’s devoid of software.

The DOS supplied is version 3.3 and has a few extras to take care of the machine’s special features. And there’s a suite of ‘desktop’ utilities known as the Organiser. You get a word processor, a diary (complete with alarms), address book and database, calculator and general utilities. It’s all fairly straightforward and useful stuff, and can be run either as a normal program or in pop-up mode, when you can access it from other programs.

The manual testifies to the fact that the Organiser software was a last minute addition. It’s separate to the main manual, is printed in mono and has the appearance of a rush job.

However, you won’t spend much time reading it as the software is largely self-explanatory.

The modem-equipped machines also come with Mirror II, a deservedly successful communications package, capable of handling both scrolling a viewdata formats, and which takes full advantage of the modem’s Hayes compatibility. It’s one of the best comms packages around for PCs – Amstrad has made a good choice. .pa

This really is a strange machine. I found myself liking it for its compactness. But for its display I would have little hesitation is recommending it as a micro worth considering if you don’t like being tied down to working in one place. Alas, a good screen is important to me, and the Amstrad’s poor display would stop me buying it.