At the risk of making this sound like another “kids today don’t know how lucky they are” post, let’s talk about disk swapping.

If you don’t know what that is, you’re lucky. It would be depressing to even attempt to calculate how many hours of my life I’ve spent sitting in front of a computer feeding floppy disks into and taking them out of a disk drive.

These days we just download our software. Even if it comes on some sort of medium, it’s likely to be a capacious DVD. Everything comes on the one piece of storage. I was astonished when I bought Windows 10 and it arrived on a very small USB stick. How convenient.

But my computer coming-of-age was back in a time of Big Box Software. At first it wasn’t so bad. Most of the box was taken up with a ring-bound manual and the software would be on a single, easily backed-up 5.25in floppy. 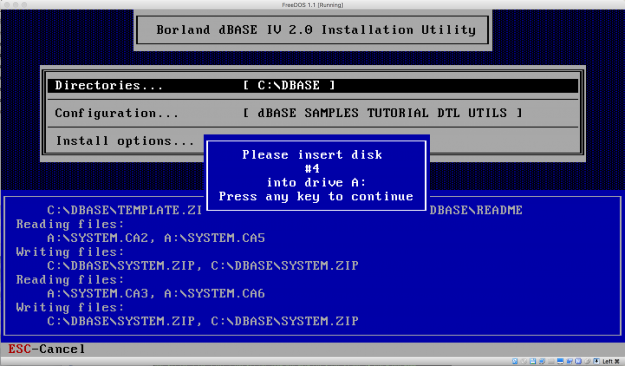 Installing dBase IV on a VM.

Then it was two disks. Then three. Pretty soon it was out of control. I think my personal nadir was when I reviewed WordStar 2000 which arrived on 20 5.25in floppies. I know there were worse offenders, though.

If you were lucky, the installation routine would want all the disks in numerical order. If you were unlucky, right after installing from disk 5 it would ask for disk 3 again. Then disk 1. Then disk 6 which, by this time, had slipped off your desk onto a pile of other disks on the floor.

Or it would ask for the ‘Printers’ disk and you’d shuffle and shuffle the floppies, impatience and anger growing as well as a cold, nagging fear that the disk was missing and the installation would fail leaving borked software on your hard drive. That happened to me more than once. Then you’d see a floppy labelled ‘Utilities and printers’ and heave a sigh of relief. Until, that is, you found that the disk was corrupt.

Virtualisation has made all this so much easier.

Just lately I’ve been installing vintage software, mostly sourced from WinWorld, although Vetusware has turned up a few gems too, on to my FreeDOS VM running under VirtualBox. And it’s actually been fun.

The disks come as image files. ‘Inserting’ a floppy involves nothing more than a couple of clicks. And the software installs almost instantly – no more whirr-tuck-tuck-tuck-tuck-chugga-chugga (though I kinda miss it. Luckily, the fabulous Virtual ][, which simulates an Apple ][, includes great sound effects for when I need a fix).

Of course, for the ultimate disk-swapping experience you need to try copying software or data files with a single-floppy machine (ie, no hard drive). Apple’s original Macintosh introduced the world to that particular horror, not least because it was further hobbled with limited memory.

So it’s true, the kids today … no, let’s not go there. Let’s just offer up a small prayer of thanks to the imaginary friend of your choice for the miracles that are the Internet, hard drives and virtual machines. Hallelujah.