Yeah, I know what you’re thinking … he really should get on with building the damn computer. But I have a thing about fonts, so sue me.

I was rather pleased with the original Zolatron 64 logo. I chose a font called Eurostyle because it was the most 1970s-looking one on my machine. Then I read about the history of the Commodore Pet. This post really joined a few dots for me. I was never sure whether the aesthetic of sci-fi movies of the 60s/70s were inspired by the technology of the time or the other way around. It seems it worked both ways. 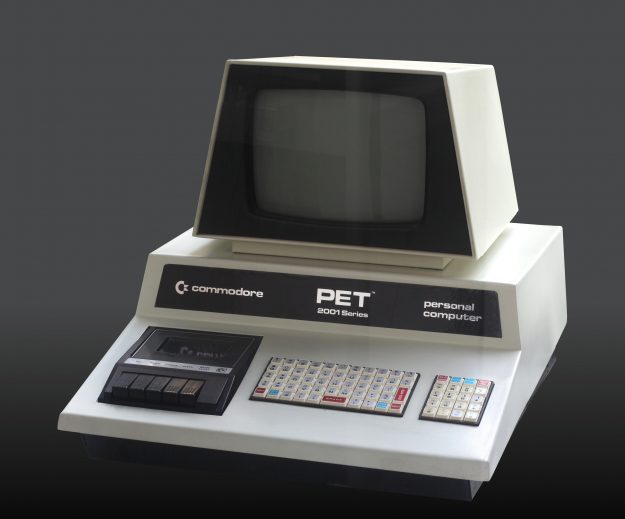 Jack Tramiel and Chuck Peddle of Commodore were, it’s claimed, hugely influenced by the movie 2001: A Space Odyssey when they produced the Pet. And you can see it, right down to the legend ‘2001 Series’ on the machine, which otherwise is entirely meaningless.

The typeface used for the main PET logo (and probably the rest of the type on that front panel) is Microgramma, created by by Alessandro Butti and Aldo Novarese in 1952. It is, according to the Inexhibit post, the same font used for the infamous HAL 9000 computer in 2001.

The PET has long been an object of desire for me, just because it looks so futuristic. Most technologies that have attempted to appear as though they belong in a future epoch instead have become rapidly dated. Just check out cassette tape machines or other hi-fi gear of the 1970s and you can see how it is now condemned to be part of a bygone age of big hair, bushy moustaches and embarrassingly tight trousers.

The PET, on the other hand, still belongs to the future – in spite of having a cassette drive built in. We have yet to reach the era it evokes. Perhaps we are not worthy of it.

The PET was based on the same MOS 6502 microprocessor I’m using for the Zolatron (more or less – the chip’s been updated a bit). The name, by the way, is supposed to be derived from ‘Personal Electronic Transactor’. That’s clearly a backronym to me. Obviously the Commodore boys just wanted a three-letter, pronounceable name – you know, like ‘HAL’ but a bit cuter. Something you’d actually want around the house like a, um, well, a pet.

So I was inspired to find a free version of the Microgramma typeface and rework the Zolatron logo, just to add one more layer of retro authenticity to the project. And what do you know? It looks almost identical to the original. Digging a little deeper, I found that Butti and Novarese revisited and slightly updated the Microgramma font 10 years after creating the original. The result was … Eurostile!

Oh well, at least my instincts were good. Here’s the ‘new’ version: