I remember well the first time our family got a computing device. Dad brought it home in his jacket pocket.

This was probably 1971 or 72. It was a slide rule made, I think, by Faber Castell. Dad was a work study (time and motion) manager at a pharmaceutical firm. He used the slide rule, I suppose, for working out how fast the worker drones scuttled about the factory floor.

I made him teach me how to use it and then spent many happy hours calculating random sums. I even took it to school to use in maths. It was, to me, a miraculous device. In fact, I’m not sure I gave it back, although it’s disappeared sometime along the way.

Fast-forward about 15 years or so and I found myself using a slide rule again – this time for flying. 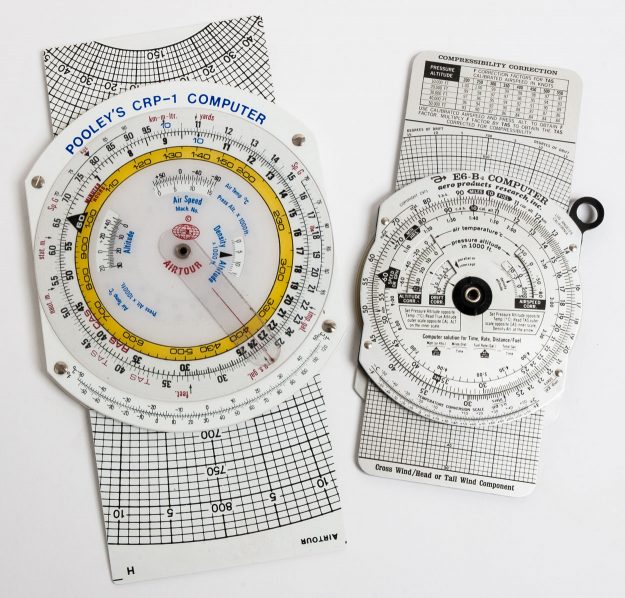 On the right is an aluminium version of the famous E6-B flight computer. On the left is the British version, Pooley’s unfortunately acronymed CRP-1. In 1990, when I learned to fly, every student pilot had to know how to use these devices. You used them for time/distance/speed calculations (eg, how long it will take me to complete this leg of my journey at this ground speed). You can work out the weight of fuel you’re carrying; true (as opposed to indicated) air speed; density altitude and lots of other useful stuff.

The rear side is more specialised. There’s a rotatable plastic window over a grid. You use this to calculate the head/tail-wind and crosswind components of the wind you’ll encounter on your route and work out your resulting ground speed. It’s essentially a clever way of doing vector diagrams. 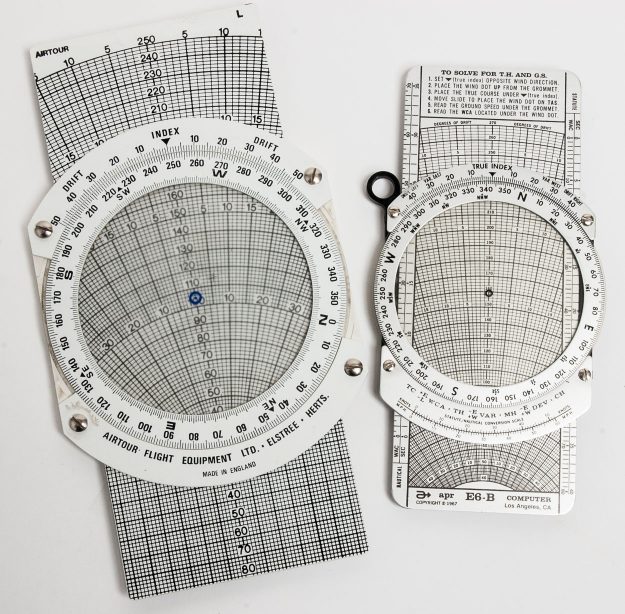 So these devices are quite specialised. But many of the core functions are provided by what is really nothing more than a circular slide rule. When I sat my ground exam for the FAA licence, in Ft Lauderdale, our instructor/examiner used one of these to calculate our scores. (Actually, he miscalculated mine – he gave me 97% when it should have been 95%.) 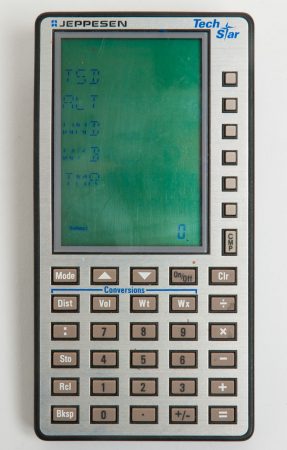 I don’t know if student pilots still use these things. I got my wings 27 years ago, but haven’t flown in quite some time. Even when I first started, most pilots would ditch these computers as soon as they got their licences and buy electronic ones instead – a trend only hastened by the arrival of handheld GPS units.

On the right is my old Jeppesen Tech Star electronic calculator that carries out all of the navigation features I mentioned above. What you can (hopefully) see on screen is the main menu of functions: TSD (time-speed-distance); ALT (density altitude); WND (crosswind and headwind calculations); W/B (weight and balance); and TMR (a timer function for timing journey stages or holding patterns).

I never really took to this device, partly because of its abysmal display. The low contrast of its LCD panel combined with skinny multi-segment characters made it hard to read in the comfort of one’s living room, let alone in the harsher environment of a cockpit. And the batteries would run out at inconvenient times.

The EA-6/CRP-1 didn’t suffer that problem. And there’s another reason why I hope student pilots are still forced to use these things. 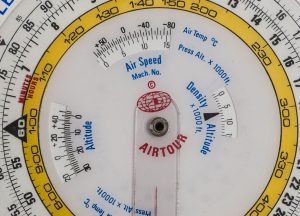 The critical thing about slide rules is that you have to have some idea of the size of the result of your calculation – or, to be more specific, its order of magnitude. The rule won’t tell you if the result is 3, 0.3, 30 or 300. In the context of working out, say, the time it will take to fly one leg of a course that should be fairly obvious. But the discipline is still useful.

I remember my physics teacher at school giving us a lecture about the evils of electronic calculators. The problem with them, he told us, is that if you accidentally add or omit a digit in a number, you may not spot the error unless  you know what sort of result you’re expecting. And the soulless perfection of electronic calculators lulls users into believing their calculations without question. By demanding that you already know the answer (roughly), slide rules don’t allow you to be that lazy. He finished the admonition by regaling us with the tale of a walkway in a building that had collapsed under the weight of people on it because the engineers had made a mistake in their load-bearing calculations – they were a factor of 10 out – having used (horror of horrors) a computer. To this day I don’t know if that was a true story.