Writing about the PowerBook 3400c finally gave me the motivation I needed to dig out our other surviving Macintosh from the 1990s – a G3. 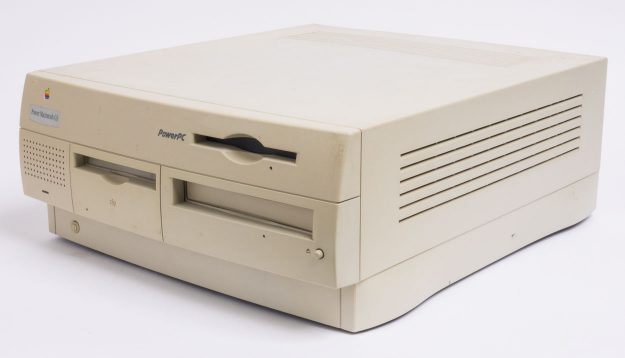 Yep, this one’s definitely in the beige box category. It’s not a lovely thing to look at, is it? (It also needs a bit of a clean.) But this was the workhorse of our business for years. 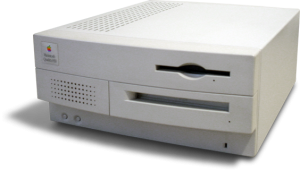 Our first Mac, bought in 1993, was a Quadra 650, which was more of a grey box. The More Significant Other had just decided to go freelance and, as a production editor, needed a workstation that could run QuarkXPress. At the time I was reviewing a lot of PCs for computer magazines and was heartily sick of Windows and DOS. So we had a highly excited trip down to Mac Warehouse (I think it was) in central London. When we got the machine home, we fought over who was going to use it first. I lost.

The Quadra had a 33MHz 68040 processor (yup, scorching) and a maximum of 136MB of RAM (which I think ours had). And it came fitted with a CD-ROM drive alongside the 3.5in floppy. The future had arrived. 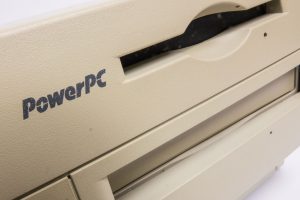 In the 1990s I did a lot of work for IBM and had seen a very early demonstration of the PowerPC chip. It was running Unix (AIX), OS/2 and Windows in their own windows on the same screen, fully multi-tasking and without emulation. Maybe it wasn’t Windows, maybe it was Mac OS 7 – I forget. It was a long time ago. Anyway, it was impressive. I was quite happy to have this powerful technology in the house.

You might not be impressed by its looks, what about its specs? The PowerPC processor canters along at 266MHz. And the machine has a whole 160MB of memory: the standard amount was 32MB and that’s what it says on the outside of the box, so obviously I paid for an upgrade. To put that in context, that 160MB would be filled by just eight of the photos I shot of the machine for this post. The hard drive has 4GB of capacity, most of which is still empty. The G3 was also notable for introducing a large backside L2 cache. 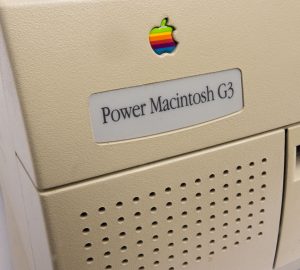 The logo still had some colour back then.

There’s a smattering of documents left on the drive – quite a trip down memory lane revealing all kinds of plans and ambitions we had back then, plus some work I don’t remember doing. Judging by the file modification dates, the last time the machine was used for anything much was 2005, which means it had about a seven-year life. Which ain’t bad.

The G3 was delivered with OS 8.0 and has since been upgraded all the way to 8.1.

In terms of software – well there’s another bit of time travel. There’s Office 98, Quark 4.01 (yay!), Illustrator 7.0 and Photoshop 2.5. Web browsing is courtesy of Netscape Navigator 3.01 and Internet Explorer 3.01 (uh-oh). There’s also a copy of UUTool 2.0.3, used to UUencode and decode files in order to send them as email attachments. Things are a lot simpler today.

As with the PowerBook, I used Netscape to browse to a directory on my local intranet where I’d placed a copy of Fetch. That allowed me to upload some screengrabs. Thank heavens for the Ethernet port because I don’t know how else I would have got files off the machine. 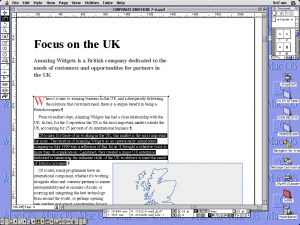 QuarkXPress, how I’ve missed you (although, to be honest, InDesign is better)

It was supremely well furnished when it came to storage. In addition to the hard disk there’s a 3.5in floppy drive, a CD/DVD-ROM drive and a Zip drive. A SCSI port around the back was usually connected to an external Jaz drive.

I was surprised to find that one of the expansion slots, which I must have fitted myself, provides two USB ports. I have no memory of adding this or what I used it for. Plugging in a USB thumbdrive does nothing, so I presume I’m missing an extension or something.

The expansion card I do remember fitting was the ISDN adapter. We used to run up huge bills on our ISDN line, but it did mean we could connect remotely to design agencies and publishers at a zinging 128Kbps when using both channels. (Note the ‘K’ in there.) 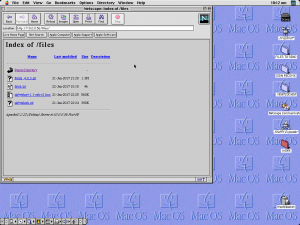 Browsing to the local intranet

The keyboard is a marvel. It weighs about the same as a small motorhome and I’m fairly sure you could use it as body armour. And it’s huge.

Actually, this is probably not the keyboard that came with the G3 – which I remember as being of a more generically rattly kind of thing of the sort that was being shipped with no-brand PCs. Instead, I think this one was left over from the Quadra. (The burglars were fairly stupid in lots of ways.) According to a label on the bottom, it’s the Apple Extended Keyboard II dating from 1990.

I’m getting fussy about keyboards (there will be more posts soon about mechanical keyboards I suspect). This one not only has a lovely action, thanks to Alps switches (or possibly Mitsumi as this is the M3501), it also carries some emotional weight for me. It’s the keyboard on which I wrote my first novel, Lady Caine. The ‘X’ is sticking and the whole thing is frankly filthy. But it’s such a beautifully made, classy piece of kit that I think it’s worth cleaning up. Somewhere I have an ADB to USB converter, so it would be usable on other machines.

Yes, I know, I’ll clean it I promise

According to Wikipedia (and they’re never wrong, right?) this was the last Mac to have an external serial port. I like serial ports – I use them a lot in my Raspberry Pi and Arduino projects. That tempts me to think I might find something useful to do with this machine. We’ll see.

In the meantime, I’m enjoying this trip into the past. Don’t throw away your old computers. One day they’ll be your memory.