The Retro Battlestations sub-Reddit recently ran a ‘not X86’ week in which people could show off their vintage computers. It was a reminder that there’s a world beyond Intel and AMD. (I don’t think anyone mentioned ARM).

I couldn’t get my act together in time to post a picture, but it did spur me to dig out my beloved old Apple Macintosh PowerBook 3400c laptop with its 200MHz PowerPC 603 processor. 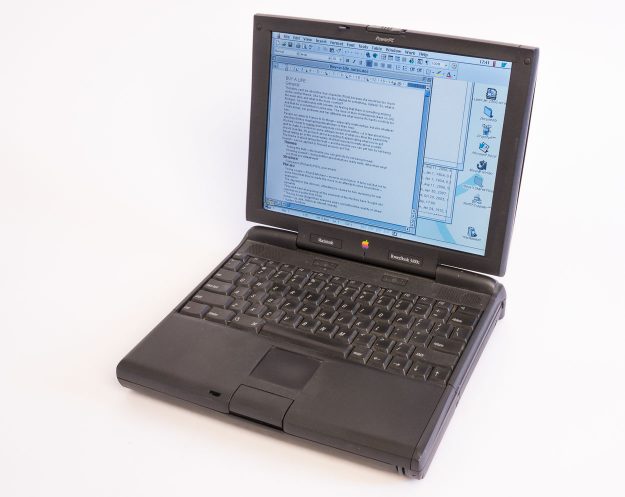 Why beloved? Because this machine represents freedom. I bought it at a time when we’d already acquired our house in France but couldn’t yet leave London behind. We shuttled between the two houses every month and I needed some way of carrying my office with me. Up to that point I’d been cramming our Mac – a big, beige box plus keyboard, mouse and hulking great CRT monitor – into the car, setting it up in the office when we arrived then repacking it in the car two or three weeks later for the return trip. It was a pain. My back still aches from it.

Today we’re accustomed to carrying around our offices in a laptop. But back then they were expensive animals, mostly the preserve of executives. Real people didn’t use laptops.

That said, I’d owned a laptop before, but that was a Triumph Adler 386SX machine (also sold under the Olivetti brand) that only just managed to run Windows 3.1. It originally had DOS installed and most of my IT journalist colleagues thought I was nuts trying to run Windows on it. So did the folks at Triumph Adler. One day I was at the TA offices in the UK and overheard a techie pontificating about how idiots who ran Windows on laptops were in for a big shock because the hard drives used in the machines weren’t built to withstand the constant disk accessing. I kept quiet.

Besides, my work required a Mac. QuarkXPress was the critical software for my business and only masochists would use the Windows version back then.

When the PowerBook 3400c came out in 1997 I jumped at the chance. Finally I could stuff my office in a bag and even commute with it by train, rather than always having to take the car. With 144MB of RAM and a 2GB hard drive (eye-wateringly large for the time) it did sterling service as my workhorse PC for several years. According to Wikipedia, the 3400c was briefly the fastest laptop in the world. Mine usually travelled quite slowly – by Ford Sierra, train and ferry.

After I stopped using it as my day-to-day computer, I’ve occasionally dusted off the PowerBook and put it back into service. But it always failed to deliver something I needed, such as a decent browser. And that’s because it was committing the sin of being only just out of date.

Now, sufficient time has passed that I no longer expect anything of it. It’s stopped being obsolete and has become vintage, and as such its attractions are its age and quirkiness. I can finally love it again for what it is – a charming relic of the past.

Sometimes this habit of occasionally firing up the old machine would create surprises. On one occasion, a couple of years ago, I opened the iCab browser and was momentarily disoriented by seeing the message ‘introducing iPhone’. 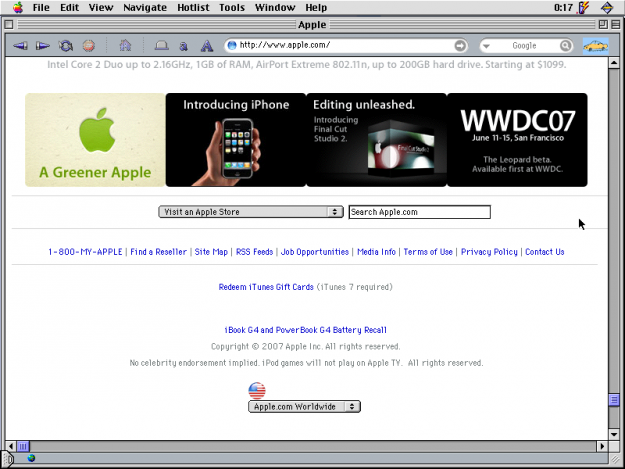 Introducing iPhone? When did I last use this?

It seems it had a page cached from when I last used the machine, back in 2007.

My first reaction on once more reacquainting myself with this old dear was, holy crap this thing’s heavy!

My second reaction was, no kidding. This is really, really heavy.

And then I remembered that not long after buying the 3400c I also bought a wheelie bag to help me cart it between countries. With battery, it weighs in at 3.3Kg (7.2lbs). That’s as much as a baby. (I don’t know if that comparison is useful to you.) So while my office was now moveable, my back wasn’t getting much relief.

It’s also very thick – not just to accommodate the batteries and thick LCD panel but also to make room for the removable drives. On the right of the machine is a bay that accepts either a CD-ROM drive (which I still have fitted) or a 3.5in floppy drive (missing in action, presumed dead). 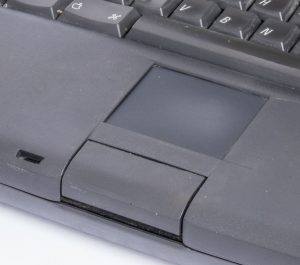 The machine dates from pre-USB days but there are two handy PCMCIA sockets. (Don’t know what those are? Ask your grandparents.) I still have a PCMCIA modem, and a wifi card that I bought much later in a failed attempt to press the machine back into service. I had an ISDN card for a while, too, which saw a lot of action because broadband was years away. And the SCSI port came in handy for writing large files to Zip disks which I would then mail them to the design agency. (Yes, that’s ‘mail’ as in Postman Pat.)

The screen is a reasonable size, albeit at a chunky resolution of just 800×600. But the trackpad … oh boy. It’s the size of a postage stamp (admittedly a large one). And being true to the spirit of the Mac there’s just the one mouse button. Forget about multi-touch – if you want a context-sensitive menu you’ll just have to use the Ctrl key, dammit.

(But having now used the machine for a few hours, I’ve decided the trackpad is surprisingly good.) 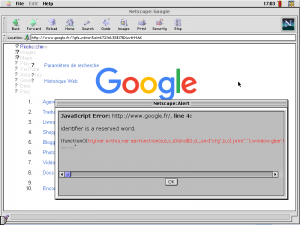 Attempting to Google in Netscape Navigator 4.04 did not go well

I’m not sure when Jony Ive joined Apple and I’m too lazy to Google it, but if he had anything to do with this creation I’d have to say it does not represent his best work. The plastic (and there’s so much plastic) is creaky. One of the little pop-out feet at the back stopped working about a year after I bought the machine, and there’s just a general air of clunkiness about it.

Worst of all is the keyboard. Words like ‘spongy’ and ‘rattly’ don’t fully encompass the sense of vagueness that overwhelms you when typing on this machine. As a non-touch typist I constantly have to look up at the screen to see what percentage of the characters I thought I’d typed have actually made it to the document.

At some point I seem to have upgraded to OS 8.1 (it came with 7.6) and lost Quark, which is a shame. I do have a copy of Netscape Navigator 4 on it, though, which comprehensively fails to load every modern website I try to visit.

Online, and using my current iMac, I found a copy of the Fetch FTP program and something that does SSH and Telnet (NiftyTelnet 1.1 SSH r3) and decided to load them on to the machine. The question was how. In the end, I copied the files to a web directory on my Raspberry Pi-powered HMV1960 project. Among other things, this is acting as an Intranet server.Then I just pointed the PowerBook’s browser at the directory and clicked on the files to download them. 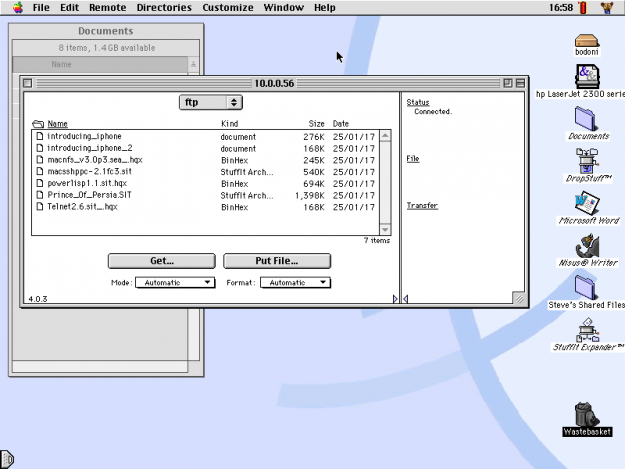 Using Fetch to connect to a Raspberry Pi.

Fetch works fine, but only because I’ve configured the Raspberry Pi to use plain-old FTP (via an installation of vsftpd) – it’s having no truck with the likes of SFTP.

I also installed telnetd on the Pi (yeah, yeah, I know, security, Russian hackers, Chinese cyber-fiends, blah, blah, blah. It’s an RPi on the local network for heaven’s sake). So I can now telnet into the HMV1960 just fine from the PowerBook, which means I can use it as a terminal. So far, I haven’t been able to get SSH client to play ball even after having installed suitable keys on server and client. Possibly the client’s encryption options don’t match those of the Pi’s SSH server. That needs more exploration. 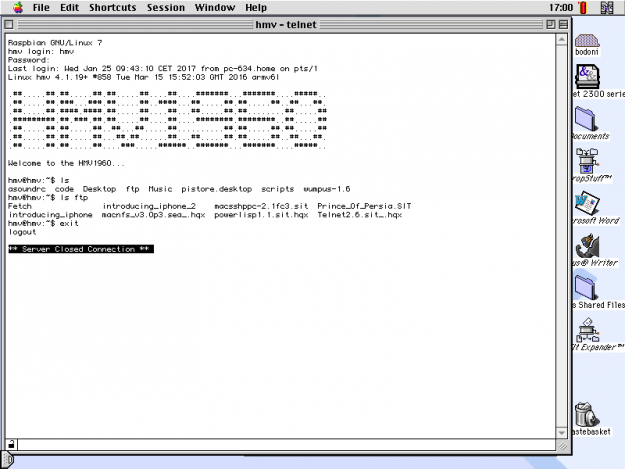 Telnetting into the Raspberry Pi

Oh, and one bit of software that’s still on the harddrive is the fab pool game that came with the machine. It’s the only game I’ve played extensively. I’m still crap at it.

There’s a lot of software kicking around on the web for this generation of Macs, albeit mostly games. And I can use this machine as a terminal. But I think it’s main function today will be to let me stroll down memory lane and appreciate both how portable computing can liberate our lives and how our backs no longer have to suffer in the process.