It’s one of the curses of getting older. One by one your friends die around you. This time the bell tolled for my beloved old Epson MX-80F/T III dot matrix printer. 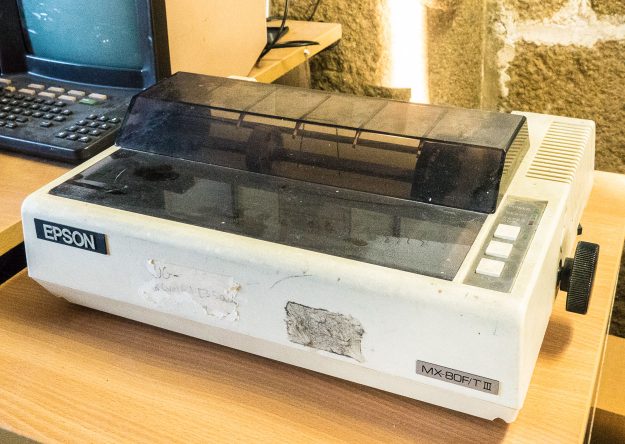 Is it really dead? Or just resting? Either way, it’s pretty grubby…

It’s hard to express how much this delightful old beast means to me. Buying it was a huge step because it was so incredibly expensive (kids who buy printers today – if any of them do – have no idea). I think it cost me about three weeks’ wages. Maybe more.

This was 1983. My computer of choice was the BBC Micro Model B (it would be another couple of years before I upgraded to a Master). I was working as technical editor on a photography magazine and most of the journalists about me abhorred computers. At the large magazine publishing firm where I worked there was only one computer on the premises – a mini that ran payroll and subscriptions. But I’d already discovered the joys of word processing, thanks to Wordwise and View. Hammering away on a manual typewriter, as I was forced to do at work, seemed so primitive.

Convincing my editor that computers were the wave of the future turned into something of a mission. And to do that I needed to somehow submit my copy in printed form, to be subbed and sent by courier to the typesetter. I needed a printer.

The Epson MX-80F/T III was the Rolls-Royce of dot matrix printers back then. This was before 24-pin printers became common and when laser printers were still exotic beasts unknown to ordinary mortals. So I screwed up my courage, said ‘screw you’ to the bank manager, and with my credit card in my hot little hand I got on the telephone to Watford Electronics.

It took an entire weekend of swearing to work out how to use the damn thing. Getting a dot matrix printer to do your bidding involves strange incantations of escape codes and the arcane manipulation of DIP switches. But by Monday morning I could present my first printed article to my editor.

He bitched bitterly about the faint, ugly type, but I could tell he was impressed. (About a year later I would switch to an MSX computing magazine that I helped the publisher to launch. My old editor once again cursed computers and wailed about how he would have nothing to do with them. Just months later he was asking me for advice about which printer to buy. Hah!)

Over the years I learned to push that printer to its limits. At various times my affections were swayed by 24-pin machines, an incredibly loud daisywheel printer and eventually my first laser – also an Epson. But none was as good for printing out program listings. And there’s something ineffably right about a dot matrix machine chugging away line-by-line.

In my early days as a hacker, the Epson MX-80F/T III became my logbook, capturing every line I typed and every response I received. Some would call that ‘evidence’, but for me it was a journal of happy times on other people’s computers. I gathered the printouts into binders. I wish I still had them.

The noise of an 8-pin dot matrix is like music to my ears. It could lull me to sleep. It’s a combination of frantic buzzing and pecking with a repetitive bass note as the head advances and the paper is pulled one line along. Admittedly, not everyone is so fond of it: I remember my landlady, back in the day, standing in the doorway of my room glaring at me as the Epson churned out another hacking session. But fair enough – it was 2am.

The Epson remained with me even as other printers came and went. “I’ll find a use for it,” I kept telling myself as I lugged it to yet another new home.

Recently I hooked it up to a BBC Micro again – my eBay-bought Master Turbo. Finding new ribbons and listing paper was surprisingly easy. And I still have the manual. Alas, I’d printed only a dozen or so program listings before the Beeb died and became a long-term restoration project.

And then, a few days ago, I thought, why not see if I can use it from Linux? I have a project on the go using a Minitel machine as a dumb terminal, with a Raspberry Pi acting as a proxy between the Minitel and the network. Being able to echo sessions to the printer might be handy. And I just happened to have a USB-to-parallel cable lying around (don’t ask). I connected the RPi to the printer, turned on the latter and then went to Google how to print from the Linux command line.

While sitting at my iMac I became aware of a loud crackling noise. I turned around to see smoke billowing from the Epson. It took me 0.0157 seconds to cross the office and yank out the power cable. Alas, I fear that fatal damage has already been done. 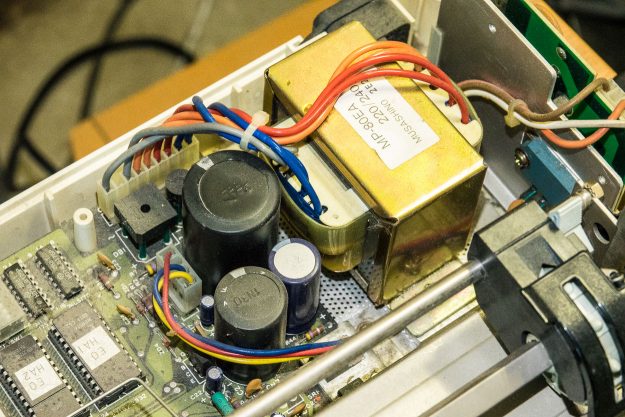 Surprisingly, opening the printer revealed no obvious candidate for the magic smoke. I’d expected to see an exploded capacitor. But everything seems intact. Smoke damage to the underside of the lid actually suggests that the smoke came from the transformer.

I need to take a closer look. It’s possible that it’s repairable when I get the time and motivation to look at it (aye, there’s the rub). So perhaps it’s au revoir rather than goodbye.