So after I built my wife her dream machine, I got jealous. I too would like to ease my way into sleep. After all, I’ve already built a machine to wake us up gently.

So I decided to build my own dream machine. And at first, my plan was to simply make a replica of Trish’s, but loading music rather than a hypnotherapy recording on to the SD card. Then, as ever, mission creep and a desire to do something new took over.

Rather than use a Teensy microcontroller board with sound card, as I did with Trish’s device, I figured I might use a Raspberry Pi with a DAC. That would give me lots of options in terms of expanding the functionality of the device. I have a feeling that blinkenlights might be involved, too.

Obviously I wasn’t going to be able to build all this into a small box that can be tucked under a pillow. I resigned myself to having a larger box that would sit on the bedside table. At first my gaze fell on some old external hard drives that had stopped working and whose enclosures I reckoned would make good project boxes. But then ambition got the better of me.

Trish holds a regular bourse – an evening in which she invites all her women friends around to shout and drink wine. (Or so I’m deducing from the little evidence I can gather from my hidey-hole in the office. I daren’t go downstairs and actually check what they’re doing.) They also swap stuff – everyone brings a sack of clothes, DVDs, books and knick-knacks that they no longer want and anyone can take anything that takes their fancy. All the stuff that’s left over goes to a charity shop.

And so I came by the retro-styled radio. Trish squirrelled it away for me, knowing that I’d like it. And indeed I do. 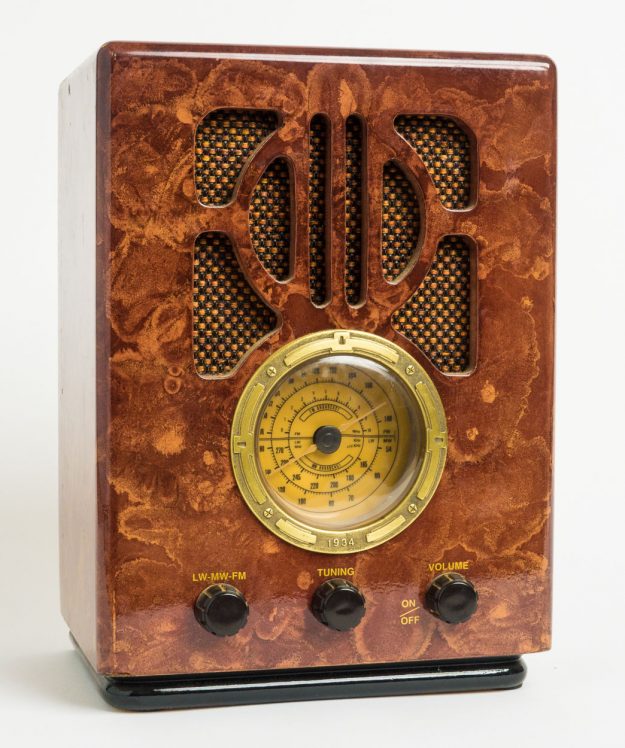 As a radio, it sucks. It is, frankly, a cheap piece of tat. Made by Steepletone, you can buy these things on Amazon for £40. Why you would is beyond me.

It had another original function – when I took a proper look I was astonished to find a strange slot on the side panel. For one heart-stopping moment I thought it might actually be an 8-track player. But no. It’s a common or garden cassette player. 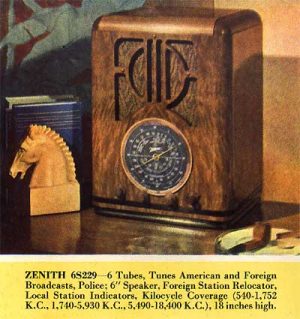 So, you wouldn’t want to use this as a radio/cassette. But as a project enclosure – well, that’s a different story. I’m going to call it the DreamBox.

In a way, it’s doubly retro. Although brand new, it boasts technology (the cassette deck) from a bygone era. And its styling harks back to something almost beyond living memory – the bezel for the glass display proudly carries the lie ‘1934’. It seems to be channelling the 1930s Zenith 6S229.

I’ve just spend a happy half-hour taking the thing apart. All that’s required is some unscrewing of screws and snipping of wires. There’s a transformer that has gone into the bits box. The cassette mechanism has gone into the bin, save for its DC motor and a rather nice little microswitch which have also been bit-boxed. 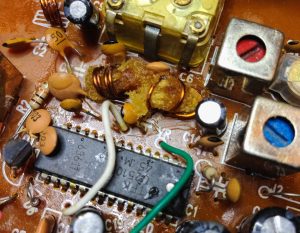 I don’t know what that stuff is, but I’m pretty sure it shouldn’t look like that

The circuit board appears to be something from an earlier and more innocent age. You could almost convince yourself it’s genuinely vintage – if, by ‘vintage’, you mean the 1980s. It wasn’t in an altogether happy state – for instance, there’s a coil on the board that contained something that appears to be auditioning for a horror movie. I might desolder and salvage a few bits (such as a potentiometer), but on the whole I think this is going into recycling.

There was one detail that spoke volumes about the quality of manufacture. Someone had gouged away one corner of a block of MDF to which they’d mounted the cassette mechanism. 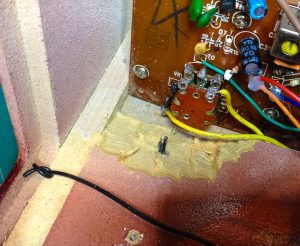 This was to make room for a component on the PCB. No neat sawing or routing here – it looked like it had been hacked with a blunt flat-head screwdriver.

So that’s as far as this project has got. I’m awaiting the arrival of a new Raspberry Pi and the DAC. I also need to order a panel-mount 3.5mm stereo audio jack. And I need to work out what the hell I’m doing. More posts to come.

By the way, I said I couldn’t understand why anyone would pay £40 for one of these, but I take it back. As a project enclosure it actually makes some sense. ABS enclosures can be stupidly expensive. Yet here you get a capacious box (outside dimensions 280 x 200 x 150mm) with a built-in speaker, pre-drilled holes for three potentiometers, a nice glass window for lights and a free transformer. Being made of MDF it’s easy to work with. And it’s not boring and grey. Makes you think… 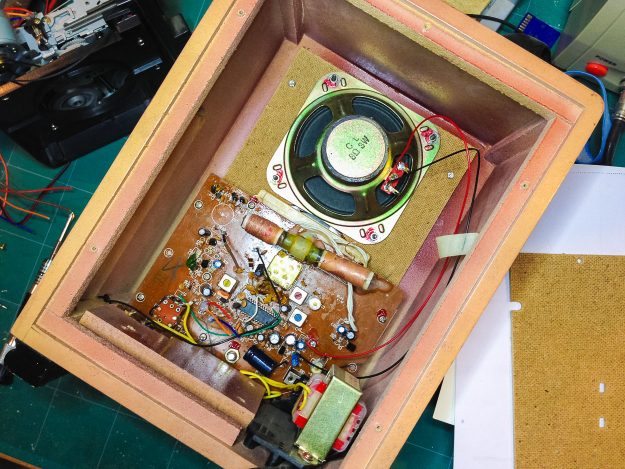 Once I’d got that nasty PCB out, and salvaged the transformer, it’s quite a nice project box