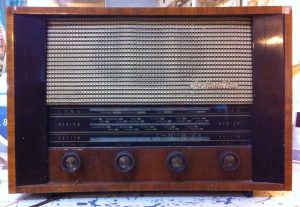 So I was looking around for a case for a Raspberry Pi and I noticed this old radio gathering dust in the cupboard. And it all just got out of hand from there.

The HMV Model 1376 valve radio dates from 1960. When I bought it in a junk shop for a few quid it was working. When I took it out of the cupboard and blew the dust off it wasn’t working any more. “This’ll do,” I thought.

Radio geeks will probably blanche at this. But hey, I’m a computer geek. So I ripped out all its innards. 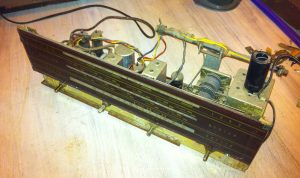 Well, okay, I was a little more careful than that. The guts of the radio, including the glass panel with the stations printed on it, came out pretty much all in one module. I’ve kept it intact, safely stowed away in a box somewhere, except for the glass panel, which I wanted to reuse. (Sorry for the somewhat crap smartphone photos of these early stages.)

My first thought was to leave the huge speaker and its fabric mesh in place. I even thought of trying to hinge it somehow, so you could lift it up to reveal … well, whatever I might do next. In the end, though, I figured that was too much complication. 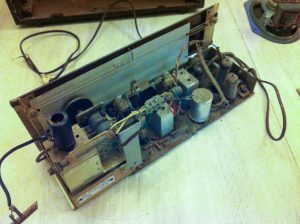 Bear in mind that my original idea was simply to come up with a box that could house a Raspberry Pi and would be connected to the home network to be used for various programming experiments.

But when you have a box like this, there’s a real temptation to take things too far. So here’s the plan for this project:

Some of this I’ve already done and I’ll give the details in following posts.