So I’ve decided to build an 8-bit computer based on the 6502 microprocessor. Because nothing screams ‘success!’ like creating something that was obsolete 30 years ago.

The truth is that I got into retro-computing partly because I wanted to understand computers better. Yes, I can code well enough for my needs in Python, Objective-C and Swift using sophisticated frameworks, and that’s a lot of fun. But I still had a desire to understand what’s happening at a deeper level.

Partly this stems from a feeling of … well, what is it? Guilt? Regret at a lost opportunity? Whatever you might call that nagging sensation, I wish I’d got into assembler back in the days when I was hacking on my original BBC Micro. I pretty much stuck to Basic, which was exceptionally good on the Beeb. As I’ve never been into games, I rarely wrote a program in which speed was an issue. So Basic gave me everything I needed. But I always felt I’d missed out on really understanding the computer at a deeper level.

I could correct this by coding in assembler on x86, but honestly, who does that? Or I could write assembler for AVR chips. That’s a real possibility and I hope to get around to doing that. But there’s a simplicity about the old 8-bit micros that I like.

So why the 6502? I considered the Z80, as there are lots of how-to projects on the net. But the 6502 was at the core of my beloved BBC Micro, and I’ve already done some assembly language programming on the BBC Master Turbo I bought a little while back (although that’s currently poorly).

The great thing about the 6502 (and Z80 for that matter) is that it’s still available, albeit in a lightly updated form.

My plan is to start with a kit so that I can gain understanding of the basic concepts with something that functions. Then I’ll work back from that, replacing sections with my own designs. That way, I don’t have to worry about building a lot of stuff before I can find out if anything works. Well, that’s the plan…

The great thing is that I know absolutely nothing about any of this stuff. I’ll be learning everything from scratch – which means I’ll make lots of mistakes. But that’s really the point. 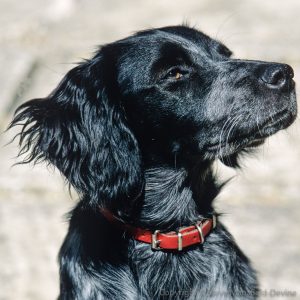 First things first, though. The most critical step in any computer project is coming up with the right name. I’m going to call it the Zolatron. The ‘tron’ suffix was popular back in the 70s and 80s and so has the right period feel to it. And the ‘Zola’ bit comes from the name of our beloved spaniel who passed away this year.

He was a faithful companion and a great friend, obedient up to a point, with a tendency to suddenly wander off and do his own inscrutable thing. He could be infuriating but was always entertaining. With any luck this project will share some of those qualities.