It’s amazing what people throw away. This morning, the More Significant Other and I stopped off at the local dump to drop some things into the charity collection point. And my eye was caught by a bin full of computer monitors. Sitting on top of the Nineties-era Dell and Acer CRTs was something a little more retro-looking. 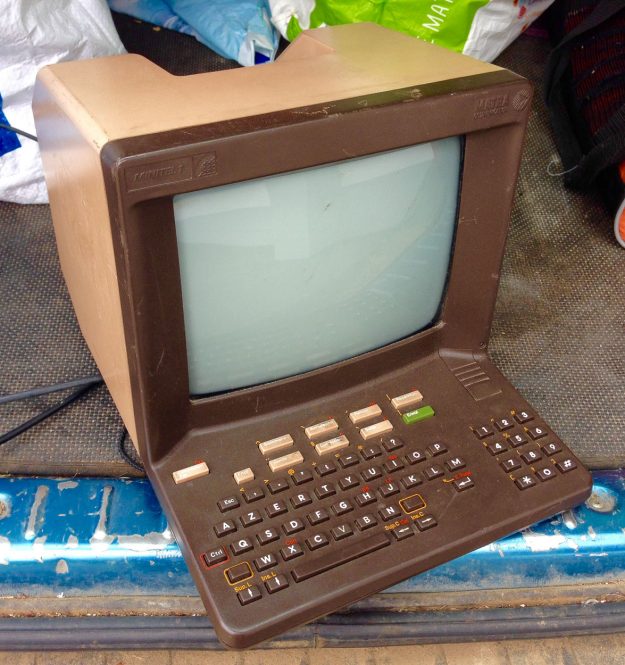 I knew what it was before I got to the bin. It’s a Minitel terminal – a remnant of France’s leap into the information age. The Minitel service provided online information, shopping and messaging long before the Internet was available in homes. The full roll-out happened in 1982, having been trialled in Brittany since 1978.

There were other viewdata services: in my first job, as a photographer’s assistant, my boss had a Prestel terminal – the UK’s equivalent to Minitel. And when I finally got online a couple of years later (1983, I think), it was via the Prestel-based Micronet 800 service. But Prestel was initially very expensive. What made Minitel such a huge success was that the terminals were loaned out free to subscribers. (France Télécom recouped a large chunk of the cost by not handing out phonebooks – the Minitel terminals replaced them.)

This largesse created an immediate market of millions which attracted businesses to the service. It was wildly successful. In fact, the success of Minitel was partly responsible for France being slow to embrace the Internet. But ultimately it was the Internet that brought the demise of the domestic system. It was switched off in 2012.

By that time, many people had bought their terminals, which ended up, presumably, stuffed into cupboards. Someone finally decided to dump theirs at our local recycling centre. I got the MSO to ask the guy in charge if I could take it (it’s usually best to send in a woman to do these jobs). He seemed quite pleased, which was a relief. The guy at the other dump we use is a charmless jobsworth who won’t let you take the electronic stuff. Anyhoo, it was quickly sitting in the back of our car.

Although it’s somewhat dinged, I figured I might yank out the CRT, bolt in a 10in TFT HDMI display (which I happen to have lying around) and use it as a monitor. I might even, I thought, have a go at decoding the keyboard and re-arranging the keys into Qwerty format and use it as a dumb terminal. I have no idea how to do such a thing, but I’m sure it’s feasible. 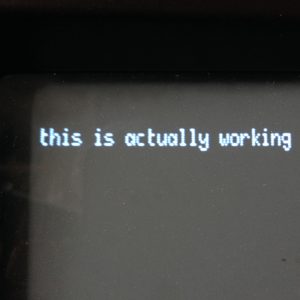 So imagine my surprise when I tried switching it on. Yup – it works!

A little bit of online research (and don’t you just love it when you can call two minutes’ worth of Googling ‘research’?) and I found that these machines can be used as serial terminals.

Around the back of the machine, under a small, sprung cover, is a five-pin DIN socket providing serial communications at, I believe, 4800 baud. It operates at 5V TTL level, so I just need a little bit of level shifting to hook it up to a Raspberry Pi, which is my current plan.

These machines aren’t hard to find. A quick look on eBay.fr pulls up machines like this for €10-20 euros (plus at least the same again for shipping). The thing is, though, I never would have bothered to buy one. But to find one just sitting there for the taking was too much to resist. And much of it would probably have ended up in landfill. So, win-win. 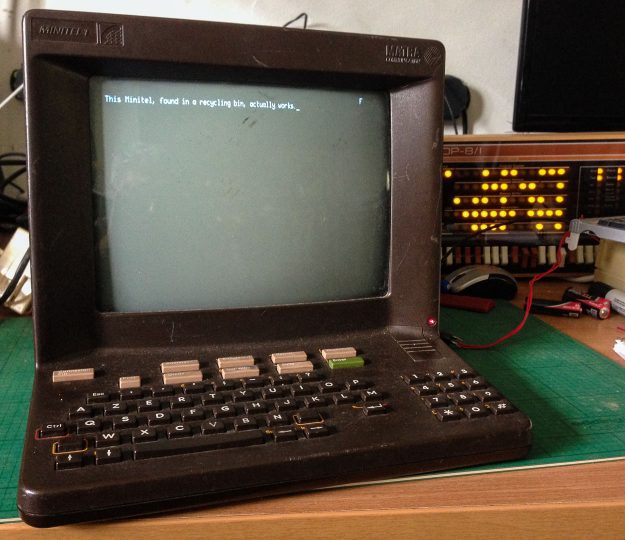