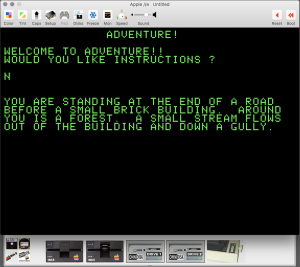 My first contact with Adventure – or Colossal Cave, if you will – was in 1984. I was working on the launch of a magazine for MSX computer users and, to help things along, our innocent publisher had fixed us up with a Telecom Gold account.

Aside from providing us with an email account, this also gave us access to online databases and (I very quickly discovered) Adventure. And all for the very reasonable rate of (if memory serves) about £60 an hour. I can’t remember what I was paid back then, but it wasn’t anything approaching that.

The hours passed in blissful reverie as I explored the twisty mazes and the enchanting caverns. And then we got the bill.

Now, we had some kind of special deal with British Telecom (as then was) and I’m pretty sure we didn’t end up paying the full whack. Nevertheless, the publisher forked out several times my monthly salary to pay for my evil dwarf addiction. Selah.

I toyed with other games during that brief period when text adventures from the likes of Infocom were coming thick and fast. The Hitchhiker’s Guide to the Galaxy and the Leather Goddesses of Phobos, with its scratch’n’sniff card, were my favourites. But I never forgot the hook that the original Adventure had put into me. Nor the fact that I’d never completed it.

My recent, growing fascination with vintage computing has led me underground again – down through that infamous grating into a subterranean world of puzzles. And I now have several ways of getting there, none of which cost £60 an hour.

My build of the Grant Searle multicomp runs CP/M (actually Oscar Vermeulen’s disk) and where better to get an Adventure fix? And talking of Oscar, Adventure is on one of the PDP-8 disk images I can (and do) run on the PiDP replica. The Adventure disk was one of the first I turned to after discovering the fab Virtual][ simulation. And I’m fairly sure there’s a *nix copy hanging about somewhere too.

In between exploring those caves, I’ve been known to fire up copies of Zork 1 on Virtual][, MS-DOS 6.22 running on VMWare and FreeDOS running within Virtual Box. I alsi have Hitchhiker’s Guide and Leather Goddesses for Virtual][. In fact, pretty much the first thing I do, having built or implemented a retro machine, is find a text adventure to run on it.

Other than brief flirtations with Chuckie Egg and Elite, both on the BBC Micro, I never really got into games. Oh yes, I spent many hours on Aviator and Microsoft’s Flight Simulator, but those aren’t games, they’re simulations. It’s different. And besides, I’m a pilot.

Yet text adventures have never quite let go of me. And it’s not because they don’t have images – it’s because they have the most wonderful images, far beyond the capabilities of even today’s graphics systems and games designers. It’s just that they’re my images, in my head.

The text adventure – or, as some would have it, interactive fiction – exploits the most powerful image processor known to mankind, the human imagination. The documentary, Get Lamp, explores this in a somewhat wistful, occasionally melancholy manner. There are, it seems, people who still write adventure games – there’s even an annual competition. I found the documentary left me feeling a little sad for these people, while wanting to be one of them. I guess that’s the tragedy of being a geek.