A friend posted this video on Facebook and my immediate reaction was, “I had that modem!”. On closer inspection it seems I was wrong. The modem in the video is the WS1000 whereas I had the Miracle Technology WS2000, capable of a scorching 1200 baud (half-duplex), as well as 600 and 300 baud full duplex and 1200/75 — the last being used for teletext systems like Prestel. 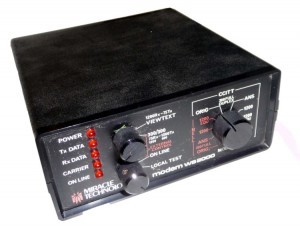 My memory’s a little hazy (for all the right reasons), but I think I bought the modem when it was newly out, in 1984 or maybe 1985. It was at a computer show in London and I bought it right off the stand. I’d first spent a nervous hour or so walking back and forth past the stand because the asking price was getting on for a week’s salary — about £130.

Naturally, I didn’t need ITV’s Database programme to tell me about the joys of online life, such as sending emails. By the time the programme came out, in 1984, I’d been online for more than a year. Possibly two. Like I said, memory isn’t my strong suit.

First, it was with the Prism VTX 5000 modem that sat under my Sinclair Spectrum 48K. Then, when I evolved into a BBC Micro user, I needed something a little more serious to match my newfound status. Hence the Miracle modem. (Mine was in beige, though.)

I got my first email address via the Micronet 800 service that was delivered via British Telecom’s Prestel viewdata network. In fact, I’ve just read that Micronet started in 1983 and I know I joined soon after, so that dates it. It seems I have Wikipedia instead of a memory these days.

On Micronet, your user ID for the service consisted of nine numerals, and was generally the same as your phone number. This had an unfortunate side-effect.

You see, back then I was into a little light hacking, and hung out on bulletin board systems (BBSs) frequented by like-minded people. Then the infamous ‘Hugo Cornwall’ (a pseudonym hiding a couple of people, one of whom would later become a good friend) wrote The Hacker’s Handbook. The authors included a number of printouts of messages from bulletin boards in which they’d scrupulously redacted the ‘from:’ and ‘to:’ fields. Alas, they didn’t do the same for the contents of the messages. Several of mine were included, including one where I mentioned my Micronet address.

So, let’s recap: a book for wannabe hackers; my mailbox address which happens to be the same as my phone number. See the problem?

“Do you have any interesting numbers?” they’d always ask. Remember, this was in the day when you connected to a computer by dialling its number on your phone.

“I don’t think we should discuss this over the phone, do you?” I’d grumble. That was usually enough to get rid of them.

Strangely, I never received any messages via my Micronet mailbox. Maybe they weren’t very smart hackers. Nothing much changes.

The truth is, I hardly ever received email then. For what seemed a very long time, I was the only person I knew with an email address. Think about that for a moment. And reflect on how pointless that makes it.

I worked on a photography magazine, and I did strike up a brief friendship with the marketing manager of a camera company when it turned out he was in exactly the same position. Alas, other than a partiality for Chuckie Egg, we didn’t have a lot on common (he seemed strangely uninterested in photography) and that soon fizzled out.

And as for the dialling thing, the expense didn’t end with the modem. BBSs were fine and wonderful things, but they were always engaged. Some might have as many as four phone lines, but most had only the one. So only one person could use the board at a time. (Not that you lingered — my phone bills were astronomical.) When I bought the Miracle modem, I had a standard rotary-dial phone. Push-button, touch-tone phones were exotic beasts and largely the property of the rich, or characters on TV shows that you were supposed to believe were rich.

However, after you’ve dialled the number for a BBS 20 times and the bloody thing’s still engaged, you start thinking that the £70 price tag for a fancy phone is worth every penny. My fingers were wearing out. And yes, £70 is what I paid for a little beige beauty that not only had buttons and an LCD panel showing the number you were dialling but — glory of glories — a redial button.