This photo is just a teaser for a couple of forthcoming blog posts. 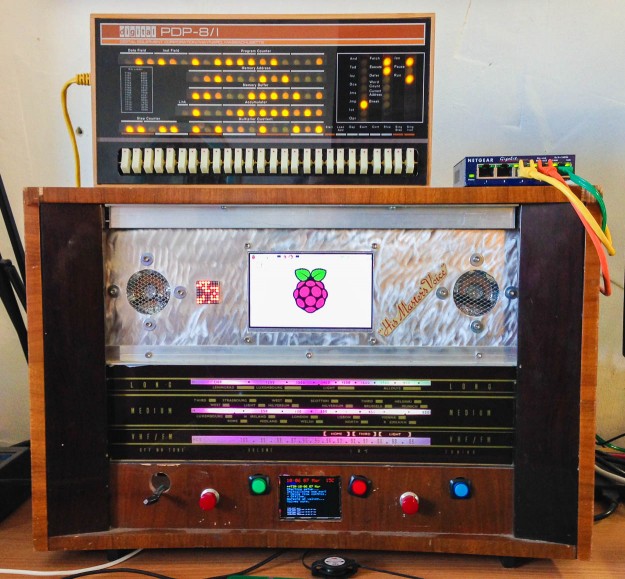 Both of these are, in effect, glorified cases for the Raspberry Pi. And I know what you’re thinking … “kinda big, ain’t they?”.

On top is the PiDP – Oscar Vermeulen’s recreation of a PDP-8/I. In this picture it’s in its not-quite-finished state.

Below is a 1960 HMV radio that I gutted to house an RPi and Teensy. This is very much a work in progress.

While very different projects, they share a couple of characteristics.

Blinkenlights! Ah yes, no serious retro-computerist can live without blinkenlights. Indeed, when I’ve tired of struggling with OS 8 on the PiDP (running under SIMH), I’ll probably just use the machine as a blinkenlight box (and maybe as a server of some kind).

The HMV just has a modest LED matrix (it’s to the left of the main LCD screen) that blinks randomly, but can also be used to print messages, either as scrolling characters or lines of ASCII binary. But it has other lights, too…

Both machines also give me that warm fuzzy feeling you only get from retro devices. I haven’t fully decided what the HMV will do yet. So far, it’s a Twitter client, and I have some ideas around that. Maybe I’ll use it to run other simulations under SIMH. Or maybe I’ll just use it to play Hunt the Wumpus. Stay tuned…