Keyboards are very person things. What suits one person won’t suit another. And I’m very, very picky. After 35 years of using computers, I know what I like, and what I like is what I’m typing on right now. 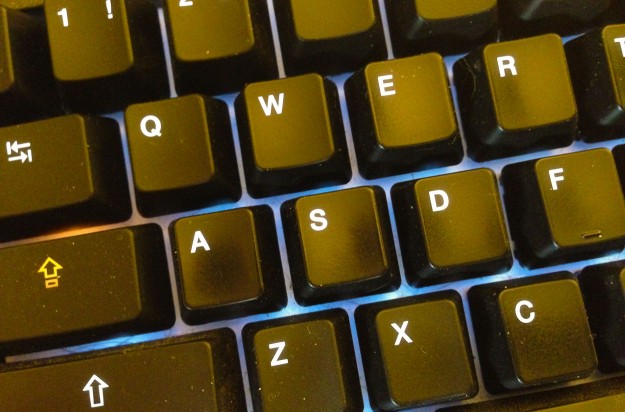 I’ve always been a fan of keyboards with a positive click. The classic IBM keyboard with a buckling spring was my idea of typing heaven. Back in the days when I reviewed PCs, I was sometimes known to keep the keyboard from a review machine (sending back a replacement sourced from … well let’s not get into that) if I liked the feel of the review sample. For years, I kept an NEC keyboard until the keys literally started to fall off. 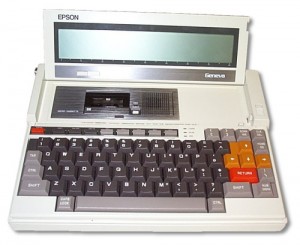 For a while, I had an Epson PX-8 laptop that had a sublime keyboard. It encouraged you to write just for the pleasure of pressing the keys. For long after it became obsolete technology – what with CP/M and Wordstar running off ROM and just an eight-line LCD display – I used that machine because of the keyboard. (Hell, I’m still tempted to search eBay for one.)

But decent keyboards became harder to find. They evolved into cheap commodity items, with a nasty, rattly feel to match. Then we transitioned to laptops with their low-profile keys that barely move before your fingertip comes to an abrupt stop. Being a geek, I have a bunch of computers, but would find myself drawn to the Lenovo laptop from time to time just because it has a nice keyboard. (It’s crap in every other conceivable way.)

Alas, just as computer vendors moved to low-profile keys, something else happened. I developed osteo-arthritis in my hands. Typing – and even worse, using a trackpad – became a painful experience. When writing, I found myself inclined to use shorter words, and was reluctant to edit, just because it saved me some pain. 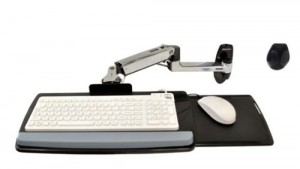 I also have arthritis in my neck, which makes working at a desk problematic. I switched to working in a reclined chair, but getting the laptop into the right position was always a struggle. My solution was to mount an iMac on a flexible arm and a keyboard on another arm (the Ergotron LX).

That meant I could use a proper, mechanical keyboard again – but which one? After a lot of research, I narrowed it down to two.

The Code keyboard has a lot of features I like. It’s retro-illuminated, with the ability to adjust the brightness of the backlighting. It’s equally at home on PCs and Macs (thanks to DIP switch settings). And it comes in a compact form – I didn’t want a keyboard with a numeric keypad because that puts the mouse too far away.

I also liked the look of the Das Keyboard. I read lots of good things about the build quality. It doesn’t have backlighting, but it does have a built-in USB hub (only USB 2.0, though). The only problem is that the Mac version doesn’t come in the compact form.

It was hard to choose between them. And there was another decision to make. Both keyboards come with a choice of switches. The Code keyboard uses Cherry MX switches while the Das Keyboard uses similar but non-Cherry mechanical switches.

These switches offer a variety of clickiness and activation force. In the end, the decision came down to either MX Blue, for the ultimate clickiness, or MX Brown to give my fingers a softer landing.

In the end, I got both. I bought the Code keyboard with MX Blue switches and the Das Keyboard with brown switches. So how did that work out for me?

Well, a slightly mixed bag, to be honest.

I fell in love with the Code keyboard straight away. The built quality is superb. The backlighting is great for when I like to work in subdued light in the evenings. Many of the Mac’s special functions are available (screen brightness and audio volume being the most important). And the size is perfect for my needs.

And, at first, I really liked the clickiness of the keys. Yes, the MX Blue switches do tend to make quite a racket. This is not a keyboard I’d feel comfortable using in a shared office. But that didn’t bother me much. After a while, though, I started to find the thump at the end of each, fairly long keystroke was tough on my joints, especially the first joint of each finger. Things were getting painful again.

The Das Keyboard, on the other hand, is a joy to type on. It’s not as positive as the Code with its blue switches, but much quieter and softer, but still with just enough positivity. I also like the special Mac-oriented features – the thumbwheel that controls audio volume (also available on the PC versions) and dedicated buttons. The USB hub makes cabling simpler when using a mouse, too. Alas, the lack of backlighting and the size of the keyboard meant I couldn’t use it as my main keyboard – it’s been relegated for use with a Mac Mini.

I was about to order another Code keyboard – with MX Brown switches this time – when I stumbled across UK Keycaps. Someone on Google+ had posted an image of the Das Keyboard with its function keys replaced with red keycaps, to give it that BBC Micro look. While perusing the UK Keycaps site, I found that they sell O-rings for Cherry MX switches. While I was shopping, I also added some orange filters that fit over the white LEDs behind the keys.

The transformation has been remarkable. With the O-rings in place, the travel of each key is slightly shorter and each keypress ends with less of a bang. Yet the satisfying click is still there. The noise has diminished considerably. The Code is now the perfect keyboard. I’ve used the orange filters behind a handful of keys – mostly those I don’t use much (such as PrtSc). You can’t use both an O-ring and a filter. The filters reduce the amount of light coming from the keyboard and … well, hell, I’ll just say it – I think it looks cool.

My search for the perfect keyboard has been a life-long mission. I think it’s over.