Someone in a BBC Micro community on Google+ asked members to post pictures of their setups. So I quickly snapped this. 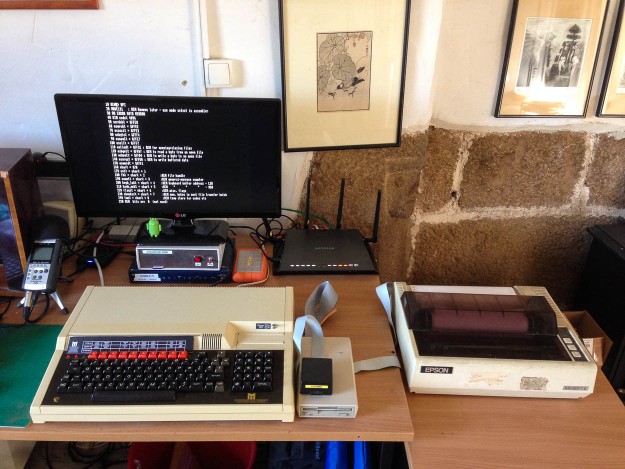 There’s quite a lot going on in there – at least, there will be when I get the time to finish it. Alongside the BBC Master Turbo is a single 3.5in FDD and the TurboMMC storage device that I wrote about recently.

On the right is the Epson MX80 F/TIII dot matrix printer that I bought in 1982 (for about a month’s wages) and is still going strong. Can’t say that about … well, pretty much any other piece of technology I own.

Underneath the TV, in the light-grey box, is the CP/M computer built using an FPGA board, which you can also read about elsewhere on this blog. My plan is to use the BBC Master as a terminal for it. I just need to make one small change to the CP/M machine’s serial port.

Underneath that is an old ISDN router box whose innards I replaced with a Raspberry Pi. This is currently connected to the BBC machine via the serial port. I’ve written programs for the Beeb and the Pi that allow them to talk and exchange files. Neither program is finished – nor will they ever be, because I keep thinking of different ways of doing them, which means they are constantly being (partially) rewritten.

One day, I swear, I will get them done, at which point the Pi will act as a connection to the local network and maybe even the Internet for the Beeb. When I get there, I’ll be sure to share.