Much as I enjoy the truly retro experience of using floppy disks, they can become a bore. For my BBC Master Turbo, I have two disks I use a lot – one with ROM images, the other with the software I’m working on at any given moment. And the wrong one is always in the drive. 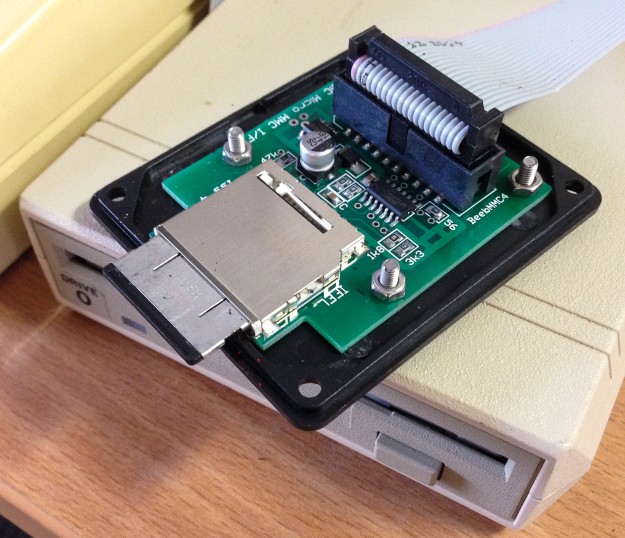 I wanted to buy RetroClinic’s DataCentre, but they’re out of stock with, apparently, no immediate prospect of any more being made any time soon. So I went for the next best thing.

The TurboMMC device on Ebay is small, cheap and easy to fit. It costs £31.50 on eBay, with cheap and fast shipping to France. A ribbon cable connects it to the User Port (and that’s where it gets its power, too). And there’s a ROM to plug in. That’s it.

The unit comes as a board, vulnerable to the elements. In the pic above, I’ve already bolted it to the base of a project box, so there’s no chance of any traces or connectors touching anything nasty. The kit includes various bits of hardware, should you want to mount the device inside the Beeb, although this can involve a bit of faffing about in order to run the ribbon cable. I decided to have it outside the computer, like an actual disk drive.

The disk operating system on the ROM effectively gives you four virtual drives into which you can ‘insert’ disk images held on the MMC card. So, let’s say you want disk 236 inserted into drive 0, then simply type:

There’s a lot more to the disk operating system than that, but it gives you an idea of the simplicity of the device. You can, for example, specify which disks should be in which drives on boot-up. The 128MB MMC card supplied with the unit can hold 511 disk images of 200KB each. A CD is also supplied with some handy Windows utilities, including one for creating disk images and moving files to them (I run this in a WinXP VM on my Mac). The CD also has numerous other handy files, including ROM images.

But it’s the MMC card itself that is the real treasure trove. It already has hundreds of disks set up, each packed with software. I suspect most of the files are games, which don’t interest me*, but I can’t say for certain because I’m still wading through it all.

Back in the day, when I first owned a BBC Micro, I had a lot of disks. A lot. But never as many as are on this MMC card. For a while, in 1987, I was loaned a 20MB Winchester drive to which I copied every bit of software I’d either bought or had written. It occupied a small corner of the drive and I remember thinking, “Who could possibly need 20MB?”. 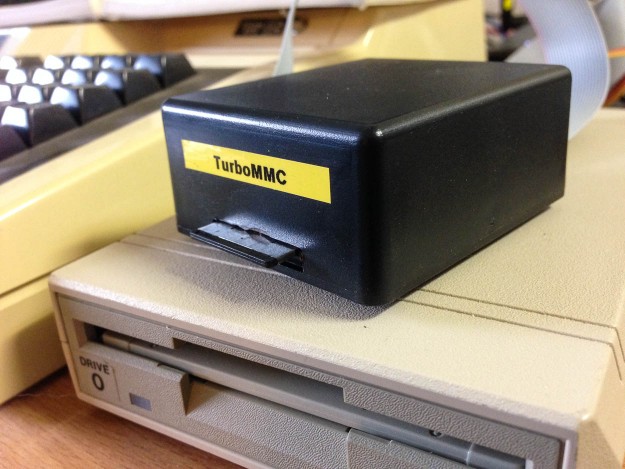 The TurboMMC is now safely ensconced in the project box. I’ve left the MMC card sticking out so that I can move it to my Mac for backing up once in a while. I can’t seriously see myself needing to swap it for another, though.

(* Okay, while browsing through the files on the MMC, I did pause to spend an amused 15 minutes playing Chukkie Egg – one of only two games I’ve ever felt inclined to play. The other, of course, was Elite. Various flight sims don’t count because they’re not games, they’re simulations.)