So I bought an Acorn BBC Master Turbo… Again. 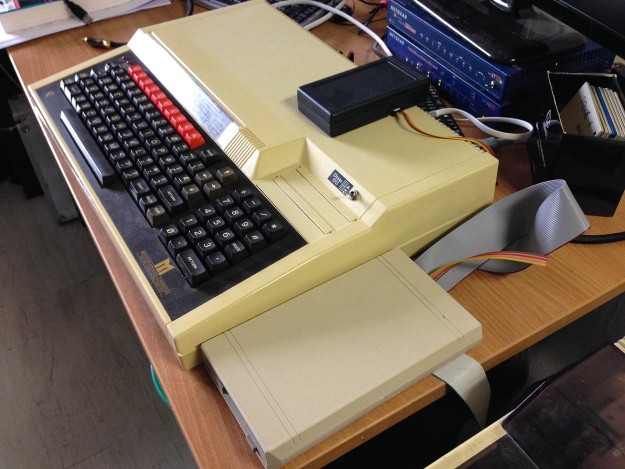 My introduction to computing – my gateway drug, if you will – was a Sinclair Spectrum 48K. I ordered one at the time of launch and then waited. And waited. And eventually a friend sold me his (he’d been earlier in the queue) and I cancelled my order. He’d decided the Spectrum wasn’t good enough for him and had bought a BBC Model B.

I programmed obsessively on that Spectrum, all in Basic. And it wasn’t long before I, too, was feeling its limitations. So I also splurged £400 (plus Tube fare to Wimbledon) to get a Beeb. It was a revelation. It wasn’t long before I was spending again – this time for a dual 40-track 5.25in disk drive (and another long trip to a guy who did DFS installations). And then an Epson MX-80F/T III dot matrix printer (which I still have and is still working, more than 30 years later).

Unlike the Speccy, I could actually use the Beeb for work. I’m a journalist and Wordwise was a godsend to someone who was still bashing out long articles on manual typewriters. So what if my editor and the typesetters complained about the hard-to-read dot matrix printouts? That was their problem, the Luddites.

As soon as the Master was launched, I upgraded. With its second processor and shadow memory, the Master Turbo was a beast, with more bytes of memory than I could possibly count (but then I did drink a lot then. Did I mention I’m a journalist?).

It wasn’t long, though, before I was lured to IBM PC compatibles. I’d moved into IT journalism by then and the house was full of review machines, many of which I got to keep, some of which I even sold. The Beeb started to feel like a toy that was taking up too much space. So it was sold too.

In the (many) years since, I found occasion to regret that decision. There is something real about those old 8-bit machines. Today’s computers are incomprehensibly powerful, sleek and practical (I’m writing this on a MacBook Pro with Retina screen – a thing of beauty). And I do enjoy programming with advanced frameworks and modern languages (Cocoa, Objective-C, Swift, Python et al). Yet I found myself missing the honesty and directness of the 8-bit environment.

I’ve also found myself going through a period of intense nostalgia generally (not unconnected with the recent death of an old friend). For example, I bought myself a Zenith B camera (I’m a photographer, too), which was my first SLR. I’m not some sort of Lomo hipster – it’s just that the simplicity appealed.

On the computing side, I assuaged the longing to some extent by getting into Arduino, BeagleBone and Raspberry Pi projects. But there was still something missing.

Until I went on to eBay and bought the BBC Master. It’s from RetroClinic, so has been fully refurbed, with new power caps and dual OS. And taking it out of the box took me right back to the day I unboxed my first Master.

It’s astonishing how fast the commands and habits came back to me. And having since increased my technical knowledge and skills, I’m struck by how good the Beeb really was for its day, with an unbeatable Basic and remarkable array of interfacing options.

And it’s not just going to sit there gathering dust this time. I’m determined to find a use for it – but more of that soon…