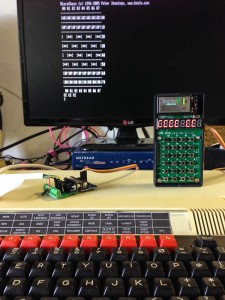 There’s a lot about this picture that makes me happy.

Maybe it’s my age. Maybe it’s some stuff that I’ve been going through. But whatever the cause, I’ve developed a serious retro-computing bug.

I’m going to get into details over a series of posts, but just a quick explanation of what you see here.

In the foreground is a BBC Master Turbo micro. I cut my computing teeth on Beebs. (Yes, I briefly flirted with a Sinclair Spectrum, but I soon realised I needed a real man’s computer.) This is pretty much a recreation of the machine I had back in the mid-1980s.

Sitting on top of it, on the right, is a Kim Uno. This is Oscar Vermeulen’s re-imagining of the legendary KIM 1, the development platform that launched the 6502 processor. You can still get a KIM 1 – just pop over to eBay with a few thousand dollars in your pocket. Or for less than $50, including post, you can buy a kit from Oscar and get an identical experience with modern parts that won’t blow up on you. (It’s based on an Arduino.)

The Kim Uno is running a chess program, and here I’m using the BBC’s Terminal program to talk to it over RS-423 via an RS-232/TTL converter.

In case you’re wondering about the Netgear box, that’s not playing any part in this setup, but it’s also not what it seems. It was an old ISDN router. I ripped out the guts and it now houses a Raspberry Pi. More of that anon.

In fact, more of everything anon. I just wanted to put out a little taster of where this blog is heading. I’m still going to post stuff about my adventures with robotics, the Raspberry Pi, BeagleBone, Arduinos et al, but I also plan to post a bunch of retro stuff for people like me who think that no-one really needs more than eight bits at a time.