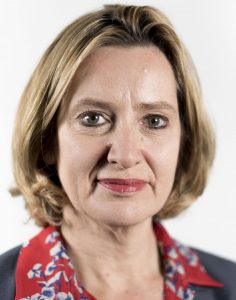 Well, here we go again. A ‘terrorist’ incident occurs and, right on cue, some clueless government minister is trotted out to moan about encryption in popular apps.

This time it’s Amber Rudd, Home Secretary, who has been given the job of displaying just how ignorant politicians are on these matters.

The incident, of course, was the attack by Khalid Masood in Westminster that left four dead (himself included) and many injured, some seriously. It was a vicious assault – one that has been rightly and roundly condemned. So how did the Government respond?

Well, among other things, Rudd was wheeled on to the Andrew Marr show to complain that encryption on the Internet gives terrorists “a place to hide” and that, “We need to make sure that our intelligence services have the ability to get into encrypted situations like WhatsApp”.

Rudd’s position almost certainly comes directly from Prime Minister Theresa May. As Home Secretary she revealed herself to be implacably hostile to individual civil liberties and particularly the security that encryption provides.

There is, of course, a specific problem with WhatsApp and a general problem with allowing intelligence services access to encrypted communications.

The specific problem is that WhatsApp uses the Signal cipher suite which is end-to-end encryption. That means encryption and decryption are carried out on the devices themselves. WhatsApp couldn’t install a back door to the service even if it wanted to, which it almost certainly doesn’t. Any third-party access to messages would involve a complete change of the security model.

The more general problem – as everyone except those in government knows – is that any weakening of encryption to allow access for intelligence agencies fatally undermines the very security for which encryption was employed in the first place.

These arguments have been well rehearsed. But there’s something perhaps more significant going on here.

As well as a profound ignorance of the technical issues, the Rudd-May position is revealing in how it demonstrates a self-importance and parochialism that is  inappropriate in today’s connected world.

At the heart of the Rudd-May viewpoint is an unstated assumption. It goes something like this: “Our law enforcement and security agencies are wonderful, honest and scrupulous and are acting only in the best interests of the country and its citizens”.

Sounds reasonable, doesn’t it? In some ways, I have no issue with that. But let’s pull it apart a little.

Much depends on your view of the authorities. There is a tendency – call it human nature, if you want to be kind – for law enforcement and intelligence agencies to push the limits of their powers. Many would argue that they regularly exceed them. There have been cases, for example, of police forces misusing the Regulation of Investigatory Powers Act (RIPA) to identify the sources for journalists’ stories about police corruption.

So the idea that we should all be happy to let the authorities do whatever they want to do because they’re all nice chaps isn’t going to fly with everyone.

But perhaps the biggest flaw in the argument is contained in the word ‘our’.

If a tech company saves to pressure from the UK Government to provide a back door, which other nation will be knocking on its door next? Even if we’re happy about GCHQ snooping on our WhatsApp messages, what about the NSA? And what about the intelligence agencies of, say,  Russia, China, Turkey, Pakistan or India? Once a tech company concedes the right to snoop to one government it will have a tough time standing up to the others.

And once the back door is installed, it’s just begging to be exploited by non-government actors – ones that don’t have to present even the facade of legitimacy. I’m talking about cyber-criminals, of course.

Clearly, May, Rudd and others like them have failed to think this through. Or maybe they just don’t care. Perhaps both their imagination and their humanity really does stop at the UK border.