Over on Google+, I recently got into a ‘debate’ with another cyclist who took exception to us walking our dogs on the voies vertes. He was ill-mannered and aggressive, and his arguments, if you can call them that, not worth repeating here. But it did get me thinking about cycling spaces and infrastructure.

The ‘rules’ about whether dogs should be on leads on the voies vertes vary from place to place, and generally don’t amount to much more than guidelines (although there are some places where leads are required by by-laws). Unquestionably, dogs are allowed on the voies vertes, so any cyclist using these routes should expect them. (On many days, dogs outnumber cyclists.)

So one’s use of and behaviour on the greenways are dictated more by circumstances and common sense. It’s notable, for example, that the people you see most frequently breaking the rules are cyclists, who are supposed to travel at no more than moderate speed and alert people when coming up behind them. The cyclists who ignore those requirements are, more often than not, members of the Lycra brigade who treat the voies vertes as their own personal race track. Fortunately, that doesn’t happen often.

The point is that my Google+ interlocutor seemed to think that greenways are cycle spaces and that’s an end to it. Dogs are, in his opinion, a menace to cyclists and so should not be on the greenways.

In fact, in addition to cyclists and pedestrians, voies vertes are designated spaces for horse riders, wheelchair users (in one local town there’s an old peoples’ home right by the track) and other non-motorists, such as skateboarders. But we’ve also met wild boar, stone martens, dogs from neighbouring farms and even, one Sunday, a large, extended family using the voie verte as a boules court. No-one seemed to mind – we just dismounted and walked around them as others were doing. Everyone seems to understand that this is a space to be enjoyed. 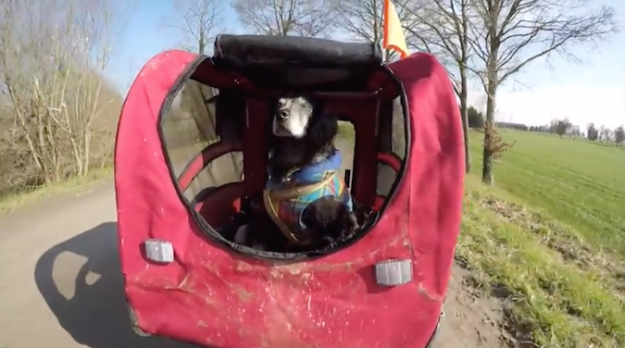 We’re now down to one dog, Cézanne, a psychopathically friendly sprollie who loves everyone he meets. We also used to have an old dog, Zola, who mostly rode the voies vertes in a trailer. Cézanne, though, runs free. But whenever we meet other voie verte users we stop and restrain him until they’ve passed. He’s also on a lead whenever we cross a road.

So I guess it all comes down to who you think the greenways are for.

There’s a fascinating post over on As Easy as Riding a Bike about road design and the competing philosophies towards prioritising traffic, pedestrians and cyclists.

I won’t attempt a synopsis – it’s a complex subject. Nor will I proffer an opinion about the design of urban streets – largely because I don’t care. But the piece does raise a wider point, and one that does concern me. There is a terrible tendency for people to be blinded by their own prejudices. I know that’s a mind-numbingly obvious statement – after all, that’s the very nature of prejudices. And I’m as guilty as anyone. But it does become tiresome after a while.

In the post I referred to, the arguments hinge on who belongs in certain spaces. Pedestrians? Cyclists? Motorists? Does the creation of dedicated infrastructure, such as cycle lanes, destroy this multiple potential by privileging a limited set of users? There’s something bizarrely quantum-like about these arguments – as though a street exists in an undefined (and somehow pure) state before some activist comes along with blue paint and collapses the place’s wave function. And yes, if you read the piece you’ll find that the language being reported isn’t far off being that daft.

Who do the streets belong to? People, that’s who. People who might be pedestrians one moment, cyclists another and motorists at yet another time. I, for one, fill all three roles, though never at the same time. Of course, town planners need to think in terms of hard infrastructure that can’t be changed with the same facility that we humans swap roles. I’ve no idea how these people do their jobs, but I presume that there’s research into how spaces are actually used.

But then the prejudices creep in. And these are the same ones I see popping up in debates over, say, wearing hi-vis clothing and helmets. As much as I love cycling, there’s a very small sub-section of cyclists who can be a real pain in the arse. I suspect it’s because they are doing something so environmentally friendly and healthy that they seem to carry such a sense of entitlement. And this leads them to believe that the rest of the world should bend to their will. It’s a holier than thou attitude that I think is unhelpful when dealing with politicians, town planners and the general population, many of whom might feel equally justified in being opposed to one specific group getting special treatment.

Don’t get me wrong – I’m all for decent cycling infrastructure, such as segregated bike lanes, and believe that cities benefit hugely from encouraging the uptake of cycling. But there are cyclists – just a few – who seem to think that anyone not cycling has somehow failed.

People have all kinds of legitimate reasons for not cycling – such as health, age or (and this is perfectly valid) not wanting to. One of my favourite writers, PJ O’Rourke, has apparently claimed that cycle lanes are an infringement of his human rights as a motorist. I don’t think he’s right, and I suspect he is being deliberately provocative (as is his habit) but you can’t dismiss the point out of hand.

Everyone has a right to public spaces. These rights need to be balanced on a space-by-space basis. And there will be many arguments hinging on issues such as the environment, health and cost. But anyone who assumes that his or her own perspective is proven beyond all argument has wandered off the path of reason.

I personally believe we need a lot more cycle infrastructure than we have now in most cities. But I don’t think we can always assume it is the right thing to do. And we can never demand that others think as we do.

The voies vertes do not serve a single purpose. While certain users are banned (eg, motor cycles & mopeds), the range of users who are allowed on them and actually use them is quite wide. All have certain requirements – runners, for example, prefer not to have to stop for others. So it all comes down ultimately to courtesy, compromise and not feeling like you own the place.