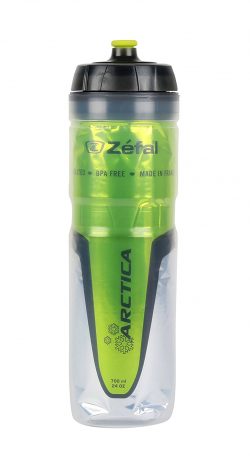 There’s nothing better than a cold drink on a hot day. And vice versa.

Staying hydrated is obviously important. But you also want to feel refreshed on a blazing, dusty summer ride, and comforted with something warm when cycling through the chill of winter.

That’s what led me to the Zéfal Arctica Isotherm water bottle. Its shell is a standard 750mm water bottle with nipple. (I’m sure there’s a more technical term for the pop-up bit you drink through, but let’s be honest about what’s going on here.)

What’s special about this version is that, according to the Amazon description: “Its inner resin with three layers ensures the conservation of heat or cold.”

I bought this water bottle back in the hottest part of summer. Before we set out to ride I did everything I could to ensure I had a cold drink available. The mineral water and fruit syrup both came from the fridge. In fact, so did the Zéfal bottle itself. And for good measure I threw in a handful of ice cubes.

Just before we started cycling I took a sip and confirmed that the water was cold enough to give me one of those instant ‘ice cream headaches’. So far so good. I stuck the bottle in a carrier on the frame.

After about 10-15 minutes I tried again. The temperature was now what scientists define as ‘nicely chilled’. (I think those are probably wine scientists.)

Not long after, the water had risen to a level known as ‘disappointingly tepid’. By 30 minutes into the ride, I couldn’t discern much difference between the water in this bottle and that in an ordinary (and significantly cheaper) bottle I’d been carrying in the pouch of my rack bag.

I continued to use the bottle throughout the summer, but never without a slight sense of betrayal. Certainly, I wasn’t receiving the level of refreshment I’d hoped for.

Now winter’s arrived and it was time to try out the other half of the claim. I’ve no idea what the temperature was today, but it was cold enough that I had to stop after a few minutes to let the tears clear from my eyes and for the grimace to ease from my face.

Before we’d set off, Trish had boiled some water and mixed it with fruit syrup, straight out of the kettle. Trish took her water in a large, insulated cup meant for carrying coffee.

More than half an hour into the ride and my water was still pleasantly hot. Hers was room temperature at best.

The claim made for this water bottle is that the insulation is good for 2.5 hours. I’ve no idea what the parameters are by which you can measure that, but if you expect a hot or cold drink after that period of time I think you’re going to be very disappointed.

That said, it isn’t a disaster. It worked quite well at keeping the water hot in cold weather, and I’d recommend it for that use.

As for cold drinks in summer, I think Zéfal has made a basic design error. The outer plastic is clear. Sunlight falling on the bottle is going to be turned into heat, and I think this might explain its poor performance. When next summer rolls around, I’ll try keeping it in a pannier to see if it works any better. But if you’re listening, Zéfal, why not make the outer plastic opaque white, much like your normal water bottles?