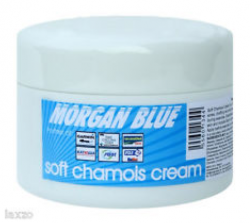 About the same time as I ordered my Second Skin chamois cream, I also ordered this.

Morgan Blue comes in two textures, soft and solid. I plumped for the soft as being water soluble, as I loathe scraping chamois cream off my hands before the start of a ride. This cream got reasonable reviews as a good product for rides under the three-hour mark, which is all I do anyway – I’m not spending all day in the saddle.

Morgan Blue is the favoured brand of the Subaru-MarathonMTB.com Team, apparently, though I’m guessing they use the heavier version.

It came in a generous size of tub for the money (200ml for 10.77 euros on Ebay, with 3.56 shipping). Mind you, this is just as well, as you need more of it – a good three fingers worth (and some recommend you should also apply it to the chamois pad itself). It’s a nice texture, and a very light smell, and does indeed wash off your hands easily. Ingredients include Saint John’s Wort oil, vitamin E, olive oil, sunflower oil and rosemary oil.

For most of my rides, this cream has proved OK, but in summer, around the two-hour mark, I’ve occasionally had to stop and add a bit of Enzo or Second Skin. By the time I get back, it seems to have completely gone (no sign of it on the chamois pad either, which does make washing your shorts a bit easier). So although it’s been good enough, I would say I don’t quite like it as much as the Enzo, which I can feel is still present and protecting my skin at the end of the ride. Also, strangely, I found I missed the tingle of the Enzo, which can be a bit – ahem – refreshing, but at least lets you know where you’ve applied the damn stuff and whether it’s migrated.

So, overall, a good product but not quite thick enough for me. I might try the solid version next year.