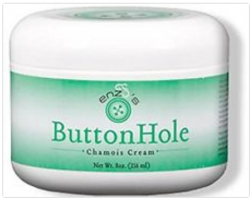 I kind of lucked out with the first chamois cream I ever bought, which just happened to be the first thing I found on Ebay.

Mine cost me about a tenner for 50ml on Ebay, and I went for this little pot, not knowing how much I would use or need.

The texture of the cream is really pleasant – thick enough but not too thick – and I also like it when creams are not too white, as it shows the manufacturer’s haven’t used bleaching ingredients. This cream is quite cream-coloured. But it’s the smell that is the best part – like chocolate mints.

There’s a decided tingle factor with the Enzo, due to the amount of menthol, but I’ve found this very useful for knowing exactly where the cream is, and where it isn’t. The only issue is that if you stop off for a pee, it reactivates itself, which you know all about when you’re crouched behind a bush or a hiding in a maize field.

For every ride I’ve ever done (the longest being about 4 hours) the Enzo has worked perfectly – I haven’t needed to reapply it, and I can still feel it’s there when I get home. As long as I’ve been generous enough with it, I haven’t had an incipient saddle sore, and it’s washed out of my cycling shorts without any problems. The only issue I have with it is that it goes ‘off’ after about a year, which makes sense, given that it’s a fairly natural product. Oh, and it’s stupidly hard to get in Europe.

Enzo Buttonhole Cream is available from various stockists for about $20 for 8oz, but shipping to Europe can easily cost the same amount. The cheapest I’ve found is Planet X at £14.99 for 8oz and about £11 shipping.