Last Sunday we rode down a local voie verte accompanied by our sprollie dog Cézanne. But this time I wasn’t hauling the DoggyHut trailer. And the reason was that our old spaniel Zola is no longer with us. 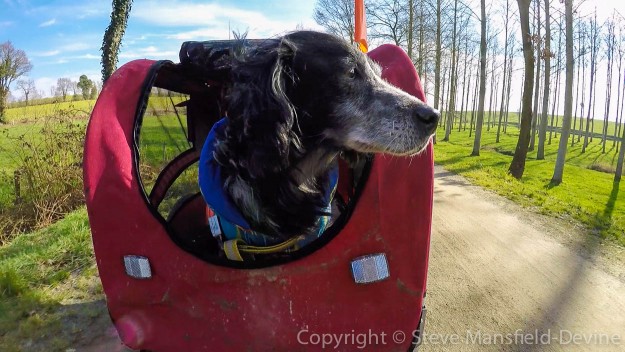 In some ways it was a melancholic ride, but in other ways heartening. Zola was an old boy – three months shy of his 16th birthday. For the past 3½ years we’ve been treating his heart condition. When we bought the bikes – as a way of exercising the tireless Cézanne – it became immediately obvious that we would need some way of taking Zola along. Hence the DoggyHut.

Zola took to the DoggyHut straight away, asserting his rights over it before it had even left the house. And we were delighted to find just how much he loved riding the greenways in it – like a prince in his personal carriage. We’d let him out every now and then to have a little romp. While inside the carriage, he’d constantly scent the air with his amazingly sensitive nose. I even managed to get this on video.

And he liked to play a trick on me. As he ran alongside, he’d slow down and cast glances at the trailer. I’d think, “Oh, he’s tired and wants to go back inside.” So I’d stop, dismount and walk back to open the zipped flap, all the while watched by Zola who, by this time, had also stopped. Then, just as I was crouched down and about to beckon him inside, he’d suddenly take off, running like the wind with his bouncy, old-dog gait, ears flapping, a big grin on his face, to catch up with Trish & Cézanne.

He did this a couple of times just a couple of weeks ago when we rode a section of the voie verte north of Mortain. He was full of enthusiasm up to the end, even when his energy gave out.

Zola finally succumbed to kidney failure and a stroke. We put him to sleep on Friday. The day before, we’d had to do the same for our 22 year-old cat Bembo. It was a tough week.

On Saturday, we walked a section of the Véloscénie voie verte with Cézanne. And the next day we rode the same section and beyond.

It felt oddly dislocating having only the one dog with us. But there was comfort also in encountering other people with their dogs. One couple was riding a tandem with a beautifully woven wicker basket on the rack – home for their cairn terrier. Another couple on bicycles had what looked like a home-made trailer to carry their medium-size dog, which seemed to have at least some border collie in the mix. In both cases, we encountered the couples twice – once with the dog being carried and once with the dog running alongside.

It was a beautiful day, and so the voie verte was as busy as we’ve ever seen it (which means, not very). On average, we probably encountered a runner, walker or cyclist every 20-30 minutes. Naturally, we would stop and hold on to Cézanne while the other greenway users passed. At one point this took a while, as a spread-out group of around 20 people on e-bikes went by. Nearly all of them, I would say, were retirees.

And this is the great thing about the voies vertes. They are a beautiful facility enjoyable by all kinds of people – and dogs. I’m glad we gave Zola that experience.