I haven’t blogged for a while and the reason is an enforced absence from the bike. When I can’t ride, I don’t feel much like writing about it.

The reason I was off the bike was I broke my ribs in a minor accident. Our driveway is very steep and there I was, pedalling along, trying to work out whether my motor was working better after the maintenance the DH had done on the bike (I’m not getting full power until I’m pedalling quite hard). And then I braked for the turn and – no brakes. He’d forgotten to reconnect them.

Quite whose fault this was, was in dispute. Mine, he said, for not checking the brakes were working before I set off. His, I said. But whatever, it was a nasty moment when I realised I was heading down a slope towards the road with no way of slowing the bike down. So I steered onto the verge, which didn’t help much, and the grass grabbed the bike and it went out from under me.

I’m sure we’ve all had what followed next: the pain; the quick check all over; attempting to get up and realising the bike’s on top of you (no fun at all when it weighs 20 kilos); trying to find your glasses (broken) and then then slowly, painfully inching to your feet again. I straightened up my front wheel, which had turned 180 degrees; scraped off the mud; limped back up the driveway; handed the bike over to the DH; and went for a painkiller. Then, like an idiot, I carried on as normal.

To be honest, I was in so much pain with ripped muscles and some gorgeous bruises from the steering column and handlebars that the ribs were the least of my worries. It was only about a week later when my lower leg swelled to twice its normal size (after the whack with the pedal) that I saw a doctor, who confirmed a haematoma and also told me I had at least two broken ribs. Ah…that made sense.

He prescribed no exercise for a month – no swimming, no biking, no yoga. I was cross at first, but given that even turning over in bed, coughing or sneezing were all agony, it was obviously for the best, and I watched the oilseed rape come and flower and die off, all unable to go out and enjoy it. I couldn’t drive either, or clean the house properly, or lift the shopping, so it was several weeks of enforced idleness, made easier on sunny days by long sojourns in the cabin with a series of good books. The dog was very puzzled as to why I wouldn’t throw his ball any more and began bringing me potatoes instead.

Anyway, it’s done with now. It got better all at once, after – as promised – four weeks and now I’m back on the bike, understandably wary at first, but now feeling normal again. I also asked for, and got, some Salmon Koolstops, which are bloody fantastic and stop the bike dead in its tracks. 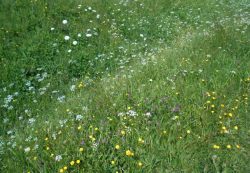 I eased back onto the bike with 10km and 15km rides found it fine. So yesterday I went out and did 22km in the morning, with the air rich with the scents of May blossom and lilac. Everything is incredibly green. The barley is clothing the hills like a thick green pelt and the verges are full of buttercups and marguerites. Then in the afternoon, the DH and I rode together and did another 18km on another route. So, I’m feeling truly fortunate to be living in the countryside right now – most of my biking has been in autumn and winter, but this greenery, this sucking down the fresh air of spring is what it’s all about.