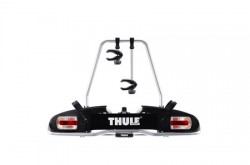 We had always planned to do a significant amount of our riding on greenways, so we knew we’d need some way of getting to the voies vertes. A bike rack for the car was going to be essential.

It quickly became apparent that we were in for an expensive time.

The first rack I looked at cost only €40 or so. And that would have been fine if we’d wanted to carry a couple of kiddies’ mountain bikes. Alas, our e-bikes present a couple of issues.

All the cheaper racks we found were the type that attach to the hatchback door of your car. The bikes hang from them by their top bars, or cross bars if you prefer. But our bikes are Dutch-style – they don’t have cross bars.

That type of rack also typically has a load limit of 30kg, sometimes less. Our bikes weigh 22.5kg each – maybe 20kg with the batteries removed.

And so we moved up the bike rack food chain, did lots of research and reading of reviews, and came away with one name – Thule. It’s a brand we know from other products and which we’ve grown to trust. This turns out to have been justified.

We settled on the Thule EuroPower 916 towbar-mounted bike carrier. It has a load capacity of 60kg, so gives us quite a wide margin. One of our cars is already fitted with a towbar, and the other is likely to get one soon.

We’ve had the Thule for some months now and have used it not just to haul the bikes to the local greenways but also to take them on holiday with us in Brittany. So this review is based on real experience. And that also explains the disgustingly muddy state of the carrier (and our car) in the photos. 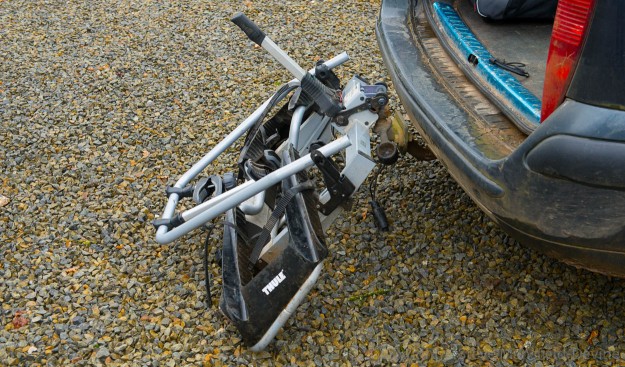 At first, it was something of a fiddle getting the Thule on to the tow hook. The manual says there has to be a minimum of 65mm between the car’s bumper and the centre point of the tow ball. Ours just qualifies, and to make things easier I removed a bit of trim (now put back). Finally, I hit on the trick of using a hand trolley to bring the rack to the car and lowering it so that the rack’s mounting mechanism drops on to the towbar’s ball. The front of the rack rests on the ground. If the rack isn’t at that kind of angle, it simply won’t drop on to the ball. Once learned, though, this trick makes it fast and easy to mount the rack.

The carrier is fixed in place simply by pushing down on an arm, which grips the tow hook. And that’s it. It doesn’t seem possible that you can place up to 80kg (bikes plus carrier) on a platform hanging out from the rear of the towbar simply using something that grips the ball – but there it is. The carrier worked straight out of the box on our towbar; but there is an adjustment mechanism to tighten or loosen its grip on the hook. It was set just a little way up from minimum. Being paranoid, I’ve since tightened it a little – if you adjust it too far, it’s impossible to push down the arm. Once on, you push down a collar that you can then lock, so no-one is going to walk off with your bike rack while you’re off cycling. 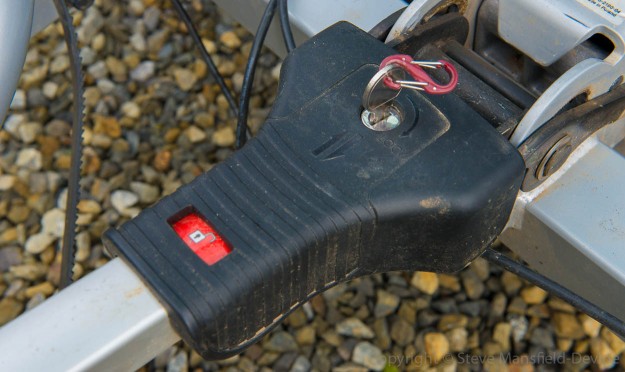 The rear, upright frame folds down for when you want to stow the rack in the back of your car or carry it to your home/garage, but clamps very securely into place when in its working position. 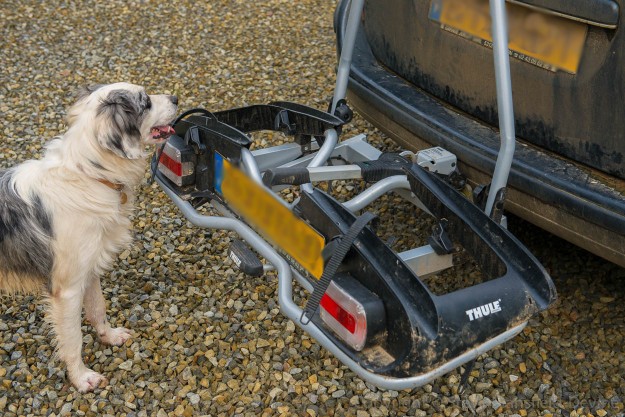 The carrier in position. The sprollie dog is an optional (but highly recommended) extra.

There’s a slot for a number (licence) plate, with two clips supplied to secure it. You’re going to need the plate because your bikes will obscure the one on your car, which isn’t legal. There’s also a standard 7-pin connector for the lights. 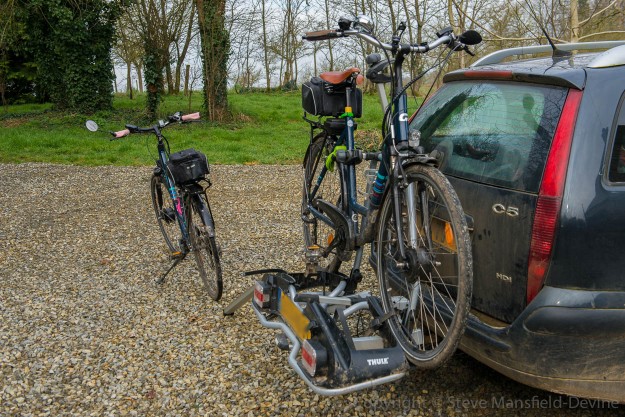 It’s best to put the second bike on backwards.

We’ve found that wheeling the bikes on to the rack does take a little practice. The first bike, closest to the car, tends to snag its pedals on the upright frame, so you need to angle it. You should then put the second bike on backwards, so you don’t have to manoeuvre the handlebars past each other. There’s an optional, and quite expensive, ramp that bridges the gap between carrier and ground. We first assumed we wouldn’t need this; but the e-bikes are heavy, so we bought it and it made a big difference. We’re old and shouldn’t be made to lift things. 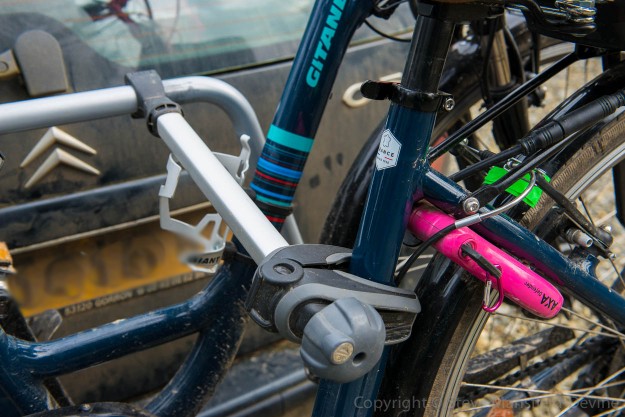 The jaws of death.

There are two arms with clamps (which Trish likes to refer to as the ‘jaws of death’ for some reason). In product videos, these are generally shown being attached to cross bars. But because they rotate, it’s easy to fix them to a seat post instead, so the whole thing works fine with Dutch-style bikes. The knurled wheel used to tighten/loosen the jaws is lockable. It’s the same kind of small wafer lock as used for the attachment arm. It’s not exactly high security – speaking as an amateur lock-picker, I could probably have these locks open in a couple of minutes with the right pick. But they’re enough to defeat all but professional thieves. And you could always use a chain or cable lock as additional protection if you think you’re going to leave the bikes unattended on the car for some time. In fact, on a recent trip to Brittany, we did just this, locking the bikes using a cable running from the cars roof bars to the Axa lock on the rearmost bike via the other bike’s frame & rear wheel.

You can remove the arms (for example, if you want to carry only one bike). To do this, you open the jaws very wide, at which point you can pull down the sleeve of the arm to release the mechanism where the arm attaches to the upright frame. This is a clever system because it means that when the jaws are clamped on to a bike and locked, you can’t move this sleeve, effectively locking the arm to the carrier.

You can also slide these arms to any point on the upright frame, including the vertical sections, so you should be able to affix pretty much any kind of bicycle to this rack. 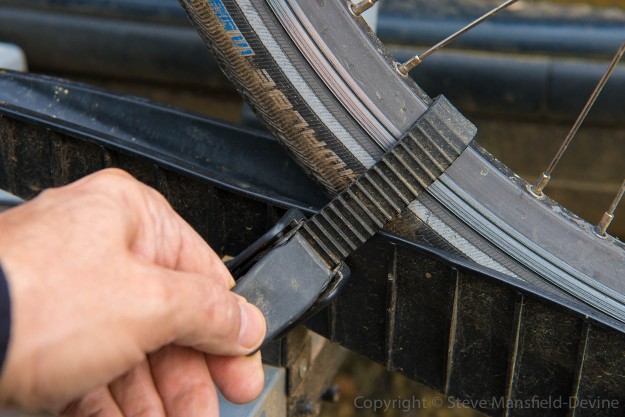 You also secure the bikes using straps that go through each wheel and tighten against the rim. To put these on, you thread the strap through a receiver, then tighten using a lever. It takes just a few seconds and is very secure. To remove, press down on the lever and pull out the strap. It couldn’t be simpler, although when positioning the straps you might find you need to turn the wheel slightly if you want to ensure you don’t put any pressure on a spoke. 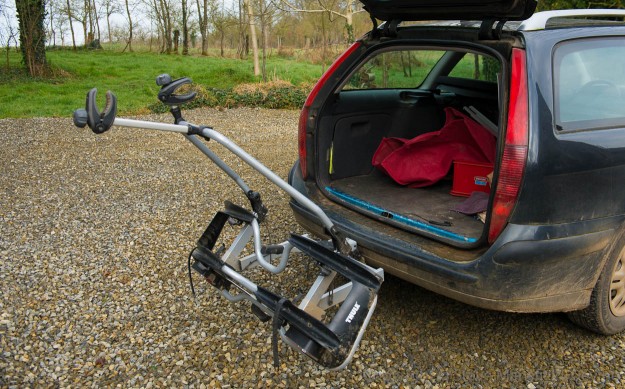 Tilt mechanism for accessing the rear of the car.

Inevitably, once the bikes are firmly fixed in place, you realise you forgot to put your panniers in the back of the car. No problem. Just put your foot on a small plate just under the number plate holder and rock the rear frame. The whole thing then hinges forward enough for you to be able to open the rear door of a hatchback or estate (works fine with our Citroen C5 estate). When you’re done, just push back into position – it locks back with a reassuringly solid clunk.

The built quality of the Thule EuroPower 916 is superb. And its design is clever – it has the feel of something created by cyclists, in that it is fast to use but inspires confidence in its ability to keep your treasured rides secure. 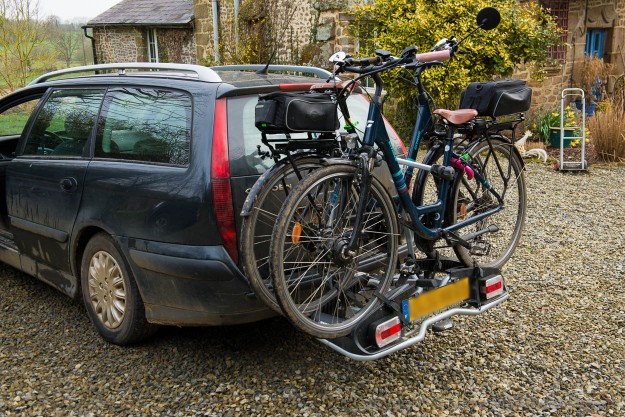 My one niggle is that the knurled wheels on the jaws of death have too fine a thread – you need to turn them a lot to get them firmly fixed or open again. Not only does this waste time, it’s also a little painful if you have arthritic hands like mine. I assume the fineness of the thread is a security measure, to reduce the likelihood of the grip loosening under vibration. But still…

With a little practice, loading the bikes – including mounting the carrier on the car – takes about maybe 10 minutes. And once you’re out and about, getting the bikes on and off the car is a doddle – something we greatly appreciated on a recent ride where we unexpectedly had to use the carrier more than planned.

While the Thule EuroPower 916 is far from cheap (we paid around £500), you have to ask how much you value your bikes. We’ve used this carrying heavy bikes over rough roads and long journeys and now barely think about it. Given how greatly we treasure our e-bikes, that’s praise indeed.