It’s been a while since we hit the voie verte, other than a stroll some weeks back without (gasp!) the bikes. 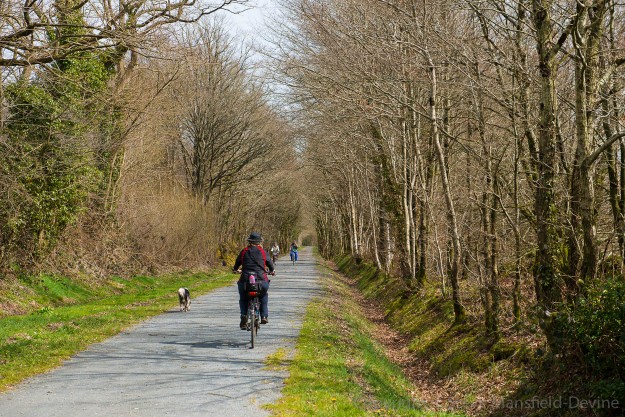 So it was great to be out on the trail again, on such a fantastic spring day and also on a stretch of voie verte we’ve not ridden before.

There’s a Eurovélo route (marked EV4 provisoire on my map) that runs south from the D-Day beaches in the Calvados département of Normandy and joins the east-west V40 Véloscénie route that stretches from Paris to Mont St Michel. It parallels the main EV4 coastal route.

The southern half of the EV4 provisoire is all on voies vertes, using former railway lines. It hooks up with the Véloscénie just south of Mortain, which is 30 mins by car from us and a place where we often meet friends for lunch. 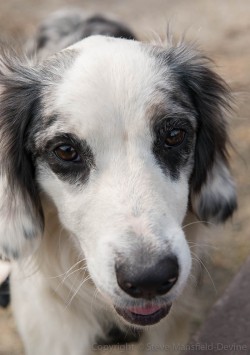 Not to be trusted with cars.

Things didn’t get off to an inspiring start. We weren’t sure where we should pick up the track, so pootled around the outskirts of Mortain until we found the voie verte and a handy place to park. But then, after a bit of confusion as to where the track ran and a very short ride, we realised that the voie verte was little more than a rough, narrow footpath alongside a road.

That would have been fine if it had been just us on bikes. And it would have been okay if we’d just had our old dog Zola, who was riding in his carriage. But we also had our young ‘un, Cézanne, who is … how shall I put this? … not to be trusted with cars.

I pushed down the track towing Zola. Trish took Cézanne back to the car, loaded up her bike and we met up at a point where the bike path and road appeared to diverge, with the voie verte veering off into a beautiful bit of woodland. This was at a picnic spot known as the Rocher d’Aguille (Needle Rock). As pretty as this was, it provided only a temporary respite from the road, as the bike track rejoined it almost immediately. 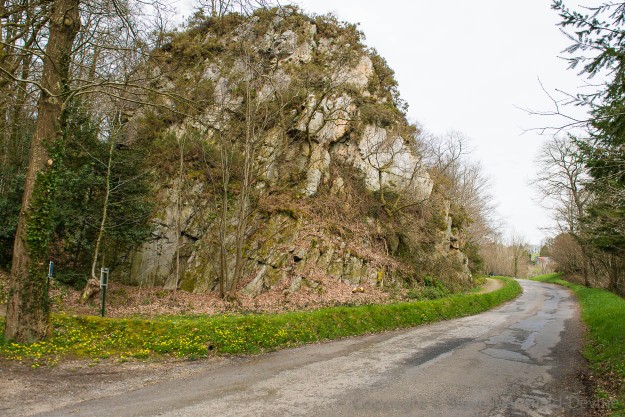 Rocher d’Aguille, where the bike route is just a narrow path next to the road.

Trish headed off on her bike to reconnoiter the path ahead and was soon back to announce that things got better a little way down the track. This time we put Cézanne in the Doggyhut and I took him to another picnic spot while Trish pushed her bike, walking with the more sedate Zola. Then I rode back to the car, loaded up the bike and drove to our new base camp.

Over a picnic lunch, I considered the lessons I’d already learned that day. First, when studying a map to decide on a route to cycle, be suspicious of any bits of greenway that closely parallel roads. It was clear that, on this stretch, the old railway line had been converted to a road and the bike path was something of an afterthought. And a very rough one in places.

The other lesson was just how brilliant our Thule bike carrier is (review coming very soon). Getting the bikes on and off is very fast and easy. I think the day would have been ruined without it.

And so off we set on the ride proper. And we soon found a magnificent building, the former Mortain-Le-Neufbourg station, now sadly dilapidated. It sits in a large open space that was once, I presume, filled with railway sidings (there’s gravel everywhere). If only we had money… 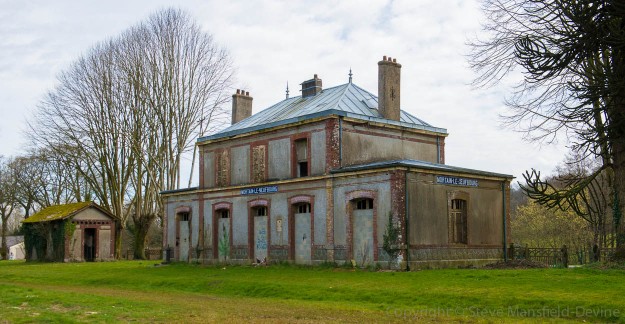 The area was scattered with other reminders of its former function, too. 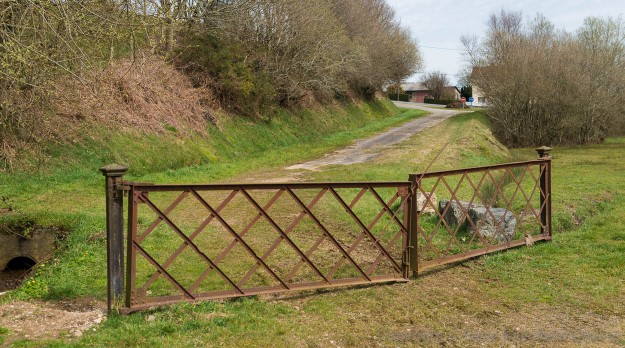 A little further on and the track becomes delightfully woody, often crossing streams and rivers. Mortain sits atop a hill overlooking a deep gorge — which is where, naturally, the railway formerly ran. 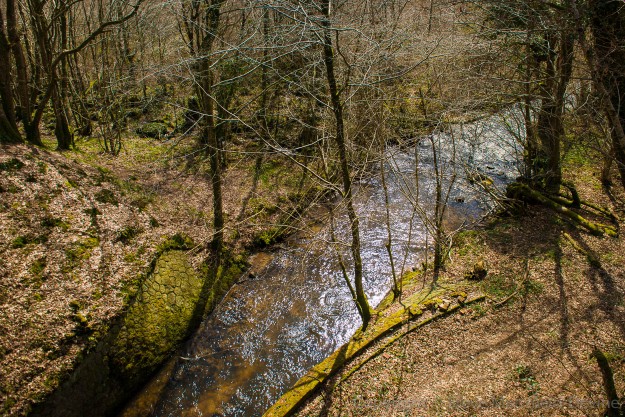 We could feel we were climbing. The electric assist from the e-bikes makes life easier but it doesn’t inure you from the environment. You still feel hills, even ones as gradual as you typically find on old railway lines.

And the great thing about riding the voies vertes on bikes, as opposed to walking, is that you cover a lot of ground, so that you get to appreciate changes in landscape. The heavy woodland and rocky escarpments soon gave way to gentler landscapes. When we stopped to take the following picture, we saw a deer bounding across the fields. 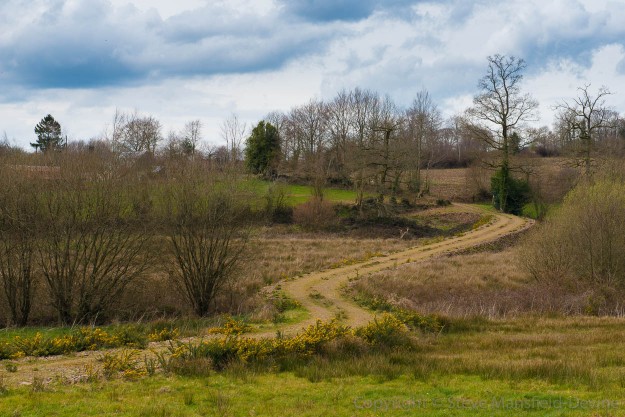 You can see the clouds already building. Contrary to the weather forecast, the day started sunny. But at times, the skies turned decidedly ominous.

By now, the voie verte was high on the side of a ridge. To our right, through the lining of trees, we could glimpse views of the valley.

And the suddenly the trees cleared and we were treated to a magnificent vista. 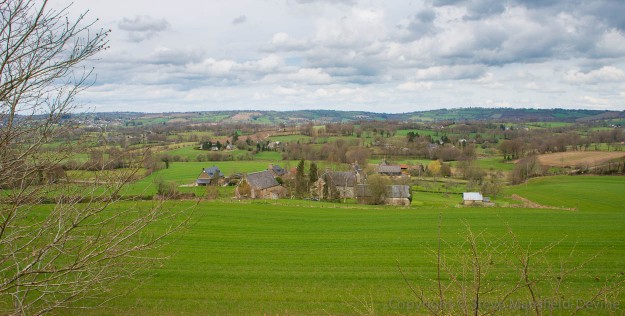 Next time we ride this route we’ll join it at the Mortain-Le-Neufbourg station. There’s 20-odd kilometres of unbroken greenway running up to Vire. And having mentioned the station again, that’s an excuse to have another look at it. 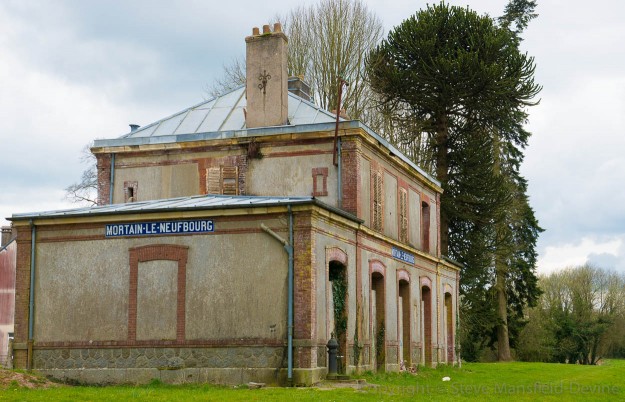 I’d love to turn it into a studio and art gallery. Oh well, dream on…

1 thought on “Back on the tracks”