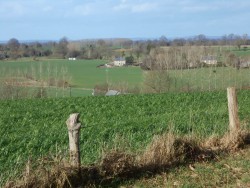 Had a brilliant cycle ride on Sunday – my longest yet, at 33km. The weather was crisp and cold – about 6 degrees and sunny. In the morning we walked the dogs around a local lake, cancelling our planned longer hike as I had an upset tummy and was feeling filletted. But the walk made me feel a lot better, so after lunch I decided to head out on the bike.

I had no plans, other than pastures new, so headed for the floral village of St Fraimbault, and then up an unknown road to Soucé, then took the road towards Ceaucé. 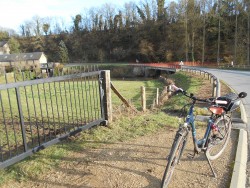 Outside Soucé, the road sweeps downwards and over the barrage – a fun 46kmph curving descent, delightful with the water roaring away after all the recent rain. On the other side, after a kilometre or so, I saw a green cycling sign, and some cyclist had pinned up a sheet of A4 saying Vélo Francette 2.8km (bang-up signage there, Vélo Francette…). 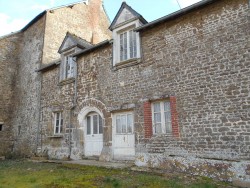 I turned down this absolutely tiny lane, which wandered off again into the arse end of nowhere. It was so narrow I was convinced I was about to end up in someone’s farmyard, but instead it took me past this gorgeous derelict(?) manoir. No-one around (in my two-hour ride I only passed about five vehicles, though one was a white van that came far too close). I stopped here not only to take photographs but also to add a second microfibre balaclava under my fleece one, as the wind was glacial. 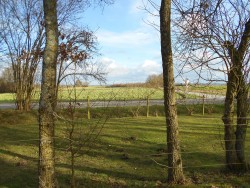 The Vélo Francette itself appeared a little later and I turned onto the voie verte, where I was more sheltered from the strong gusts (a good 55kmph and always either in my face or to the side). I was well into unknown territory by now, though I had my map in my rackbag, but I figured that if the worst came to the worst and I missed the turning that must be up there somewhere, I’d just end up at Ambrières, whence I could find my way back. To the left must be Ceaucé, but the main road is a fast one and I’d rather avoid it. 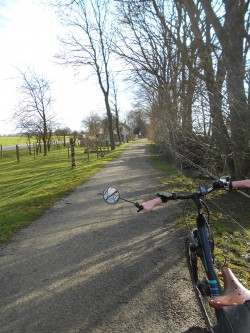 I was clocking up the kilometres by now but still not feeling tired (thank you e-bike) and my battery life had only dropped by a quarter, so I had no need yet of the chocolate drops in my rear pocket. The greenway was entirely empty for the time I was on it, other than one older woman who passed me on foot and I had a twinge of nervousness about having a breakdown. But I could see fast-moving cars in the distance and figured that when the main road came parallel to the greenway I would be nearly at the old station house that was my marker to turn right. 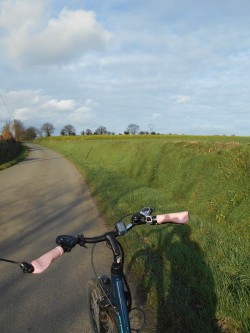 Thankfully, I recognised it when it came up, and I turned up the winding country lane that eventually runs past my friend Sophie’s house. It’s strange how different things look when you’re on a bike, though – you notice much more when you’re pedalling past it at 18kmph rather than doing 90. There’s some lovely architecture up there, and beautiful gardens surrounding the old stone houses. You can’t really tell in this photo, but here the banks of the old bocage are a good seven feet high, which provides some nice shelter from the wind.

After some time I arrived back at Soucé and took the barrage descent again – rather slower on the blind, tight side of the curve, then up to the village of Couesmes-Vaucé via the steep hill past the vicarage and home. I’d been gone about two hours and the DH was starting to worry a little, as that’s twice the length of my normal ride and I don’t carry a mobile phone.

The bike performed perfectly and I still only got down to two bars on the battery, despite using third-level assist on the steeper hills and second-level assist the rest of the time.

I can’t tell you how much I love this bike. Pedalling along, togged up nicely against the wind, sniffing the sweet honey scent of the oil-seed rape, with the sun on my face was perfect happiness. Nothing, not even swimming, comes close to the feeling of wellbeing I am getting from cycling. Best money we’ve ever spent.

1 thought on “A sunny Sunday ride”