We’d meant to go cycling on Christmas Day. Or Boxing Day. But the weather gods had other ideas. And so the New Year came and I was itching to try out my new GoPro (thanks, Santa). Finally, half-way into January, we headed off to ride the Vélo Francette from Domfront.

We’ve ridden this route before, although I was on my old, rusty Peugeot then. This time we’d go a little further, making the entire journey, there and back, 16km. It took four hours!

Okay, so there was the time it took us to drive to and from the starting point. That probably eat up 30 mins. And there was the time I wasted trying to mount the GoPro on the bike. Pro tip: work out how to mount stuff the day before you go riding. I gave up eventually, so you’ll have to wait a while for the first video of Zola riding in his carriage. 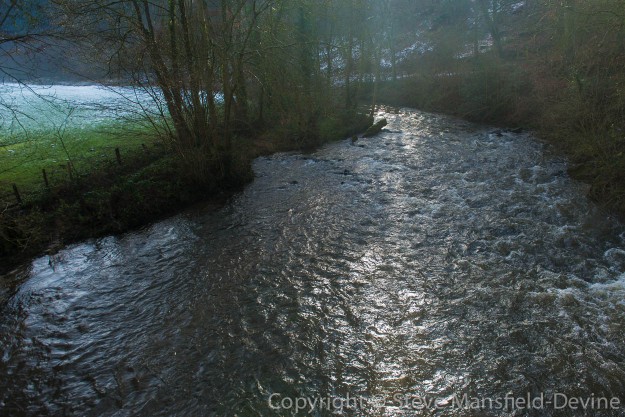 The air was crisp and slightly misty. In many places, the light covering of snow we’d had a few days earlier was still on the ground. 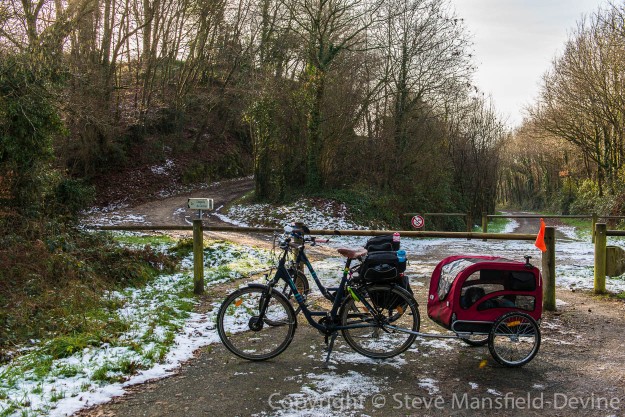 The surface was not as much of a problem as I’d feared. There were patches of ice, slush and mud that had to be avoided or carefully negotiated, but they were few. Mainly, the track was dry and clear. There were still patches of acorn shells, though.

I thought we’d have the voie verte to ourselves, this being January. But it was also a gloriously sunny Sunday, so we had lots of company. Mostly it was people on bikes. But there were quite a few strolling pedestrians, including one or two women far too chic and neatly dressed for this muddy greenway. 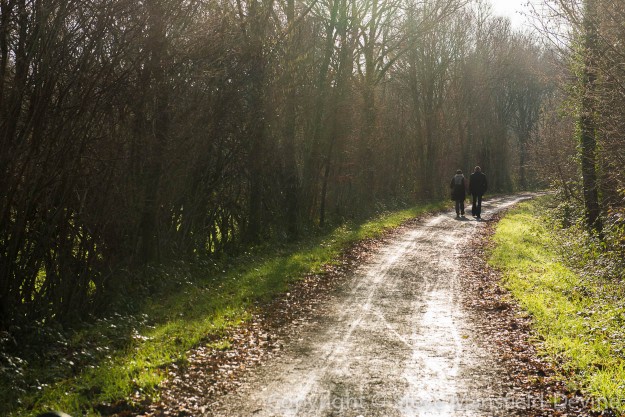 As usual, Cézanne ran free, while Zola spent much of the ride in the DoggyHut. We had to stop constantly to restrain Cézanne when we met other users of the route – hence the very slow average speed. (When he runs, it’s usually at a steady 17-18km/h, as clocked by our bike computers.)

Cyclists are almost always grateful for the way we hold on to the dog. But the pedestrians generally have a different reaction. Adoration. For the dog. One young woman made the mistake of throwing a stick for him. Cézanne’s a little bit OCD about sticks (and normally we don’t encourage their use as toys because there are risks). If you throw a stick once, you have a job for life. But, in the end, when we parted company, I’m not sure who was more disappointed – Cézanne or the woman. 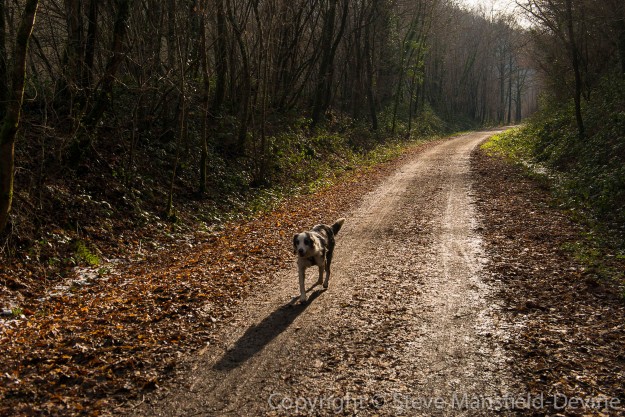 Zola, meanwhile, was lording it over us in his carriage. When we stopped at the turn-back point, for a few quick snacks, he opted to stay in the DoggyHut. It’s not altogether surprising. Trish had put a hot water bottle under the sheepskin. 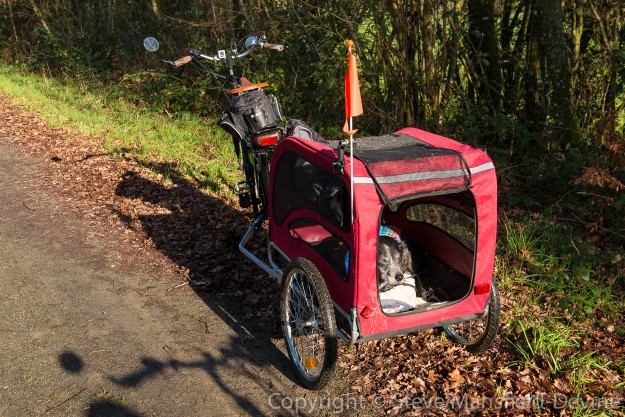 Zola takes luncheon in his carriage.

At times the light was dazzling. On the journey back, Trish wore her sunglasses for the first time while riding. In places, though, the light was subtle and delicate. 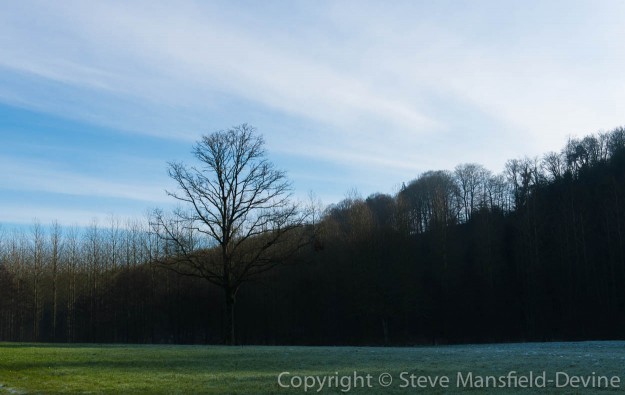 Along the Vélo Francette there are many opportunities for diversions. There’s a footpath that crosses it, heading off to the famous spa town of Bagnoles de l’Orne via a charming little bridge (which Zola explored). 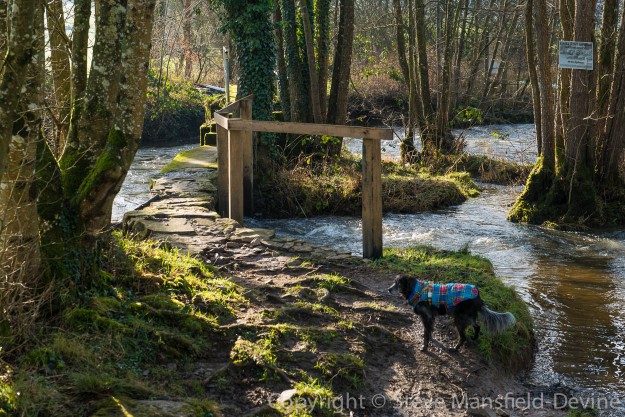 That’s definitely not suitable for bikes – well, not our sort of bikes. But there are other tracks that simply beg you to follow them. 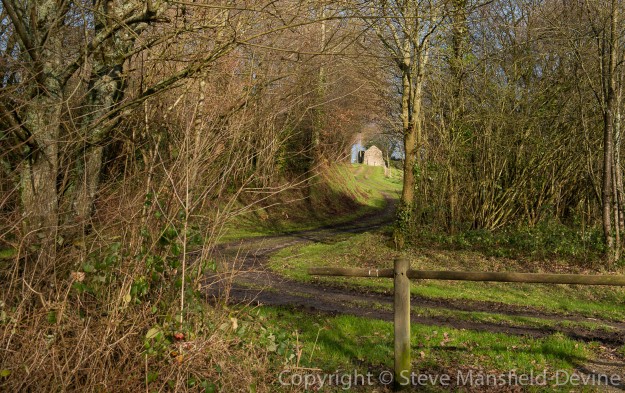 I’ve always been fascinated by paths and tracks – I’m drawn to them. And this route offers many glimpses of other things asking to be discovered. 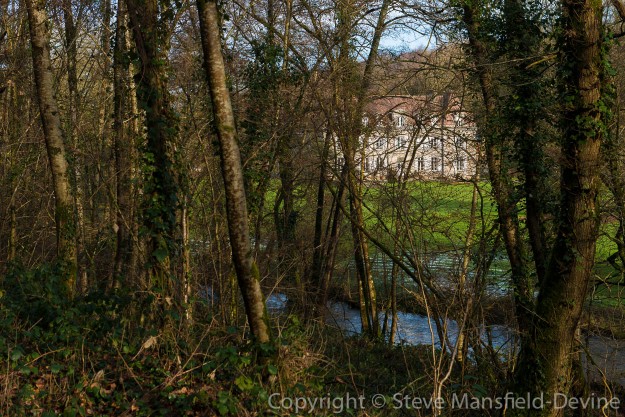 We’re lucky to have many kilometres of voie verte in easy striking distance of home. So far, the Vélo Francette has to be the most beautiful. I have a hunch we’ll be riding this route a lot.

We’d intended to ride before lunch, but wound up getting home mid-afternoon. Trish had put a casserole in the slow cooker before we left and the wood burner was still lit. We piled on more wood, cranked up the heat, settled down with a piping hot meal and watched a Bond movie. Perfect Sunday.