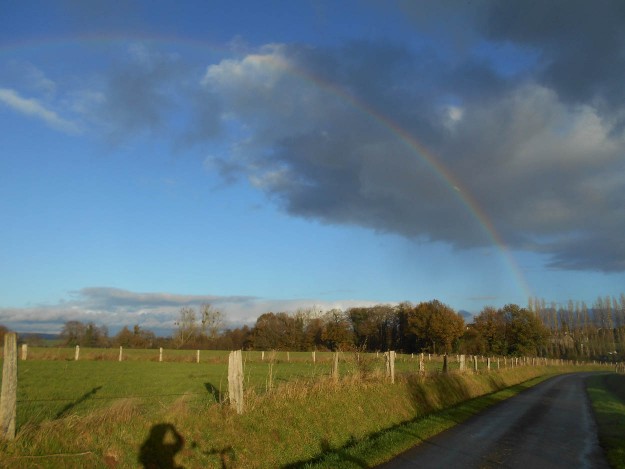 Enforced hiatus notwithstanding, cycling this autumn and winter has not so far been as difficult as I thought it would be. The weather’s been stupidly mild so the roads haven’t been icy, and my morning has fallen into a routine of get up, have breakfast, put lunch in the slow cooker, work/housework/etc till 11.00, then ride for an hour and come back and eat.

We’ve had some spectacularly beautiful skies, some nice frosts, and despite Normandy’s reputation for rain, only once have I really gotten wet (mind you, on that occasion I was soaked to the skin and had to remove absolutely everything, including my sneakers and socks). There always seems to be enough of a break in the weather to get out for at least a while.

I have three or four main routes, usually with a few hills for interest (and because I enjoy the speed of the descent) and a couple of times a week, I try to explore somewhere new. With my map in my rackbag, I’m not too worried about getting lost – if you keep heading for higher ground, you’re bound to find a village at some point and from there you can make your way home. So far, I haven’t run out of battery, and I’m reasonably confident of being able to eke it out if it gets a bit low.

It’s also notably pretty round about here, this year and the other day, I found one of the reasons.

As I was out in my neighbour’s field, throwing a ball for the dogs, his dad came over the hilltop with a scythe on his back like the Angel of Death, and I asked about the peafield, whether it was a green manure crop.

It’s gone over now, but was planted so late that it could never have fruited, though it did serve very well to entirely hide the local deer, two of which went leaping out in front of me when I was walking the dogs – they’d been so close I could have touched them but I had no idea they were there.

The reason for the peas, I was told, is not my neighbor being eco friendly, but a new government ordnance – no bare fields. It’s to prevent fertiliser run-off into the water table, so all the fields have been planted up over winter – with grass, with rapeseed – or the spilled seed left to come up. There’s been a glut of maize, too, so much of that has been left standing this year, for the first time that I can remember. 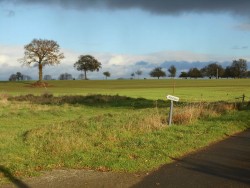 This, for the passing cyclist, has the unexpected bonus of seriously beautifying the landscape. Although the bare chocolate brown fields aren’t without their own kind of beauty, it’s been lovely this past few weeks to pass rapeseed in flower, fields of spent sunflowers nodding their heads and the brilliant green of the winter wheat and oats coming up.

The air is full of the scent of flowers. A couple of week ago, I kept pace with a flock of goldfinches gleaning the fields, and there are starlings, fieldfares and lapwings everywhere. When combined with some of the amazing skies we’ve had recently, it’s been beautiful to behold.