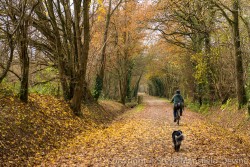 Well, it had to happen sometime…

Last Sunday, we decided to take the boys for a ride down the voie verte. We strapped on our panniers, loaded the Doggyhut, got Zola into his coat, and made sure we had snacks and drinks and dog treats.

We headed for the usual parking space, only to find that the voie was closed for fauchage (reaping), so we drove about another 7km to come back on ourselves the other way. Here, everything was fine, so we unloaded the bikes, got out the dogs – and that was when we discovered we’d forgotten the batteries. Oops.

Steve was all for heading home to get them, but it was already 4.00pm and we were losing the light, so we decided to leave the Doggyhut in the car and just do a short ride up the voie as far as Zola could manage, with the idea that we might swing by home and then head for one of the other voies, but without the dogs.

The unexpected bonus of having to change our route was that we were now on the uphill section, which meant we’d be coming back on the downhill. Although these things are slight on what is an old railway line, you still know about it.

When you ride an e-bike, you can get into the habit of kidding yourself that you’re fit, rather than the fat middle-aged git you really are. You have no such illusions without the batteries. At 20kg even without my stuffed rackbag, the bike was heavy and combined with its very low gearing, I started in 3rd gear and was pretty soon puffing along in 1st.

A bit of momentum might have helped, but I couldn’t go too fast for fear of Zola running too hard after me. Cézanne can run for ages at 15-16kmph, but with Zola’s old ticker, you have to keep it down to more like 7 or 8, which is pretty hard going.

Still, it was a lovely day, and the neatly trimmed voie was looking gorgeous as usual. Zola, to our surprise, was very full of beans and at times he did indeed get up to a 15kmph gallop, though he does need a good rest in between the fast sections. So we rested up a lot and let them have snacks and a swim in the river a couple of times.

All in all, it took about 90 minutes to do the full 5km, though we were a bit faster on the return journey. Pedalling on the flat, or on a slight decline, the bike was fantastic, rolling smoothly and cleanly along on its massive wheels. And that’s another thing that makes me happier about the idea of a battery failure, God forbid, when I’m out and about – the thing, after all, and slug that it is, is still a bike.