When describing to friends what it’s like riding e-bikes, the phrase “it’s like the world is flat” keeps coming to mind. And yet it’s not true. It’s much better than that. 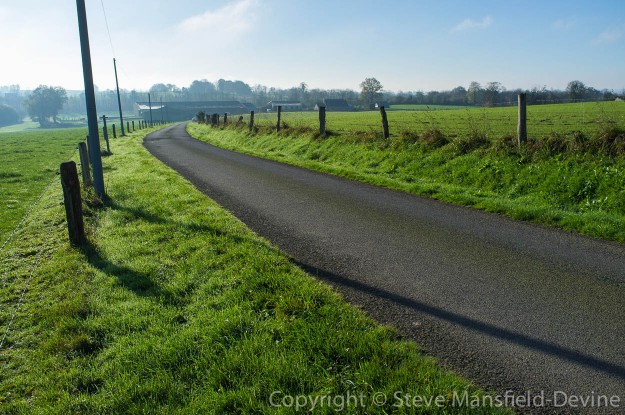 “Hills just don’t exist,” we keep saying. But they do. On steep upward inclines, you still have to work, even on an electric bike. Sometimes you have to pedal so hard that it’s difficult to maintain a conversation at the same time. We’ve occasionally dropped as low as 10kph on some of the hills around here.

It’s true that there are upward slopes that you just don’t notice. And today, while ascending a slope on the last section of our 18km pootle around the countryside, I found that I was getting too close to Trish and had to freewheel. Uphill. (Note: You can cheat with these bikes by pedalling slightly too slow to actually be doing any work, but fast enough to get the motor to kick in. On an up slope, this won’t work for more than a couple of seconds, but it’s enough to catch your breath.)

So, yes, even on an e-bike you still get a gentle workout if there are hills around. Luckily, our Gitane Organ e-bikes are low-geared – annoyingly so at times. (The More Significant Other, it turns out, is a bit of a speed freak and gets frustrated when she runs out of gears. I should have seen that coming – I’ve seen her drive.)

But the thing is, although many upward slopes disappear, you still get all the fun of going downhill. On an e-bike you exist in a kind of MC Escher world where all the roads descend. There’s no puffing and panting upwards just to enjoy the thrill of being five years old again as you hurtle back down. What cyclist doesn’t want to live in that world.