Sometimes you look out at the sky and think, ‘nah, I’ll skip it today, it’s too grey’. As someone who has dedicated his life to the pursuit of idleness, I find this kind of argument highly persuasive. Today was an example of why I shouldn’t.

We decided to ride one of our favourite sections of the Veloscénie voie verte – one we’ve walked many times and cycled a few times. We chose the greenway so that we could take the dogs.

The ride started under lowering grey skies, and stayed that way much of the time.

The voie verte itself looked very different from the last time we rode it. There’s been a lot of maintenance of the verges, with the grass clipped to within an inch of its life, much bramble hacked back and even some trees felled. It’s a drastic ‘short back and sides’ for the greenway, but encouraging to see how well it’s being maintained. 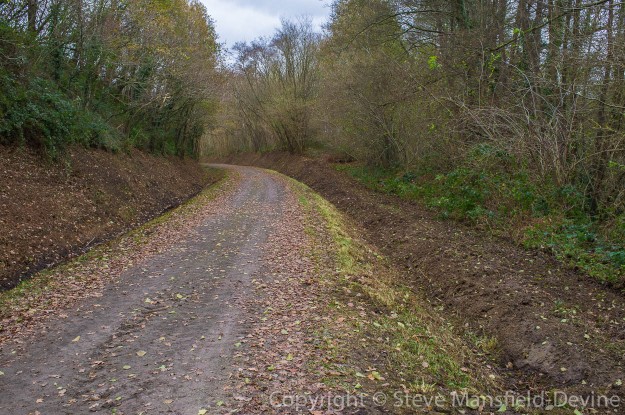 Elsewhere though, the track was just as verdant and tunnel-like as always. And with this autumn’s stupendous leaf fall and persisting carpets of acorns, there were sections that required careful riding. 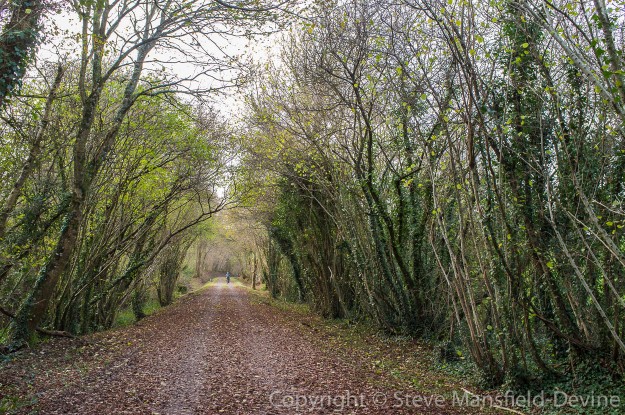 Cézanne was delighted by the sections of the route bordered by maize fields because corn cobs are his favourite toys, bar none. 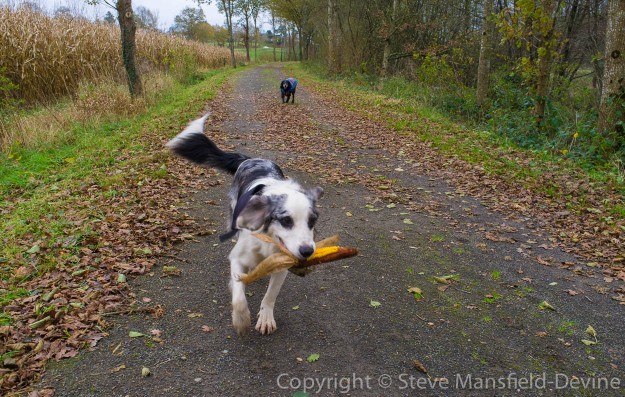 Zola, meanwhile, spent much of the ride looking imperious in his barouche box. 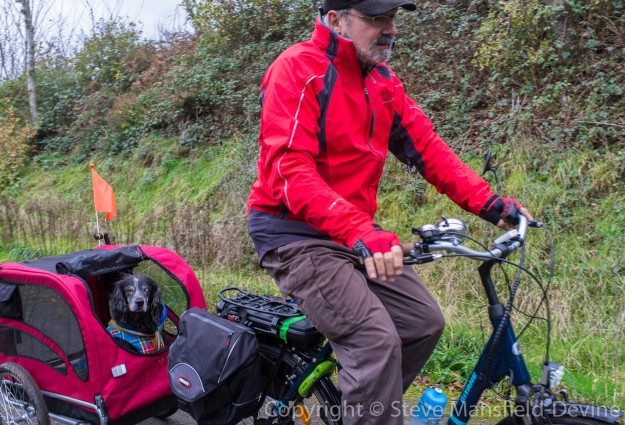 He ran some of the way – and when I say ran, I mean belted along, ears flapping with all the youthful abandon of a puppy. (That is, a puppy who knows that the second he gets tired he can just climb into an awaiting carriage.)

Along the exposed sections of the voie verte the wind really howled. It wasn’t especially cold – about 11°C – but the wind chill made for rosy cheeks and frozen knuckles. There was the odd splash of icy rain, too. But on the rare occasion that the sun tried to poke through, the light was limpid.

We rode about 7.5km along the voie verte before turning back, so 15km altogether. It took about two hours because of constant stops and slow-downs for the dogs. As is our habit, we restrained them when we met the three other users of the voie verte  – a couple walking their labrador and another cyclist. There were road crossings, requiring Cézanne to be on a lead and Zola in the dog trailer. And on the return journey, Cézanne really started to slow down. We reckoned that, with his excursions into the maize and rape seed fields, he’d run at least 20km.

As we neared the point where we’d left the car, at the Barenton – Le Teilleul station houses, the clouds parted a little and blue sky appeared. 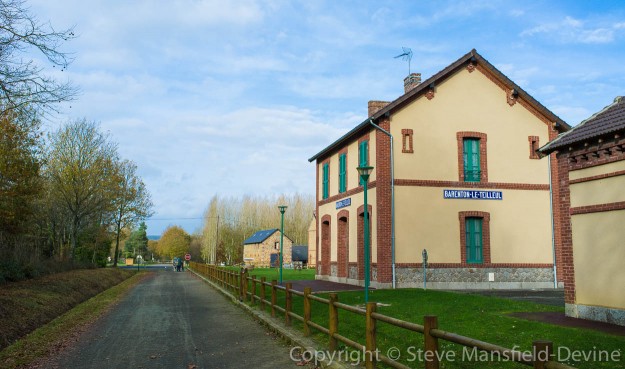 I started to wonder if we’d chosen the wrong part of the day to ride. As it turned out, the clouds came in again soon after.

And the fact is, there’s really no wrong time of the day to cycle. It was bracing at times, to be sure. But never less than exhilarating. Which is why I shouldn’t let grey skies put me off.