November is our favourite month for visiting Brittany. The tourists are out of the way, the dogs are allowed on the beaches, and this year there was an added dimension – our bikes. 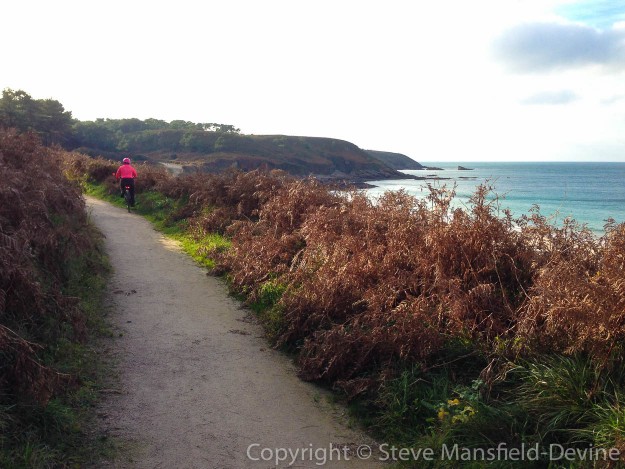 We hadn’t planned to take the bikes. With two dogs, only one dog trailer and (as far as we knew) not much in the way of voies vertes in the area we were staying, we couldn’t foresee the bikes getting much use. As the day came close, however, Trish decided she wouldn’t be able to go a whole week without riding. So on went the bike rack to the back of the C5 and on went the bikes. We were so glad we did that.

We stayed in a gîte near the port of Erquy, in the Breton département of the Côtes-d’Armor. It’s a coastline famed for its pink granite. And indeed, the rocks, the houses, the paths and even the roads have a warm, magenta glow, as though perennially bathed in the light of a setting sun.

In the cottage was a map of local footpaths and – wouldn’t you know it – cycle paths. It turns out the V45 ‘La Littorale’ cycle route, which takes in much of the Brittany coastline, runs just south of where we were staying (green and orange route in the map below). More importantly, there’s a small diversion up to the Cap d’Erquy headland that, it seemed, came almost past our door. 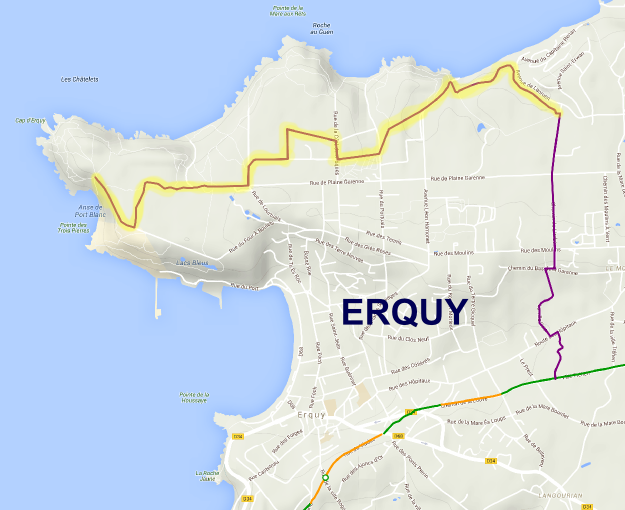 I jumped on my bike, told Trish I’d check it out, and two minutes later was looking at this. 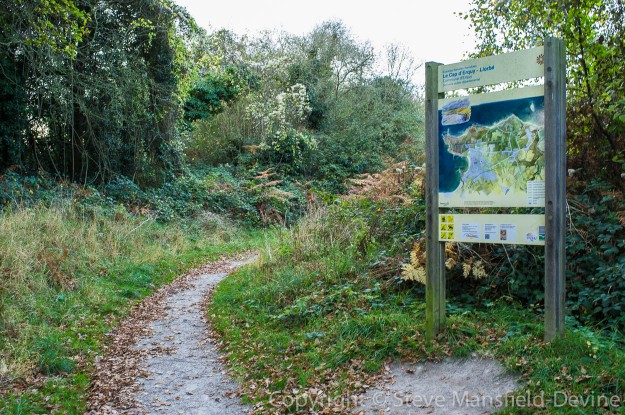 This is the start of a fantastic ride. In the map above, the section we rode is the route highlighted with yellow. The picture above was taken at the start of that section, towards the right of the map. The purple north-south section not highlighted is technically part of the V45, and we did later ride a short part of it, but it was rough and open to motor traffic, so not a lot of fun. The part we did ride, however, was spectacular.

This route was opened two years ago. And it’s part of Le Tour de Manche. The greenway is for pedestrians and cyclists, but with priority given to the former on most sections. Indeed, the barriers that prevent cars from entering the tracks are designed in such a way that it’s difficult to cycle through them – all but the most adept mountain-bikers will have to get off and push.

From our starting point above, the track is a narrow one through thick woodland. Soon, though, you hit the shoreline, which you follow for a short way. 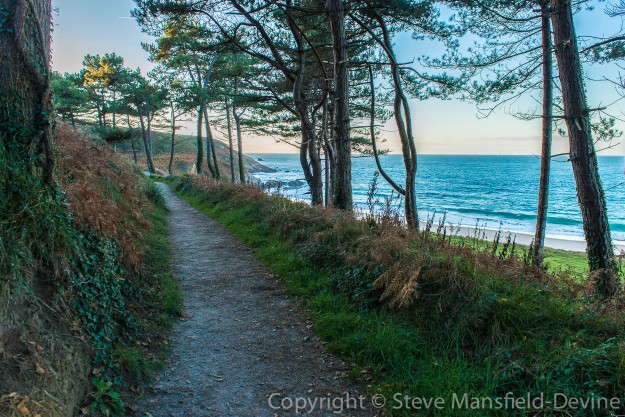 The route then heads inland again, through more forest. 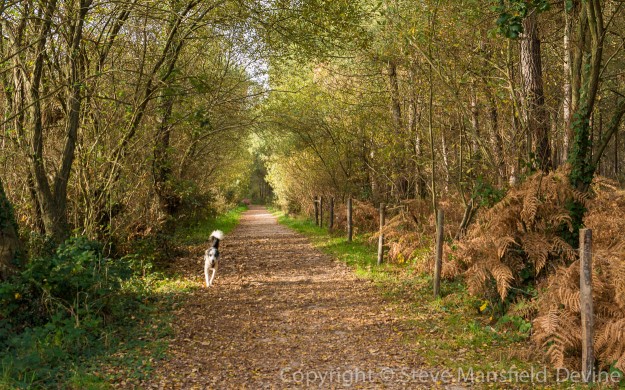 Eventually, you emerge on to wind-blown heathland, thick in gorse and heather. 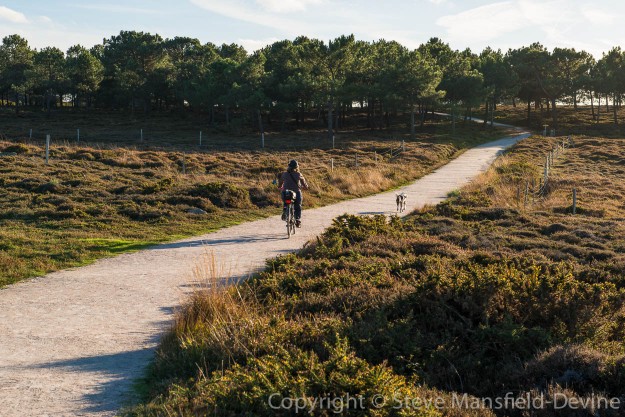 As you can see, the track is quite wide in places, and well-maintained. It’s popular with pedestrians and cyclists. Quite a number of the walkers had dogs with them, mostly not on leads. And given that pedestrians have priority, gentle cycling, a willingness to stop and give way and a smile go a long way. Without exception, everyone we met on this route was accommodating, polite and friendly. 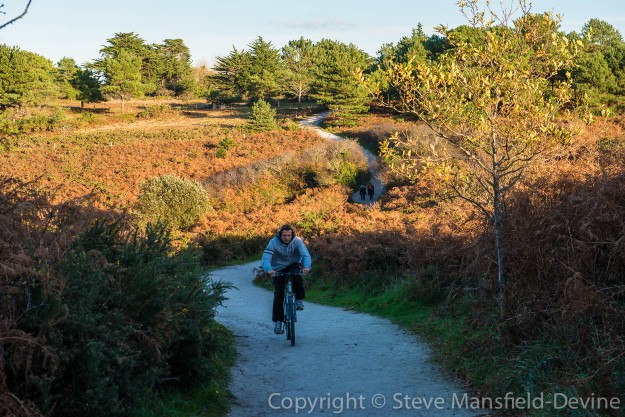 We cycled this route three times – the first time starting from a point half-way along where we could park our car. That allowed us to take our young dog, Cézanne, with us. (Zola, the 15 year-old, stayed tucked-up in the gîte). The other two times, however – and with not a little guilt – we left both dogs at home. Not having to constantly stop and restrain Cézanne meant we could ride faster and soak in more of the views.

Not long after the section you see in the picture above, the route meets the road to a parking spot right on the headland. And that’s where your efforts are rewarded. 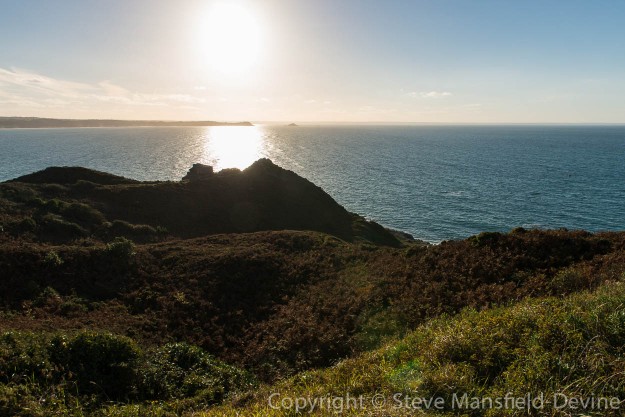 On the first ride, we stopped at a tiny cottage (probably used by customs men). We couldn’t go further – down to the parking spot on the Cap d’Erquy proper – because of having the dog with us. 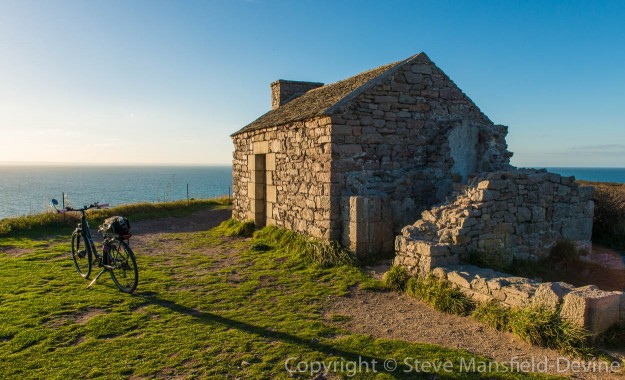 We rode this route on the final day of our trip. Although it was November, we’d been blessed with dazzling blue skies and high temperatures. On the first two rides, I wore my Endura jacket with the zip fully open and only a t-shirt beneath – and still worked up a sweat, even on an e-bike. The final day was a little more cloudy, although the threats of rain came to nothing. The sunset was gorgeous.

We cherish the memories of every trip we’ve made to Brittany. But somehow, riding through the landscape – and especially by the sea – on our bikes made the experience more powerful, more vivid. This is one ride we’ll remember for a long time. 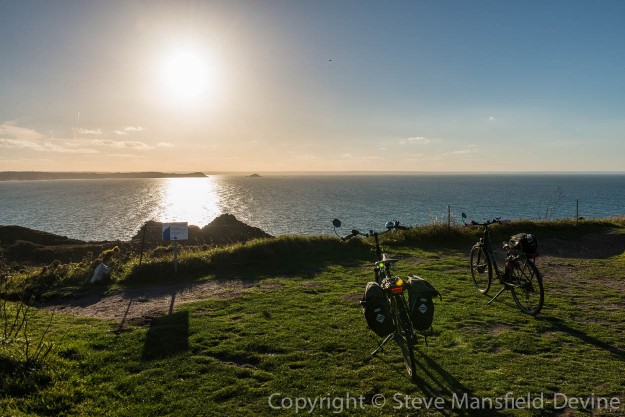